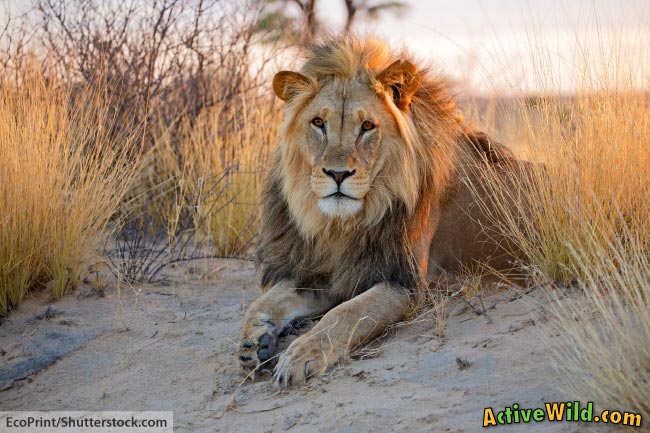 Lion facts, pictures, information and video. The male lion, with its long mane and proud stature, is one of the most easily-recognizable animals in the world. Lets earn about this incredible African predator.

Facts about lions for kids (and adults!)

Lions are big cats, in more ways than one! Lions are members of the cat family. The scientific term for this family is ‘felidae‘.

A member of the felidae family is called a felid.

The term ‘big cats‘ is often used to separate larger members of the felidae family, such as lions, tigers and jaguars. from the smaller members.

Lions are the second largest felids, being slightly smaller than tigers.

An adult male lion may weigh around 225kg, and measure more than 3 metres from nose to tail.

The lion’s golden colour provides camouflage when it is hunting. A thick band of darker hair grows around a male lion’s neck and shoulders. This is known as a mane. Lions’ manes can vary in colour and size; some male lions appear not to have manes at all.

Female lions, known as lionesses, are smaller than the males, and do not have manes.

Lions are at the top of the food chain. This means that an adult lion has no natural predators.

Lions are mainly nocturnal (active during the night). Lions hunt at night because it’s often too hot during the day.

Lions spend the day sleeping and resting in the shade.

Where Do Lions Live?

Lions are found in the wild in southern and eastern Africa. A very small colony also lives in the Gir Forest National Park in western India.

Lions used to be much more widespread. 2,000 years ago they were even found in Europe. However, thanks mainly to the spread of man, there are far fewer lions in the wild nowadays.

A Pride Of Lions

Unlike other felines, the lion is a social animal and often lives in groups known as prides. There can be as many as 30 lions in a pride, but most prides are smaller.

A typical pride consists of one adult male lion, several lionesses and younger lions of both sexes.

Male lions will often fight other males for their place in a pride. Larger prides can have two or even three males.

Some lions live and hunt alone.

Lionesses give birth to 2-3 cubs. When the young are born they are blind, and have spotted coats.

What Do Lions Eat?

How Do Lions Hunt?

Lions usually hunt at night, either alone or in packs.

A pack of lions can use a number of strategies to catch their prey. Sometimes the pack appears to split up, with some members pursuing prey animals into an ambush set by the others.

As we’ve found, lions can run very fast. However, they can’t run at full speed for very long, and are often not as fast as their prey.

This means that lions either have to sneak up on their prey, or lie in wait for it to get close enough to catch. Lions will wait for hours on end to catch their prey.

Lions can reach their top speed very quickly, and in a quick dash can often get to the prey before it has a chance to flee.

Lions are very strong; a swipe of their paw can be enough to bring down a smaller animal. Lions often kill by strangulation, clamping their powerful jaws around the neck of their prey.

A male lion has enough strength to drag a large animal in its jaws.

Lions are not officially an endangered species. However, their numbers are declining and they are considered to be a vulnerable species.

It is thought that there are only between 20,000 – 40,000 lions in Africa. This may sound a lot, but considering there are over 7 billion people, it is really a tiny figure.

Lions face two main problems. The first is that they are hunted by humans who are protecting their own farm animals. The other problem is that the animals that lions eat in the wild are themselves in decline.

Now that you know a lot about Lions, try these activities: