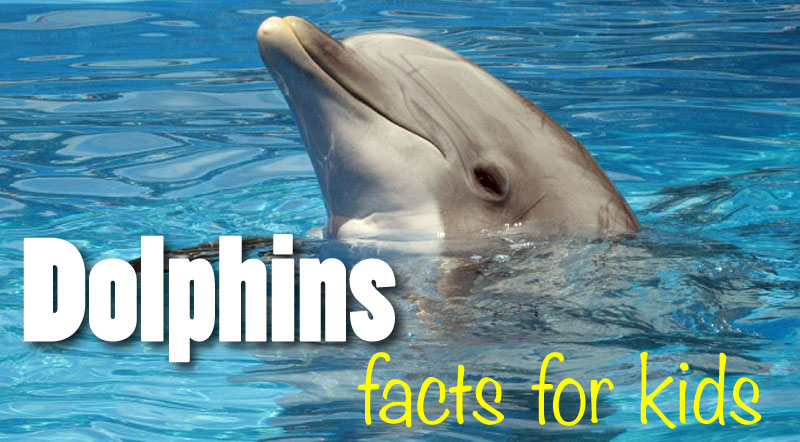 A dolphin is an aquatic mammal. Dolphins are extremely intelligent and sociable animals, and have their own way to communicate with each other using special sounds.

Dolphins have a playful and friendly nature, which makes them very popular with humans. Read on for more facts about dolphins for kids (and adults) …

Have you seen a dolphin in real life? They sometimes live in captivity, in zoos, aquariums or water parks. Perhaps you are lucky enough to have seen them in the wild. There are few better sights in nature than a group of dolphins swimming in the sea!

Although they are often mistaken for fish, dolphins are actually mammals. They are members of the Cetacea (pronounced set-ay-shia) family, which also contains whales and porpoises.

One way of telling the difference between a cetacean and a fish is by looking at their tails. You can tell a cetacean because their tail fins (called flukes) are horizontal, and move up and down. Fish have vertical tails which move from side to side.

Watch the video below to see how a dolphin swims.

The most common type of dolphin is the bottlenose dolphin, which has the scientific name Tursiops. The bottlenose dolphin gets its name from its short and stubby beak. They measure around 6-12 feet (2-4 metres) long and can weigh anywhere between 300 and 1400 pounds (135 – 650 kg). Male dolphins are larger than females.

A dolphin’s body is designed to help them move quickly and easily through water. The dolphin’s fluke propels it through the water. On its back is a curved dorsal fin and on each side of the dolphin is a pectoral fin. The bump on a dolphins head is known as the melon.

Dolphins are very sociable and like to spend time together. They usually live in groups of around 10 – 12 members. These groups are called pods. The female members of the family are called cows, the males are called bulls and young dolphins are known as calves. Pods help dolphins to form bonds and protect each other.

Dolphins are also very playful creatures. They have been spotted chasing each other and tossing around objects such as seaweed. They often leap out of the water, ride waves and pop their heads above the surface to look around (this is known as spy-hopping).

Dolphins use a type of sonar to detect where objects are around them. This is called echolocation. Echolocation works when a dolphin bounces a high pitched sound off an object and then listens for the echo to come back. It is a very useful way for dolphins to find food and navigate.

How intelligent are dolphins?

Dolphins are often thought of as one of the world’s most intelligent animals. They have bigger brains than humans.

How do dolphins communicate with each other?

Dolphins communicate with each other through clicks, squeaks and whistles. They use these special sounds to greet each other and to indicate if they are in distress.

How do dolphins breathe?

Dolphins live in the sea, but they can’t breathe under water! They breathe through a blowhole and have to come up for air every 15 minutes.

Where do dolphins live?

Most dolphins are marine mammals – this means that they live in the sea. They can be found in oceans all over the world. Dolphins usually stick to shallow areas of water found along coastlines and continental shelves. They like to live in warm, tropical water such as the Indian Ocean but dolphins can even be found in the seas around Scotland!

There are also some species of dolphins that live in rivers. River dolphins can be found in locations such as the Ganges River and the Amazon River.

What do dolphins eat?

Dolphins are carnivores. They live off fish, squid and crustaceans that they find in the sea. Using their echolocation skills, dolphins usually work together in their pods to find fish. They trap large groups of fish and take turns to hunt and eat as many as they can. Although they have teeth, dolphins usually swallow their food whole.

In a normal day, a dolphin will eat up to 30 pounds of food!

There are over 40 different species of dolphins in the world. This includes marine dolphins that live in the sea as well as river dolphins.

If you have seen a dolphin in real life, it was probably in captivity. Many zoos, aquariums and waterparks keep dolphins and train them to perform in shows.

Dolphins kept in captivity for this purpose are usually treated very well, and seem to enjoy entertaining people. Many people who would otherwise never have seen a dolphin are able to get close to them and learn more about them. This may in turn help raise awareness of dolphin conservation efforts.

However, many people think that dolphins should not be kept in captivity, and argue that an intelligent animal would prefer life in the wild and should not be contained in a small area.

It is impossible for us to know what a dolphin is really thinking. Although they may seem to be enjoying performing, we don’t know what the effect of being in captivity really has on a dolphin.

What do you think? Is it right to keep dolphins in captivity? Both sides have valid arguments and there is no real right or wrong answer.

Some species of dolphins are becoming endangered because of human behaviour.

The biggest threat to the dolphin population is fishing. Nets from fishing boats are very dangerous to dolphins because they can get accidentally caught up in them and drown. In some countries, dolphins are even illegally hunted as a source of food.

Human pollution is another big threat to dolphins. Waste and chemicals poured into the ocean can make dolphins sick and reduce their ability to fight infections and diseases.

How can we help dolphins?

Learning about dolphins is a great a start. If more people know about dolphins, there will be more awareness of their threats. There are many groups around the world that are dedicated to protecting wild dolphins by reducing hunting and pollution.

10 facts about dolphins for kids

We hope that you have enjoyed these facts about dolphins for kids. Now that you’ve learned everything there is to know about these amazing creatures, try these fun activities: