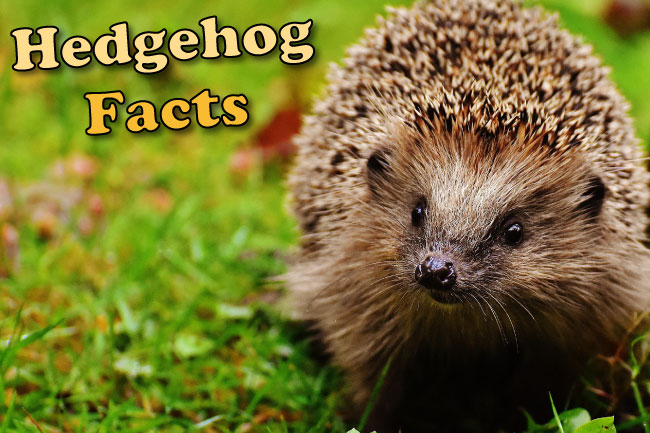 Hedgehog facts for kids and adults. On this page you’ll discover where hedgehogs live, how many species of hedgehog there are in the world, animals related to hedgehogs, and much more …

Hedgehog Facts at a Glance

Hedgehogs are small spiny mammals in the subfamily Erinaceinae. Sixteen species of hedgehog are currently recognized. They are found in the wild in Europe, Asia, and Africa. Hedgehogs have also been introduced in New Zealand, and are kept as pets in other parts of the world.

Most hedgehogs are nocturnal (active at night). Hedgehogs spend most of the day asleep, hidden deep in the undergrowth, often in dens that they have excavated themselves.

Hedgehogs have poor vision, and rely mainly on their excellent sense of smell to find food. Hedgehogs use their long snouts to root around the leaves and to capture and manipulate their food.

Hedgehogs are solitary, only coming together to breed. Males often act aggressively towards one another when they meet. Hedgehogs make grunting and snuffling sounds while foraging in the undergrowth.

Depending on the species, hedgehogs can have up to 6000 spines. The spines are modified hairs. They are hollow and made of a material called keratin. (Your fingernails are made out of the same material.)

When a hedgehog is born, it has a smattering of soft spines. These are hidden underneath a layer of swollen protective skin. The swollen skin soon shrinks to reveal the spines. Within a month, the soft spines are replaced with hard adult spines in a process known as ‘quilling’.

The hedgehog’s spines are defensive adaptation to protect it from predators. All hedgehogs are capable of rolling themselves up into a ball when threatened. This means that a predator risks injuring itself if it tries to make a meal of the hedgehog.

Hedgehog species with fewer quills (usually those found in warmer climates) are less able to defend themselves in this way, and are more likely either to flee from, or to attack, the predator.

Hedgehog Diet: What Do Hedgehogs Eat?

Hedgehogs mate shortly after waking from hibernation. The gestation period (how long a female hedgehog is pregnant) in between 4 and 6 weeks. Females give birth to between 1 and 11 young. Hedgehogs are blind at birth and totally reliant upon their mother. The male hedgehog plays no part in bringing up the young.

The young leave the nest after between 4 and 7 weeks. Females produce 1 to 3 litters per year.

Hedgehogs reach maturity after 9 to 11 months.

The sixteen hedgehog species are divided between 5 genera, as shown in the table below.

*** Confused by terms such as ‘order’, ‘family’ and ‘genera’? Check out our Animal Classification page, which has a free printable worksheet! ***

The genus Erinaceus includes the European hedgehog, Erinaceus europaeus. Although this species is common in mainland Europe, its population is severely declining in the UK.

Hedgehogs are in the family Erinaceidae. This family also includes the hedgehogs’ closest relations, the gymnures, which are also known as hairy hedgehogs or moonrats. Although related to hedgehogs, gymnures don’t have spines, and look more like rats.

Are Hedgehogs Related To Porcupines?

Another spiny animal that the hedgehog isn’t related to is the echidna, which is a marsupial.

Why Do Hedgehogs Hibernate?

All hedgehogs can hibernate, but those that live in warmer climates don’t always do so.

Hedgehogs living in colder climates hibernate during the winter. Depending on where they live, this can take place at some time between November and March. Hedgehogs hibernate to save energy because there is less food around during the colder months.

Hedgehogs prepare for hibernation by eating large amounts of food during the autumn. Hedgehogs often wake at least once during hibernation to move their nests.

What to Feed Hedgehogs?

Most hedgehogs are naturally lactose intolerant. This means that eating certain milk or dairy products may make them ill. If you find a poorly-looking hedgehog, don’t feed it bread or milk. If possible, call a local wildlife charity for advice.
Watch the video below to find out how to look after a hedgehog:

Some people keep hedgehogs as pets. The species most commonly kept as a pet is the African pygmy hedgehog.

We hope that you have enjoyed learning about these fascinating animals. If you live in an area in which hedgehogs are found, we hope that you are keeping an eye out for these secretive mammals.