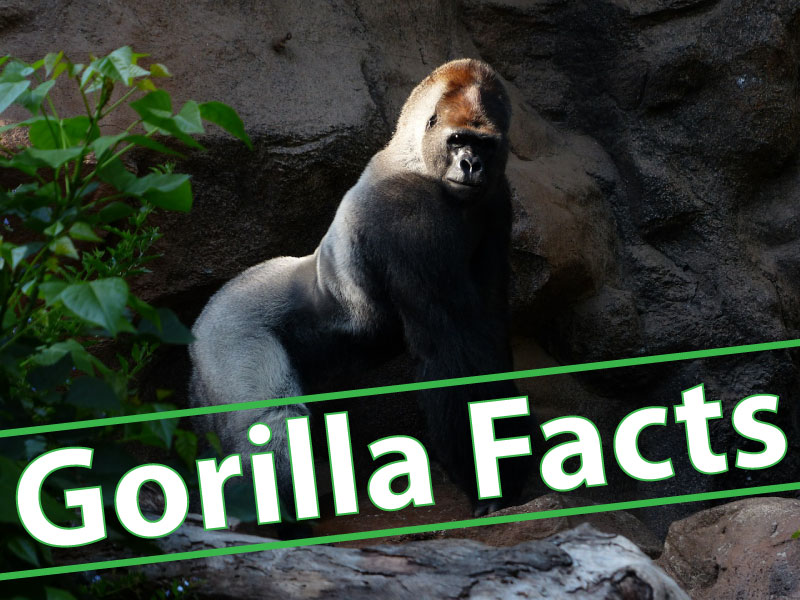 Want to know more about one of your close relatives? Read our gorilla facts for kids to learn about these fearsome, but peaceful, animals. This article is part of our African Animals series.

Gorillas are the world’s largest primates. They are members of the Hominidae family. This family is also known as the ‘Great Ape’ family, and also includes three other types of primate: orangutans, chimpanzees, and humans.

The Western Gorilla, despite having a larger estimated population of around 95,000, is rated Critically Endangered. This is because its population is declining faster than that of the Eastern Gorilla.

Gorillas live in the mountain and lowland forests of Central Africa. They live in small groups, led by a male gorilla known as a ‘Silverback’. The other members of the troop are females and young gorillas.

Larger troops may also contain one or more adult males, known as ‘Blackbacks’.
Silverback gorillas protect their troops against threats from other gorillas, and potential predators such as leopards.

Male gorillas are large, powerful animals, and can grow to be 1.8 m (almost 6 feet) tall, and weigh up to 180 kg (400 lbs). Females are significantly smaller.

Despite their fearsome appearance, gorillas are generally non-aggressive, and very rarely attack humans. Gorillas are herbivores (plant eaters), and eat a variety of fruit, shoots, and leaves.
Gorillas make nests out of branches and vegetation. These intelligent animals have also been observed using branches and other objects as simple tools.

Where can you find gorillas in the wild?

Gorillas live in Africa. Many of them live in the forests and swamps, some live in the mountains.

What is a Silverback gorilla?

How big do gorillas get?

What do gorillas eat?

Gorillas eat mainly plants. They eat seeds, leaves, and stems. A small portion of their diet ( the kind of food a person, animal or community usually eats) is made up of termites and caterpillars.

What color are gorillas?

Western subspecies ( a group of related animals that is smaller than a species) are brownish gray. Eastern and mountain subspecies have black fur. Silverback gorillas are black with silver hair down their backs.

How long do gorillas live?

Gorillas usually live to be 35 – 40 years old. The oldest gorilla ever recorded lived in a zoo and was 55 years old.

Do gorillas live alone or in groups?

Gorillas live in groups made up of a Silverback male, who is the leader, and several female gorillas and their offspring. Some males decide to leave the group and live alone.

Gorilla families tend to stick together. Gorillas laugh, play and even cry. They interact much like human families do. Young gorillas play together, usually biting and wrestling. Mothers feed and groom their offspring. Babies often ride on their Mother’s backs. Young gorillas spend a lot of time with their fathers. Fathers protect their young, and even let them sleep in their nests. Researchers have seen Fathers playing with their offspring, just like human fathers do. Overall, gorillas are gentle and shy.

How do gorillas communicate with each other?

Since gorillas live in areas with lots of vegetation (a group of plants), vocal communication is important. Gorillas start out communicating with their mothers when they are young. Babies grunt, scream, and cry out to get their mother’s attention. This helps mothers keep track of where their babies are, as well as let them know what their needs are. Adults vocalize as many as eight times an hour. These noises range from quiet grunts to screaming. Sometimes gorillas communicate by the way they stand, or by their facial expressions, just like people do.

What predators do gorillas have?

Gorillas have only one natural predator, the leopard. Occasionally, gorillas will fight, sometimes resulting in the death of another gorilla.

Why are gorillas becoming extinct?

Gorillas are becoming extinct for a variety of reasons. One is the fact that farming, and land development has destroyed their habitat. When forests are cleared, the rich vegetation that makes up a gorilla’s diet disappears. Poaching (hunting animals illegally) is another cause of a decrease in the number of gorillas. Poachers shoot entire groups of gorillas to steal the babies so they can sell them to zoos. People use the fur for clothing, purses, and other things. Poachers even cut off gorilla’s hands for trophies. Because of these things, there are not enough baby gorillas being born to keep the population growing.

How can we help the gorillas?

Just learning about these gentle giants is a start. When people see the importance of gorillas and how amazing these creatures really are, things will change. There are lots of groups around the world who are working to protect the gorillas. We need to stop poachers from shooting gorillas, and we need to stop buying items made from gorilla fur. Their future is up to us.

Gorillas are critically endangered. This means that they could go extinct in our lifetimes. Tell all of your friends about this, and ask your parents to support charities such as The Gorilla Organization. YOU can help to save this magnificent animal.

Pretend you are a scientist studying gorillas. Write a journal entry about a day you had following these creatures. Where did you go? What did they eat? What did they look like? Use information from this article to help you. Draw a picture of a gorilla you saw on your adventures.

Look up information on what’s being done to protect gorillas. Do your part to help. Raise money for an organization that helps gorillas. Have a car wash, a lemonade stand, or a bake sale.Make posters for your event. Ask your parents to help. Remember, the future of the gorillas depends on you.