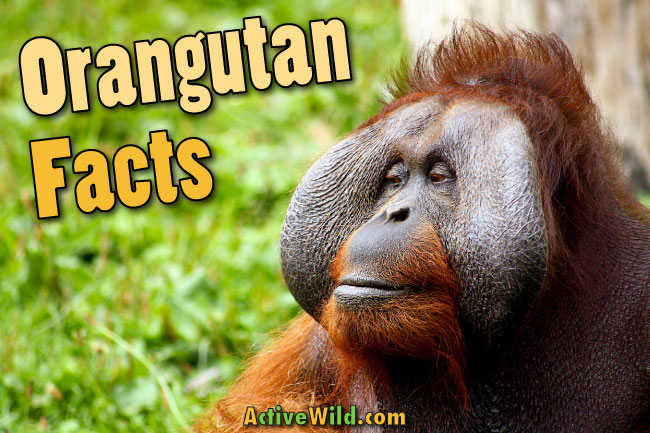 Orangutan Facts At A Glance:

Orangutans are large apes with distinctive red-brown hair. They live among the trees of tropical rainforests in Southeast Asia. Sadly, these intelligent primates are critically endangered, and their numbers are decreasing.

Orangutans have long, strong arms which reach nearly to the ground when the orangutan is standing. The arm span of a male is around 2 m (6.52 ft.). Orangutans’ hands are large, and their fingers long and strong.

Orangutans have opposable thumbs. This means that the thumb faces the fingers and moves in the opposite direction – allowing the orangutan to pick things up.

Our thumbs are opposable too. Take a look at your hands and notice how the position of your thumb allows you hold onto things.

Orangutans also have opposable big toes, which means that they can grip things with both their hands and their feet. (Sadly, our own big toes aren’t opposable!) Their legs are shorter than their arms, but their hip joints are just as flexible as their shoulders.

In a resting position, the orangutan’s fingers are curled. This means that it doesn’t have to use as much energy when holding onto branches.

The orangutan’s long, powerful arms, flexible hips and gripping hands and feet are all adaptations for an arboreal (tree-dwelling) lifestyle. Orangutans are the largest arboreal mammals, and spend most of their lives in the trees.

Adult male orangutans are considerably bigger than adult females, and dominant males develop fleshy ridges – called ‘flanges’ – around their faces. Males also have large throat pouches that amplify the loud calls that they make in order to attract females. Not all males develop flanges and throat pouches.

Orangutans lead more solitary lives than the other great apes. Although they often interact with each other, they don’t live in troops as do their relations the gorillas and chimps.

Short-lived groups of adolescent males or females will occasionally form, but adults of both sexes generally live alone.

Adult females are more social than adult males, often living in territories that overlap those of female relatives.

Males with cheek flanges are the most solitary orangutans of all. They usually only come together with other orangutans in order to mate with females, or to protect their territories from other males.

A dominant male orangutan’s territory will include that of several females, and he will be their main mating partner.

Orangutans move by swinging from branch to branch and climbing with their strong, flexible limbs.

At night, orangutans sleep high in the trees in nests that they have made from leaves and branches. They usually build a new nest every night, and only rarely reuse a nest. Orangutans learn how to build nests by watching their mothers during the first few years of their lives.

Orangutans are among the most intelligent of all primates. In the wild they use a variety of tools (made from sticks and other items found in the forest) in order to extract insects from trees or seeds from fruits. They have also been seen keeping themselves dry with ‘ponchos’ they have made out of large leaves.

Captive orangutans, and those living near humans, have been known to copy human behavior. Orangutans who watched workmen building huts learned how to use a saw to cut wood!

Scientists have taught orangutans to make signs and to recognize symbols.

All three species of orangutan look broadly similar, and it was only fairly recently (1996 in fact) that the Sumatran and Bornean orangutans were split into separate species.

In 2017, a third orangutan species, the Tapanuli orangutan, was recognised.

Although the Tapanuli orang-utan lives on Sumatra, DNA testing showed that it was more closely related to the Bornean species.

All three orang-utan species are a similar size. In general, Bornean orangutans are more heavily built, and tend to weigh more than Sumatran orangutans.

Orangutans walk on all fours, but spend little time on the ground. Bornean orangutans are more likely to be seen on the forest floor; Sumatran orangutans have probably had to adapt their behavior due to the presence of Sumatran tigers. However, all orangutans spend most of their lives in the trees.

Tapanuli orangutans look more like Sumatran orangutans than Bornean orang-utans. Their hair is thicker & curlier, and their skulls and jawbones aren’t as robust as those of the other species.

Male Tapanuli orang-utans have moustaches and protruding beards, and their cheek pads are flatter and covered with thin blond hair. The Tapanuli orangutan’s diet includes plants not eaten by the other species.

Where Do Orangutans Live?

You can see the location of the islands of Sumatra and Borneo on the movable map below. Zoom out to find out where the islands are in relation to other countries.

Sumatra is part of Indonesia, a country made up of thousands of islands. Most (almost 75%) of Borneo is also part of Indonesia. The rest of the island is shared between two other countries: Malaysia and Brunei. The Indonesian part is called Kalimantan.

Orangutans are the only type of great ape found in Asia.

Watch this amazing video to see orangutans in the wild.

Orangutans belong to the family Hominidae, whose members are known as the ‘great apes’. There are five other species in the great ape family: eastern and western gorillas, chimpanzees, bonobos and humans.

That’s right: you and I belong to the same animal family as the orangutans! In fact we share around 97% or our DNA with them!

(DNA is a chemical that instructs our bodies how to grow).

All orangutan species are members of the genus Pongo. (A genus is a group of closely-related animals. Humans are in the genus Homo).

Confused by terms such as ‘genus’ and ‘family’? Check out our Animal Classification article.

What Do Orangutans Eat?

An orangutan’s favorite food is fruit. It eats a variety of different fruit, including jackfruit (the world’s largest fruit from a tree), and durians, which are famous for their strong, unpleasant smell.

Orangutans will also eat a variety of other plant matter, including leaves, bark and shoots. Their diet also includes insects and bird eggs.

Male and female orangutans generally only come together in order to mate. Females reach maturity earlier than males, and begin to produce offspring at around fourteen to fifteen years of age.

Females are pregnant for 9 months. Infants are carried everywhere by their mothers for the first few months of their lives, and remain totally reliant on their mothers until they are around 2 years old. At this age their climbing skills are sufficiently developed to allow them to climb unaided. Males play no part in the rearing of their children.

Orangutan infants are only weaned at four to seven years of age. Orangutans are very slow to reproduce, with gaps of between 6.1 and 7.7 years between children for Bornean orangutans, and 8.2 to 9.3 years for Sumatran orangutans.

This means that it is incredibly difficult for orangutans to bounce back if large numbers are lost due to hunting, forest fires or deforestation.

The typical lifespan of an orangutan is between 30 and 45 years in the wild, and up to 60 years in captivity.

Why Are Orangutans Endangered?

All three orangutan species are critically endangered. According to IUCN estimates in 2016, there are only around 104,700 Bornean orangutans and 13,835 Sumatran orangutans left in the wild.

The number of Bornean orangutans in the wild decreased by over 60% between 1950 and 2010, and a loss of a further 22% of the population is projected to have occurred by 2025. The Sumatran orangutan population is also in decline.

The primary reason for the decline in orang-utan populations is habitat loss due to deforestation. Forests are cleared to make way for oil palm plantations and other industrially farmed crops. Logging for timber is another major cause of deforestation. Forest fires have also led to large areas of forest being lost.

Unbelievably, hunting is still a factor in the orangutan’s decline. Despite their critically endangered status, both species of orangutan are still being targeted by local hunters for their meat. It is thought that over 2,200 Bornean orangutans are killed every year by hunters.

How To Help Orangutans

There are several things you can do to help orangutans. Perhaps the most important is to stop buying products made with palm oil. Palm oil is found in a wide range of products, from snacks to cosmetics. If everyone in the world stopped using palm oil products, the rate of deforestation would slow down dramatically almost overnight.

The second thing you can do to help orangutans is to spread the word! The more people who know how much trouble orangutans are in, the more likely something will be done to help. Why not make a poster, or give a presentation to your school?

Thirdly, you can help by donating or raising money for an orangutan charity. Organizations such as the Orangutan Foundation and the Orangutan Project are at the forefront of orangutan conservation. If you’ve got some time on your hands, you can even volunteer and work for them directly! Check out their websites for details.

It doesn’t say much for our own species that the orangutan’s critically endangered status is largely down to us. Let’s spread the word and help reverse this magnificent creature’s decline!