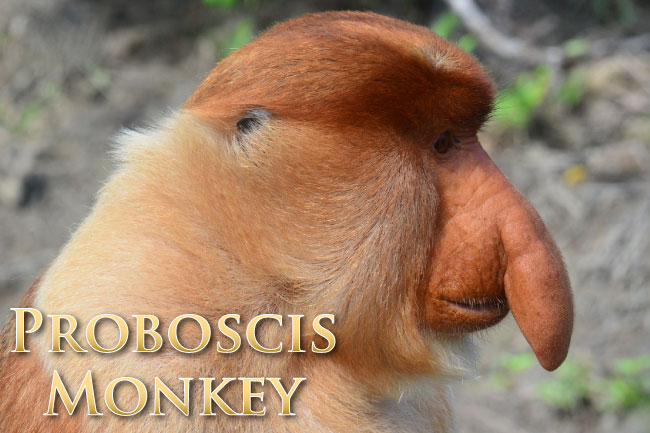 Proboscis monkey facts, pictures and information. Famous for its long nose, this bizarre-looking primate inhabits rainforests on the island of Borneo. Due to deforestation the species is now endangered.

Read on to find out more about the proboscis monkey …

Proboscis Monkey Facts At A Glance

The proboscis monkey has a coat of long, pale orange-brown fur. Its limbs and tail are gray, and its face is hairless and light pink in color. Both sexes have big, bulging bellies, long tails, and partially webbed fingers and toes.

The male can be up to twice the size of the female, and has a long, fleshy nose that hangs over its mouth. Females and juveniles have smaller (but still noticeably large), upturned noses.

One theory to explain the male’s enlarged nose is that it amplifies the monkey’s call, and that males with louder calls are more attractive to females.

Watch the video below to see proboscis monkeys in the wild:

The proboscis monkey is only found on Borneo, a large South East Asian island which is divided among three countries: Indonesia, Malaysia and Brunei.

You can see where the proboscis monkey lives on the map below:

Most of the islands proboscis monkeys live in coastal regions and along rivers.

The proboscis monkey spends most of its time in trees near a body of water. It can be found in various types of waterside forest, ranging from coastal mangroves to palm swamps. The monkey’s range is larger during the rainy season.

The species is rarely found far from a water source, and keeps to low elevations. It is unlikely to be seen in areas over 350m (1,148 ft.) above sea level.

The proboscis monkey walks on all fours and is a capable climber. It spends most of its time in the trees, and will leap from branch to branch as well as climb in order to get around.

The proboscis monkey is the most aquatic of all primates. It wades across shallow water with its arms raised above the surface. When presented with deeper water the monkey will swim, using its partially webbed hands and feet in a powerful dog (monkey?) paddle. It is capable of crossing rivers in this way.

The proboscis monkey can swim underwater, and has been recorded traveling as far as 20m (65.6ft) below the surface. It will also dive into the water from the trees, and has been seen leaping from heights of up to 15.2m (50ft).

The proboscis monkey lives in troops of 9 to 30 individuals. The troop consists of a single dominant male, several adult females, and young of both sexes. All-male ‘bachelor’ groups exist, and males will also live alone. Individuals of both sexes are known to move between troops.

Home ranges of troops vary in size from 1.3 to 9 km2 (0.5 to 3.5mi2) and overlap extensively. The proboscis monkey exhibits very little territorial behavior, and troops often come together where food is plentiful. They may also travel together during the day and gather at sleeping sites at dusk.

The dominant male will defend his group against potential threats, calling loudly and baring his teeth at the perceived aggressor.

Proboscis monkeys usually mate between November and February, with births occurring between March and May, after a gestation period of 166 to 200 days.

The female gives birth to a single infant that stays in its mother’s care for about a year. The young are born with dark fur and blue faces. The adult coloration begins to emerge at around 3 to 4 months of age. At six weeks, the young start to eat solid foods, with weaning occurring at seven months.

The proboscis monkey uses a variety of vocalizations (vocal sounds) to communicate with other troop members. These include a special honk used only toward infants, and loud alarm calls that signal danger.

What Do Proboscis Monkeys Eat?

The proboscis monkey’s diet consists mainly of young leaves and unripe fruit. From January to May fruit make up the bulk of the monkey’s diet. During the latter part of the year it mainly eats leaves.

The proboscis monkey has been recorded feeding on over 90 different plant species. As well as fruit and leaves, it will also eat seeds, bark, flowers and insects.

The pot-bellied appearance of the proboscis monkey is due to its specialized chambered stomach, which contains bacteria for digesting the tough cellulose found in leaves. Proboscis monkeys are also known to chew cud (regurgitated food) to aid the digestive process.

Breaking down tough leaves takes a lot of time, and the contents of a proboscis monkey’s stomach can make up as much as a quarter of its total weight.

Few predators target the proboscis monkey due to its large size and arboreal (living in trees) lifestyle. Animals that are known to prey on the monkey include the clouded leopard (Neofelis nebulosa) and crocodilians such as the false gharial (Tomistoma schlegeli) and saltwater crocodile (Crocodylus porosus).

Young monkeys may be targeted by birds such as the crested serpent eagle (Spilornis cheela), monitor lizards and pythons.

Is The Proboscis Monkey Endangered?

The proboscis monkey is rated as ‘Endangered’ by the IUCN.

Despite having a protected status in all regions of Borneo, the proboscis monkey’s numbers have plummeted throughout its range. The largest number of proboscis monkeys is found in Kalimantan, the Indonesian part of Borneo.

The proboscis monkey is threatened by:

Now that you’re a proboscis monkey expert, why not find out about more awesome animals? Check out these pages: