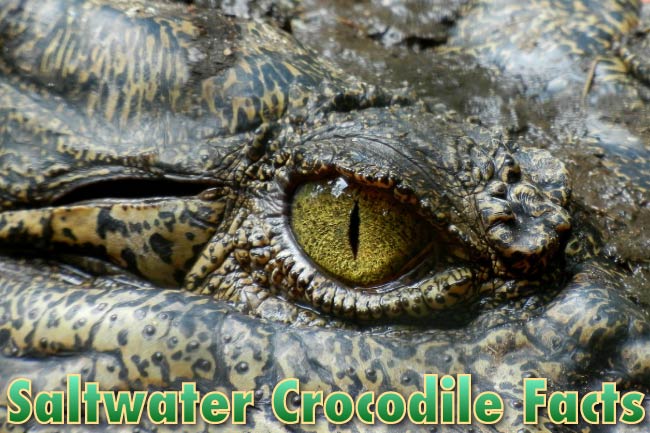 The saltwater crocodile is the world’s largest species of crocodile. These huge reptiles can grow over 6 metres long. Saltwater crocodiles are top of the food chain wherever they are found, and sometimes even attack humans! This page contains Saltwater Crocodile facts for kids, and is part of our Australian Animals series.

You can see just how fierce a Saltwater Crocodile can be in the video below. The cameraman almost runs away at one point!

The Saltwater Crocodile is also known as the Estuarine or Indo-Pacific Crocodile. In Australia it is commonly referred to as a ‘Saltie’.

There are currently 15 recognised species of crocodile. The saltwater crocodile is the longest and heaviest … and also the most aggressive!

Crocodiles, together with alligators and gharials, are in the order ‘Crocodilia’. (An ‘order’ is a group of related animals.)

Crocodilians (animals in the order Crocodilia) have been on the Earth for millions of years.

Crocodiles are more closely related to birds and dinosaurs than to other reptiles. If you want to see the past then look at a crocodile: they haven’t changed much for 80 million years.

Early members of the crocodile family lived over 200 million years ago.

Most Saltwater Crocodiles are around 5 metres (16 ft) long, and weigh around 450 kilograms (990 lbs). However, larger specimens can grow to around 7 metres (23 ft) long.

Female saltwater crocodiles are smaller, around 3 m (10 ft) in length.

Baby saltwater crocodiles are a pale yellow-green, with black stripes and spots. As they get older, the crocodiles become much darker, and are less marked.

How Fast Can Saltwater Crocodiles Run And Swim?

Have you ever been told that a crocodile would be able to outrun you on the land?

Although Saltwater Crocodiles have short legs they are still able to run up to 8.7 mph (14 km/h) over short distances.

However, most adult humans could outrun a Saltwater Crocodile.

Oh, and run in a straight line, too. Zig-zagging won’t help.

This is why you need to be careful getting too close to the water’s edge when there are crocodiles about. Although you could outrun it over open ground, in the slippery conditions near the water it’s the saltie that has the advantage.

It uses its tail and legs to ‘explode’ out of the water and grab its victim before it has time to react.

Where Are Saltwater Crocodiles Found?

The saltwater crocodile is found in India, Southeast Asia and Australia. Countries with Saltwater Crocodile populations include India, Bangladesh, Sri Lanka, Burma, the island of New Guinea and Australia.

In Australia, ‘salties’ are found in the northern parts of Western Australia and the Northern Territories, and in North and East Queensland.

Despite their name, Saltwater Crocodiles can live in freshwater as well as salt water. They are found in rivers, swamps and mangrove forests in coastal areas. Take care if you are near a billabong in Australia: they’re favourite Saltwater Crocodile haunts.

(A ‘billabong’ is an Australian word for a pool or small lake that has been left after a river changes course.)

Saltwater Crocodiles are capable of swimming long distances and have been found far out at sea.

See how the crocodile approaches this food. It is virtually silent as it moves through the water.

The Saltwater Crocodile is an ambush hunter. It remains hidden under the water until its victim is very close. The crocodile will the ‘explode’ out of the water before the victim has a chance to react.

Although larger crocodiles are able to take larger prey – including animals as large as buffalo – they will still eat smaller animals.

Smaller crocodiles are able to take prey that weighs well over half of their body weight.

Saltwater Crocodile nests are simply piles of mud and vegetation. They are usually situated on riverbanks or near the water in swamps. Female Saltwater Crocodiles usually lay one brood of eggs each year, in the rainy season. Around 40 to 60 eggs are laid and covered in the nest.

The female Saltwater Crocodile guards the nest from egg-thieving animals. When the eggs hatch, she will carry the hatchlings to the water in her jaws.

We hope that you have enjoyed reading these Saltwater Crocodile facts for kids. The size, ferocity and incredible bite strength of these apex predators make them a truly awesome animal. From more information about amazing Australian animals, visit page: Australian Animals.