Asian black bear facts, pictures, video and in-depth information. The Asian black bear is found in many parts of Asia. It is a capable climber and spends as much as 50% of its life in the trees. Although primarily herbivorous, it is a large, aggressive animal and can be dangerous to humans.

Let’s find out more about this amazing ursid…

The Asian black bear is a medium-sized bear found in Asia. It is a close relative of the American black bear (Ursus americanus), and the two are very similar in appearance.

There are seven recognized Asian black bear subspecies. There are slight variations in color, markings and size between each subspecies, and they are found in different areas.

The Asian black bear is one of the eight living species of bear. Together they make up the family Ursidae (individual members of which are known as ‘ursids’). Bears are mammals, and members of the order Carnivora. 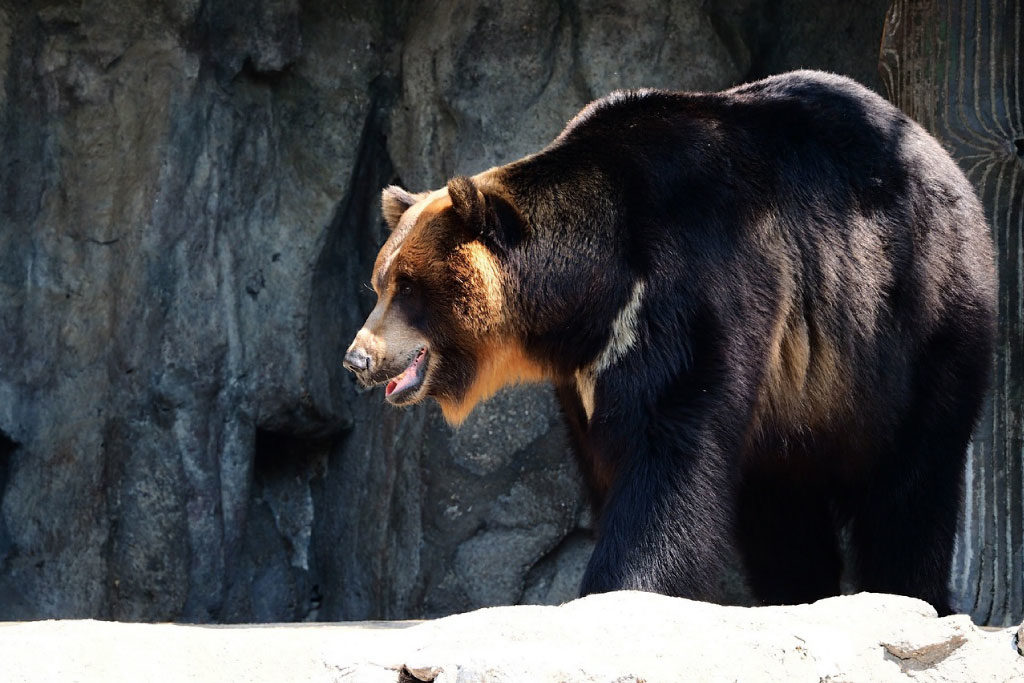 Like all bears, the Asian black bear is a sturdily-built, powerful animal. Its shaggy coat is usually black in color, although a few rare brown individuals have been documented. The muzzle is light brown, and the chin whitish. Around the neck is a ruff of longer fur.

On the Asian black bear’s chest is a distinct white, cream or yellow patch. This is often shaped like a V. The shape is said to look like a crescent moon, which is why the animal is sometimes called the moon bear.

The Asian black bear’s ears are large and round, and proportionally larger than those of any other bear.

The species has short hind legs but a powerful upper body, making it a natural tree climber. The bear’s long, curved claws are another adaptation for climbing.

You can see what the Asian black bear looks like in the video below.

The Asian black bear is only found in Asia. The species is present throughout most of mainland Southeast Asia (except for Malaysia). The eastern part of its range forms a narrow band through Iran, Afghanistan, Pakistan, India, and Myanmar. To the north its range extends to northeastern China, North Korea and the south of Russia’s Far East.

Small, isolated Asian black bear populations can also be found on the Japanese islands of Honshu and Shikoku, and on Taiwan and Hainan.

The Asian black bear is found in a range of forest habitats. The bear’s choice of habitat is dependent on geographical location; the species may also be found in alpine meadows and dry, sparsely forested steppe in some parts of its range.

The Asian black bear is typically found at sea level to elevations of 3,700 m (12,000 ft.). It migrates to lower ground during the winter months in the northern parts of its range. The bear often moves between habitats in search of food as the seasons change. 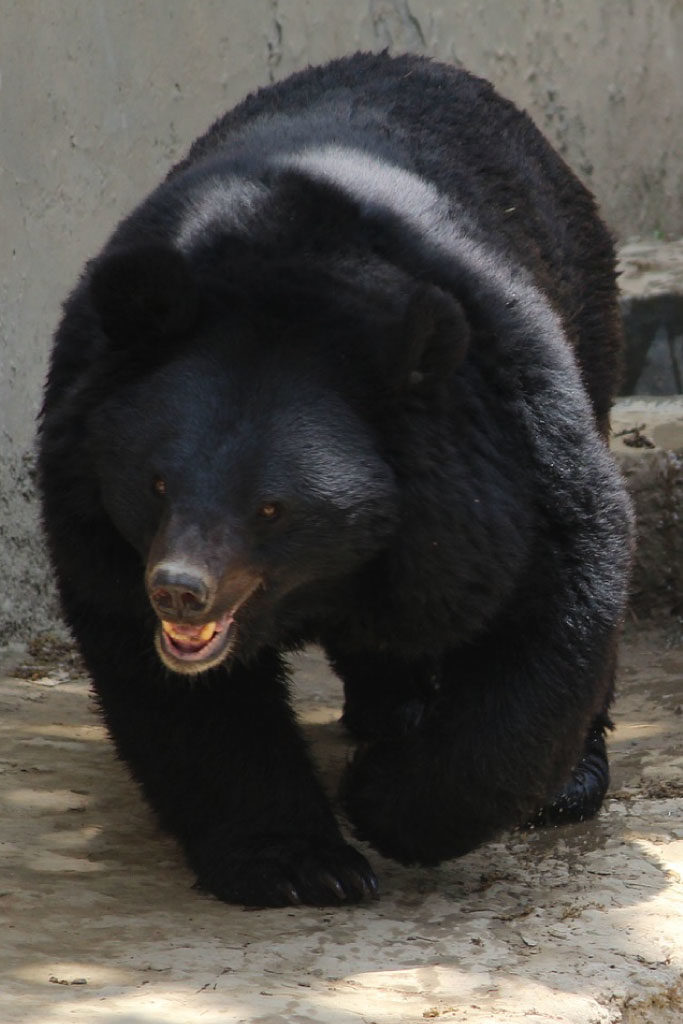 The Asian black bear is typically active during the day. Bears that live near humans may alter their behavior and become more active at night.

The Asian black bear is the most arboreal (tree-dwelling) of the bear species. Depending on the region in which it is found, it may spend as much as half of its time in the trees. It climbs trees to forage for food, to rest, and to avoid predators.

The species breaks off branches and twigs to support itself when climbing. One sign that Asian black bears are present in an area is the nest-like platforms that they have built in the trees.

The Asian black bear is solitary, only seeking out other individuals during the mating season.

Pregnant female Asian black bears hibernate during the winter. Males and other females only hibernate in the northernmost reaches of the species’ range. In other areas they migrate to warmer areas during the colder months.

The bear’s den may be a ground nest, a hollow tree, a rock crevice or other natural cavity. The den is prepared in October, and the bear sleeps inside it from November to March. Where winters are especially harsh, the bears may enter their dens as early as October and emerge as late as May. Females with cubs are usually the last to emerge.

The Asian black bear mates during the summer (June to August). The gestation period lasts between 6 and 8 months, after which the female gives birth to a litter of 1 to 4 (usually 2) cubs inside the hibernation den.

The bear cubs weigh about 370 g (13 oz.) at birth and are born blind and hairless. They are weaned at around 6 months and become independent at 2 to 3 years of age.

What Do Asian Black Bears Eat?

The Asian black bear is an omnivore. It is opportunistic and adaptable, and feeds on a wide range of plant and animal matter.

The bear increases the proportion of insects (such as termites, bees and beetle larvae) in its diet during the spring. In the summer it feeds more frequently on fruits and berries. In the autumn, when the bear is preparing for hibernation, it forages for beechnuts, walnuts, hazelnuts and other nuts and seeds.

In tropical and subtropical areas, the bear feeds on fruit all year round.

Other foods eaten by the Asian black bear include bamboo shoots, grasses, honey, eggs, mushrooms, grains and wild ungulates (such as wild boar and water buffalo). The bear may also venture into orchards and farmland to feed on crops or to prey on livestock.

An adult Asian black bear’s size and aggressive nature means it has few natural predators. Only the tiger presents a major threat. In a surprise attack, a large tiger will usually overcome an Asian black bear. Without the element of surprise, much of the tiger’s advantage is lost and the bear may be able to see off the big cat.

Is The Asian Black Bear Endangered?

The Asian black bear is rated ‘Vulnerable’ by the IUCN.

The main threats to the species are habitat loss and hunting.

Habitat loss: Logging and deforestation for agriculture and road building is a major issue in many countries in which the bear is found.

Hunting: The Asian black bear is the most heavily targeted of all the bear species. Local people hunt the species for its gall bladder and bile (both used in traditional medicine), meat and fur.

The bears are also hunted as pests, and cubs are sometimes captured for the pet trade. Laws against hunting the species exist in all of the range countries, but are rarely enforced.