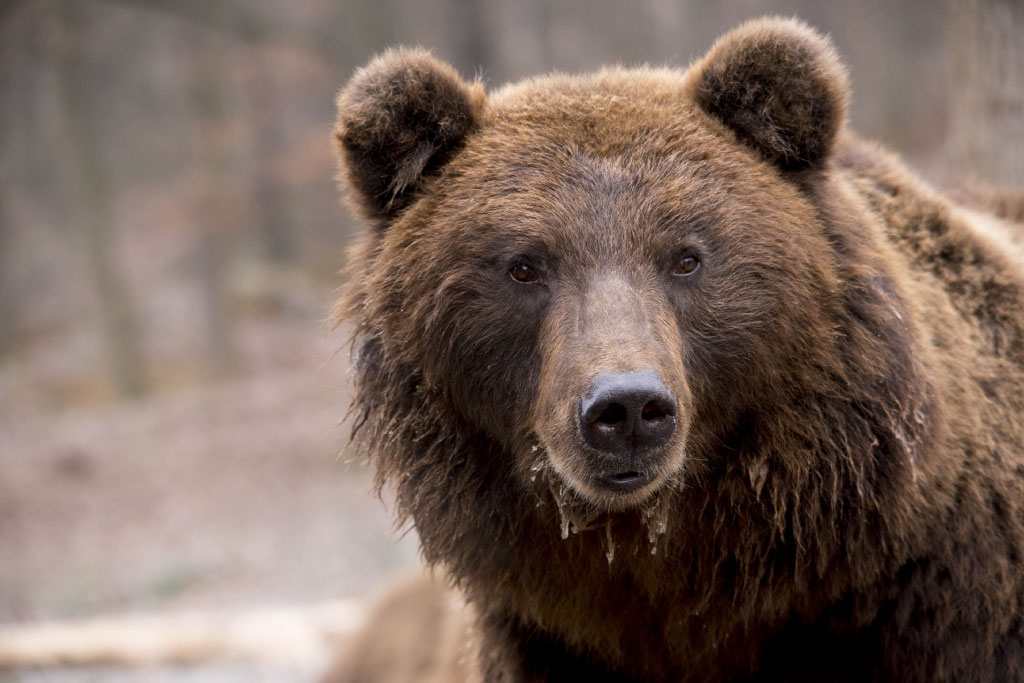 Brown bear information, pictures and facts. The largest brown bears compete with the polar bear for the title of ‘world’s biggest bear’. There are several different subspecies (types) of brown bear. Some of the best known include the grizzly bear and the Kodiak bear. Let’s find out more about this fearsome mammal …

Brown Bear Facts At A Glance

Watch the video below to see brown Bears in the wild. Would YOU like to get this close to a brown bear?

With its large, powerful build, shaggy brown fur and long claws, the brown bear is one of the world’s most famous – and most fearsome – animals.

The brown bear is one of the eight living species of bear. Along with the polar bear, it is the joint largest terrestrial (land-dwelling) member of the order Carnivora. (The largest carnivoran is the southern elephant seal.)

The brown bear is found in North America, Europe and Asia. At least 16 subspecies (types) are currently recognized. These include the Kodiak bear (the largest subspecies), the grizzly bear (perhaps the ‘most famous’ type of brown bear) and the Eurasian brown bear (the commonest type brown bear).

How To Recognize A Brown Bear

The brown bear is a large, powerfully-built animal. It has long thick fur, which is usually chestnut-brown in color, but which can range from pale golden brown to near black. Above its shoulders is a hump made entirely of muscle. This provides the bear with the immense strength it needs for digging and foraging for food. The shoulder hump is particularly visible on grizzly bears.

The brown bear has a large head with relatively small ears. The skull is heavily built and the teeth long and powerful. The brain is one of the largest of all carnivorans in proportion to body size.

The brown bear varies enormously in size, with the largest brown bear subspecies (the Kodiak bear) being a similar size to, or even larger than, the polar bear. The smallest brown bears can be as small as sun bears – the smallest bear species.

A brown bear’s weight also varies throughout the year. In the late summer / autumn, a brown bear can be double its springtime weight. Male brown bears can be up to twice the size of females. 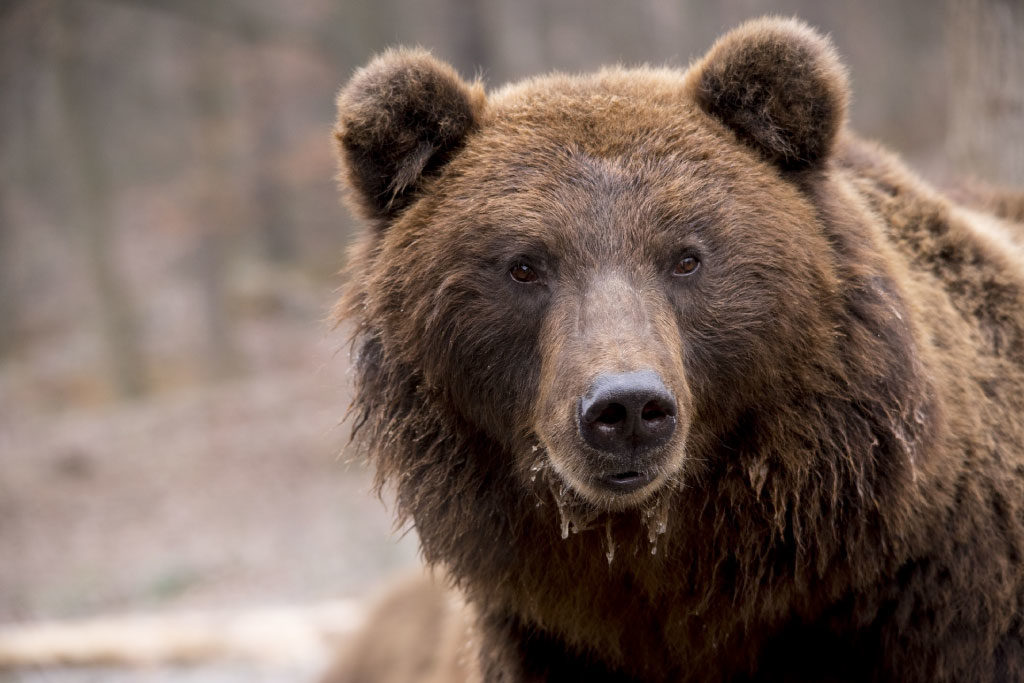 Where Do Brown Bears Live?

The brown bear has the largest range (i.e. the area in which it is found) of all bears. The species is present in North America, Europe and Asia. In Africa the species was hunted to extinction.

Russia has the world’s largest number of brown bears. It is thought that the country is home to over 100,000 brown bears.

Europe’s largest brown bear population (outside of Russia) is found in the Carpathian Mountains, a mountain range situated in Central and Eastern Europe. Most of the brown bears in this population live in Romania. Smaller numbers are present in Bulgaria, Slovenia and other Central / East European countries.

The brown bear is also present (in very small numbers) in some Western European countries, including Spain, France and Italy.

Asian countries in which the species is present include Japan and China, with smaller populations being found in India, Pakistan and some Middle Eastern countries.

The brown bear is found in a wide variety of habitats, including dry steppes (grasslands), open shrublands and many different types of forest (including rainforests).

Brown bears are similarly unselective about the altitude at which they live. They are found from sea level through to mountainous areas with elevations up to 5,500 m (18,000 ft.).

In North America, the brown bear shares much of its range with the American black bear. In the northernmost part of its range overlaps with that of the polar bear.

In Asia, the brown bear shares parts of its range with the Asian black bear.

The chance of confrontations between brown bears and both Asian and American black bears is diminished due to the brown bear’s preference for more open habitats, together with its more nocturnal lifestyle.

Brown bears are solitary but not strongly territorial. An individual can tolerate the presence of other brown bears in its home range.

Brown bears have large home ranges and travel seasonally to where food is available. Where food is particularly abundant, for example when salmon are spawning, large gatherings of brown bears can occur.

The brown bear is most active in the early morning and in the evening, but may be encountered at any time of day or night.

The brown bear retreats to its den and sleeps during the coldest months. During this time its heart rate slows from 70 to 10 beats per minute and its metabolism (the rate at which energy is used by the body) also slows down.

Despite this, the species is not a true hibernator. Its body temperature does not drop significantly and it is easily woken!

While sleeping, the bear lives off fat reserves built up over the summer and autumn. It recycles its waste products and neither urinates nor defecates the whole time it is denning!

The brown bear may spend between four and six months of each year hibernating.

The brown bear is an ‘opportunistic omnivore’. In other words it will eat just about any plants or meat that it can get its paws on!

Plant matter such as fruits, nuts and grasses makes up the majority of a brown bear’s diet.

The brown bear uses its extremely acute sense of smell to locate food, even that hidden under the ground. A bear will dig up plant tubers and bulbs, and will also excavate rodents from their holes.

Carrion is also on the menu for a brown bear, and the species will happily steal the prey of other animals.

The brown bear will also capture its own prey. Many varieties of deer are taken, including large species such as elk, reindeer and moose. It is thought that the brown bear may even favor the larger species, as they are less nimble and offer a bigger meal. However, it is usually the calves that are taken.

Other animals that are preyed on by that brown bear include sheep, goats and bison.

One of the most important sources of food for brown bears living in coastal regions is salmon. During the salmon spawning season vast numbers of the fish make their way upstream in order to breed.

Waiting for them are the brown bears, who congregate in large numbers to partake of this seasonal feast. The bears fight among themselves for the right to use the best fishing spots.

The availability of this abundant food supply explains the large sizes of brown bear subspecies such as the Alaska Peninsula brown bear and Kodiak bear.

The brown bear mating season occurs in May to July. During this time females communicate their readiness to mate via scent markings. Males, attracted by the scent, may fight to establish dominance.

The cubs are born in January and February, while the female is denning. There are usually 1 to 3 cubs in a litter (most commonly 2), but litters of 6 cubs have been reported. Brown bear cubs are born blind and hairless. They are completely dependent upon their mother, who provides them with milk for the first five months of their lives.

Female brown bears reach sexual maturity at around 4 to 8 years of age. Males need to attain a sufficient size to be able to outcompete other males before they can mate.

Is The Brown Bear Endangered?

Although the brown bear’s range is significantly smaller than it once was, the species is not currently threatened and has the IUCN conservation status ‘Least Concern’. It is estimated that there are over 200,000 brown bears currently alive.

Threats to the currently stable population of brown bears include habitat loss and illegal hunting (including hunting for body parts used in traditional eastern medicines).