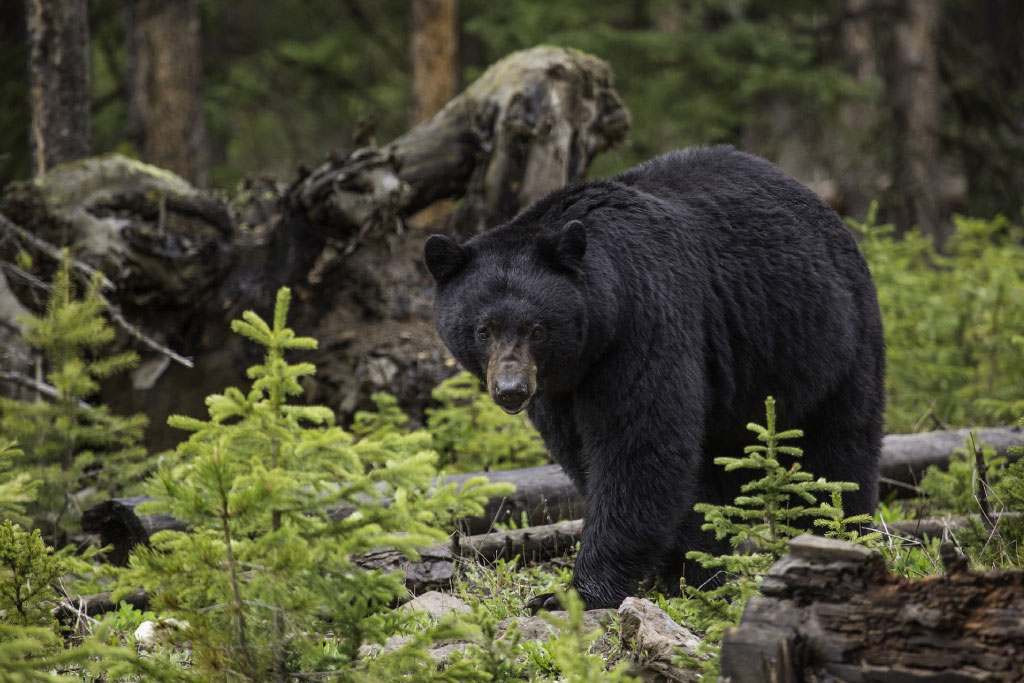 The American black bear is one of the three bear species found in North America (the other two being the brown bear and the polar bear). It is usually found in remote forested areas, and is a skilled climber. On this page you’ll learn all about the American black bear’s life-cycle, diet and behavior, as well as picking up some fascinating facts about the species …

Below you’ll find quick facts about the American black bear. Scroll down for in-depth information about the species!

Watch the video below to see American Black Bears in the Yosemite National Park:

What Is An American Black Bear? Introduction

The American black bear is one of three bear species found in North America (the other two being the polar bear and the brown bear).

Although the smallest of the North American bears, the black bear is still one of North America’s largest mammals. The largest males can reach weights of over 450 kg (over 1,000 lb.), and are larger than all other bear species apart from the polar and brown bears.

How To Recognize An American Black Bear

The American black bear is a powerful, solidly-built animal. It has medium-length, thick, shaggy black fur. (In some areas the species has dark brown fur.) The muzzle is long and light brown in color. The eyes are small and dark, the ears rounded. The paws are large, but proportionally smaller than those of the brown and polar bear. The tail is short and inconspicuous.

The American black bear’s paws are equipped with powerful, curved claws. Like those of all bears, the claws are non-retractable (i.e. they can’t be drawn back, cat-like, into the paw). They evolved for climbing, and are shorter and sharper than those of a brown bear.

The American black bear usually walks on all fours, but can stand on its hind legs to forage, climb, or to survey its surroundings.

The male American black bear can weigh as much as 50% more than the female, and stand over 1m (3.3 ft.) tall at the shoulder.

The American black bear’s eyesight and hearing are both better than those of a human. Its sense of smell is extremely powerful, and is thought to be around 7 times more sensitive than that of a dog.

Bears are members of the order Carnivora, a group of mammals whose members all share the same, meat-eating ancestor.

The closest living relations of bears are the canids (dogs and dog-like animals), pinnipeds (seals, sea lions and walruses), and musteloids (a group that contains animals such as weasels, badgers, otters and raccoons).

There are 16 subspecies of American black bear. Each lives in a different region and has slightly different physical characteristics such as size and coloration.

The Kermode subspecies of American black bear, Ursus americanus kermodei, is occasionally born with cream-colored fur. Individuals with this coloration are known as ‘spirit bears’.

Where Does The American Black Bear Live?

The American black bear is found in every Canadian province and territory apart from Prince Edward Island, where the species was hunted to extinction.

In Mexico, the American black bear is found in 6 states to the north of the country.

The American black bear usually inhabits remote woodlands and forests. Typical black bear habitat contains thick vegetation and abundant food. In the United States, the species is mainly found in mountainous areas, but can be present at any elevation from sea level to 3,500 m.

Habitats in which the American black bear is most likely to be present tend to have a plentiful supply of masts (that is, nuts such as acorns, beechnuts, hazelnuts and pine nuts). This type of food is particularly important to the bear in autumn, when it’s preparing to hibernate. During the autumn, an American black bear can spend up to 20 hours a day foraging.

Although the species is typically found in northern forests, including those in subarctic regions, it’s also present in subtropical areas such as Northern Mexico and Florida.

The American black bear usually forages at dusk or at night, but is likely to be active at any time of the day or night. Bears living near human settlements often become more exclusively nocturnal.

American black bears are highly arboreal (tree-dwelling), and spend much of their lives in the trees. Older bears tend to spend more time on the ground.

Black bears climb trees in order to forage for food, escape enemies, sleep and to rest.

The species is solitary, with individuals generally only coming together in order to mate. However, black bears will congregate where food is abundant. You’ll often find groups, for example, gathering around garbage dumps on the outskirts of towns.

The American black bear is territorial, and will mark its territory by rubbing itself against trees and leaving scent marks. It will use its powerful claws to make scratch marks in the trees. This allows the bears to establish dominance; the higher the scratch mark, the bigger the bear.

During the winter months an American bear will retreat into its den to hibernate. A black bear’s den may consist of a hollow tree, a cave, or any other secure area among vegetation or rocks or in the ground.

The amount of time spent in the den varies from region to region. Bears that live in colder climates may spend up to 5 months of the year in their dens. Those living in the southern boundaries of the species’ range may only spend a few weeks in their dens, if that.

The American black bear is a generalist, opportunistic omnivore; in other words it will eat just about whatever plants or meat it can get its paws on! The bear is extremely adaptable, and its diet varies from region to region.

Plant matter forms the majority of the American black bear’s diet. It will eat nuts, fruit, grasses and a variety of other vegetation. These guys aren’t choosy!

After plants, insects are the main constituent of the American black bear’s diet, both as grubs and in their adult form. The bear will also eat honey.

As well as scavenging carrion, the bear will also actively hunt animals such as deer. Usually, the bear will target only the slow-moving fawns, but adult deer are also taken.

Being an expert climber, the American black bear is also able to target bird nests for eggs and nestlings.

Whereas a brown bear is able to hold its own during an encounter with a wolf pack, a black bear will usually fare less well. A pack of wolves will often overcome and even kill a black bear.

Pumas, however, are dominated by black bears, who often steal the cat’s kill. In the southernmost parts of the bear’s range, it may be targeted by jaguars, although such attacks are rare.

The American black bear mates in early to mid-summer. Males may fight one another for access to a female.

The female gives birth around 7 months later in late January or early February. She will awake from hibernation and give birth while in the den. The female usually gives birth to twins, but litter size ranges from 1 to 5 cubs.

The cubs are reliant on their mother’s milk for 6 to 8 months, and will only leave when she’s ready to mate again, in the second summer after their birth.

The American black bear is most vulnerable as a cub, with around 1 in 5 not making their first year. The leading cause of infant mortality is predation by animals such as bobcats, coyotes, pumas and wolves, as well as by other bears.

Is The American Black Bear Endangered?

The conservation status of the American black bear is ‘Least Threatened’. It is estimated that there are over twice the number of black bears than that of all other bear species combined.

Hunting by humans is the leading cause of American black bear mortality. However, hunting is tightly controlled and has little impact on population size.