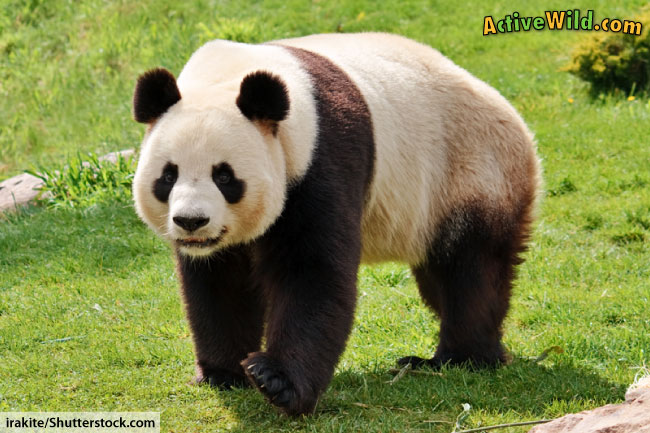 The giant panda, with its black and white fur and black eye patches, is a very distinctive animal. Most people in the world are able to recognise a panda. However, despite its popularity, the panda is an endangered animal, and rare in the wild.

This article has been written to help you find out more about these gentle giants. At the end of the article you’ll also find out 10 amazing panda facts for kids.

Be sure to watch the video of giant pandas in the wild!

All three names are used to refer to the same species of animal; the giant panda can also be called a ‘panda bear’, or just ‘panda’.

It’s up to you which name to use!

The ‘giant’ part can be added to differentiate between giant pandas and red pandas. (Red pandas are cat-sized animals, and are not members of the bear family).

Pandas are bears. They are members of the Ursidae family, which also includes polar bears and grizzly bears. Pandas are the least common type of bear.

Like all other bears, pandas are mammals. This means that they have fur and they give birth to live babies. Being a mammal also means that pandas take care of their young and feed them until they’re strong enough to take care of themselves.

Mother pandas look after their young until they are around 1 and a half to 2 years old.

A subspecies of giant panda, called Qinling pandas, have contrasting dark and light brown coats, rather than the black and white coats of their giant panda relatives.

Where Do Pandas Live?

Pandas live in bamboo forests on the hills and mountains of central China. They used to live in lowland areas of China too, but the spread of humans caused pandas to move to higher ground.

Typical panda habitat is high up in the mountains, where the climate is cold, wet and misty.

What Do Pandas Eat?

Pandas differ from other bears in that they are largely herbivorous. Their diet consists almost entirely of bamboo stalks.

Bamboo is not rich in nutrients, and pandas have to eat large quantities of bamboo every day. They can spend 12 hours a day just eating!

Pandas have specially adapted wrist bones for holding bamboo stalks, and strong jaw muscles for grinding up the fibrous plant. (The panda’s round face is due to the size of their jaw muscles.) Pandas also have large molars to help them chew bamboo, and their throats have a special lining to prevent bamboo splinters getting stuck. Pandas don’t need to drink water because the bamboo shoots provide them with all that they need.

How Big Are Pandas?

Full grown pandas are 2-3 feet tall (1.2metres) when on all fours, and around 4-6 feet long. Male pandas weigh about 250 pounds, females are smaller and weigh around 220 pounds.

Pandas are territorial, and use scent and claw marks on trees to define their territory. Pandas only come together during the breeding season. The males pay no part in raising the young.

Despite their size, pandas are good climbers and can also swim well. Although not aggressive creatures, pandas have been known to occasionally attack humans.

Why Are Pandas Endangered?

Pandas have been an endangered species for a many years. This is because much of the panda’s natural habitat has been cleared to make way for farms and other development. Once there were wild pandas living throughout China, but now they are restricted to the mountains.

How Many Pandas Are Left In The Wild?

It is difficult to know exactly how many pandas are left in the wild, but the number is very small. It is estimated that there are only between 1,500 and 3,000 pandas living in the wild.
Happily, conservation efforts seem to be paying off. Numbers of wild pandas are said to be increasing.

You can watch a film of pandas in the wild below.

Imagine Seeing A Panda In The Wild…

“You are a zoologist (an animal expert), and you have been invited to study pandas in the wild. You have walked far into the Chinese jungle. It is hard work pushing through the tall, tough bamboo plants. Bamboo is the main food of the panda, so you know you are in the right place.

Suddenly you hear something. You duck down behind a bush. Moving slowly between the bamboo stalks is a large creature. It stops, and looks around. Although you have never seen one in the wild before, it is very familiar.

The panda, with its black and white body and black eye patches, is unmistakeable. Although there are only very few pandas left in the wild, people all around the world know what they look like. You hope that your studies will help this beautiful animal.”

There is a special story about pandas in Chinese history. Legend says that pandas used to be only white, without any black on them. Once there was a small girl who tried to save a baby panda from a leopard. So the leopard attacked the girl instead and killed her. The baby panda was saved, but the pandas were really sad. When they went to the girl’s funeral, the pandas wore armbands of black ashes. When they wiped their eyes and hugged each other, they left smears of black ashes. This is where the black on their faces and bodies comes from.

1 thought on “Panda Facts For Kids”