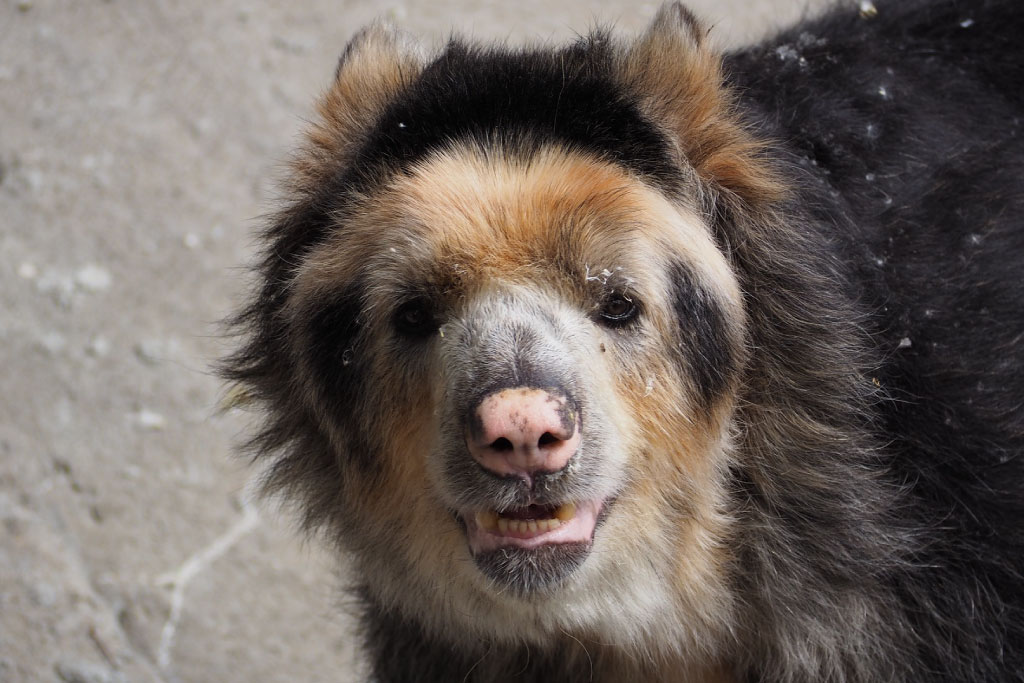 The spectacled bear is the only bear found in South America. This mid-sized bear is almost entirely herbivorous and spends much of its life in the trees.

Spectacled Bear Facts At A Glance

The spectacled bear is the only extant bear species found in South America. It’s also the only member of the bear subfamily Tremarctinae (the short-faced bears) to have survived to the present day.

You can see spectacled bears in the wild in the video below:

The spectacled bear is a robust, mid-sized bear. It has short, strong limbs equipped with strong, sharp claws.

The species gets its English name from the markings that encircle the eyes, resembling a large pair of glasses. The markings range in color from cream to orange, and usually extend to the bear’s throat and chest. They are highly variable in shape and unique to each individual (some bears lack them altogether). 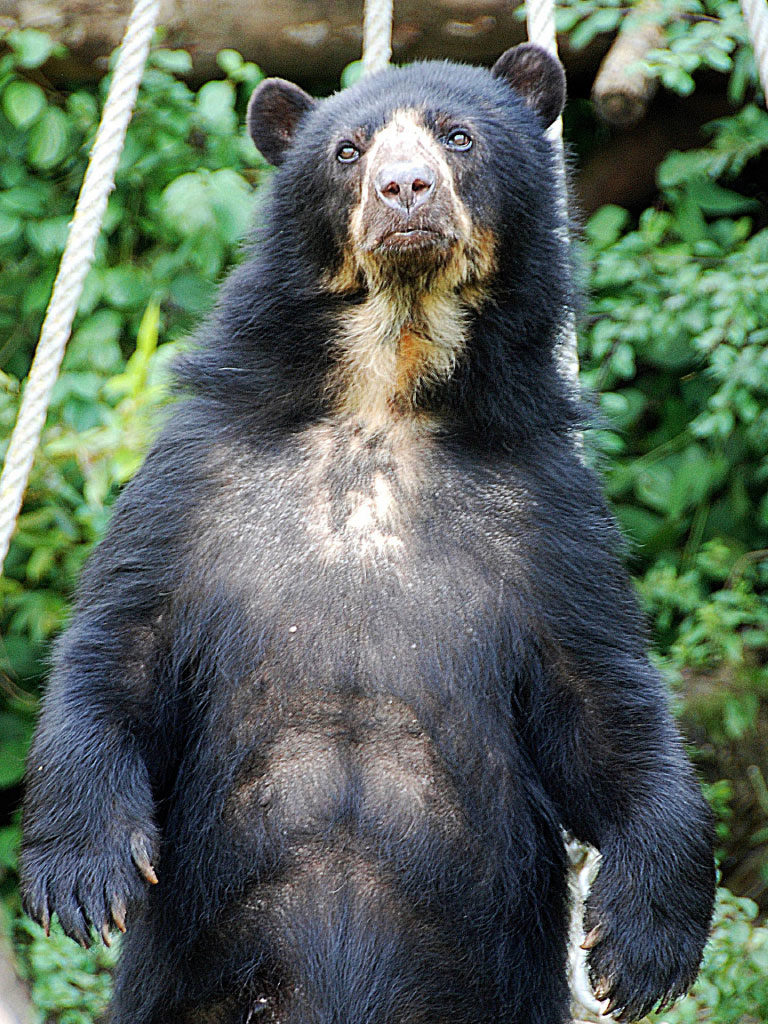 The spectacled bear’s coat is shaggy and dense. It is either black or dark brown in color, sometimes with a reddish tint. The snout is comparatively short and broad.

Strong jaws and flat molars enable the spectacled bear to crush and grind even very tough and fibrous plant matter. 95% of the species’ diet is comprised of vegetation.

Male spectacled bears are 30% to 50% larger than females. 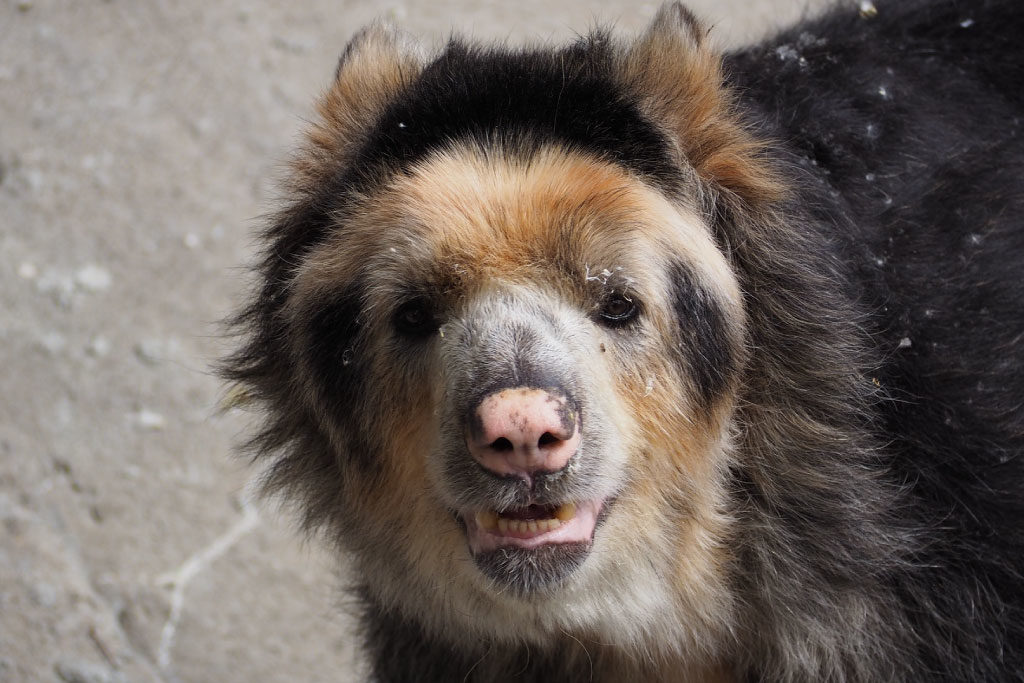 The spectacled bear is endemic to (i.e. ‘only found in’) the Andes, a mountain range in South America. The area occupied by the species is long and narrow. It follows the Andean mountains from western Venezuela to northwestern Argentina, and includes Colombia, Ecuador, Peru and Bolivia.

Spectacled bears are also occasionally encountered in Panama. However, there is no established population in the country.

However, the spectacled bear is highly adaptable. The species is also present in a variety of other habitats, ranging from tropical lowland and dry forests through to tropical high-altitude grasslands and shrublands. The bear is thought to migrate between different habitats according to seasonal changes in food abundance.

The spectacled bear is a shy and highly elusive animal. It is solitary but not strongly territorial. Where food is abundant a number of bears may come together to feed.

In general, the spectacled bear is active during the day. However, its activity pattern can vary both from region to region and from season to season.

There is no seasonal shortage of food within the spectacled bear’s range. As a result, unlike other species of bear, it does not hibernate.

The spectacled bear does not have a strict mating season. Most pairings appear to take place between April and June, with mated pairs staying together for 1 to 2 weeks.

The spectacled bear’s gestation period is between 5.5 and 8.5 months. The female gives birth in a den that is hidden under tree roots or rocks. Most births take place between December and February.

A typical litter consists of 2 cubs, but can range from 1 to 4 cubs. Litter size depends both on the availability of food and the mother’s size and condition.

Newborn spectacled bear cubs weigh about 300 to 330 g (11 to 12 oz.) and are born blind. The fur is black and the species’ characteristic facial markings are already present.

The eyes open when the cubs are around 30 to 40 days old. The cubs begin to explore their surroundings at around 3 months of age, often hitching a ride on their mother’s back. The cubs stay with their mother for up to one year.

What Do Spectacled Bears Eat?

Bromeliad fruits, cacti, palm nuts and bamboo hearts are a mainstay in the animal’s diet. The bear will also feed on berries, orchid bulbs, unopened palm leaves, tree bark, honey and cultivated plants such as corn and sugarcane.

Occasionally, the spectacled bear will feed on carrion, or prey on insects and small rodents, birds and livestock.

An adult spectacled bear has no natural predators. The cubs are vulnerable to cougars (Puma concolor) and jaguars (Panthera onca). Adult male spectacled bears may also attack the cubs of another male.

Is The Spectacled Bear Endangered?

The spectacled bear is rated ‘Vulnerable’ by the IUCN.

The global population of spectacled bears is estimated to be fewer than 10,000 mature adults. A decline of over 30% is predicted to occur over the next 30 years across the bear’s range.

The main threats to the spectacled bear include: