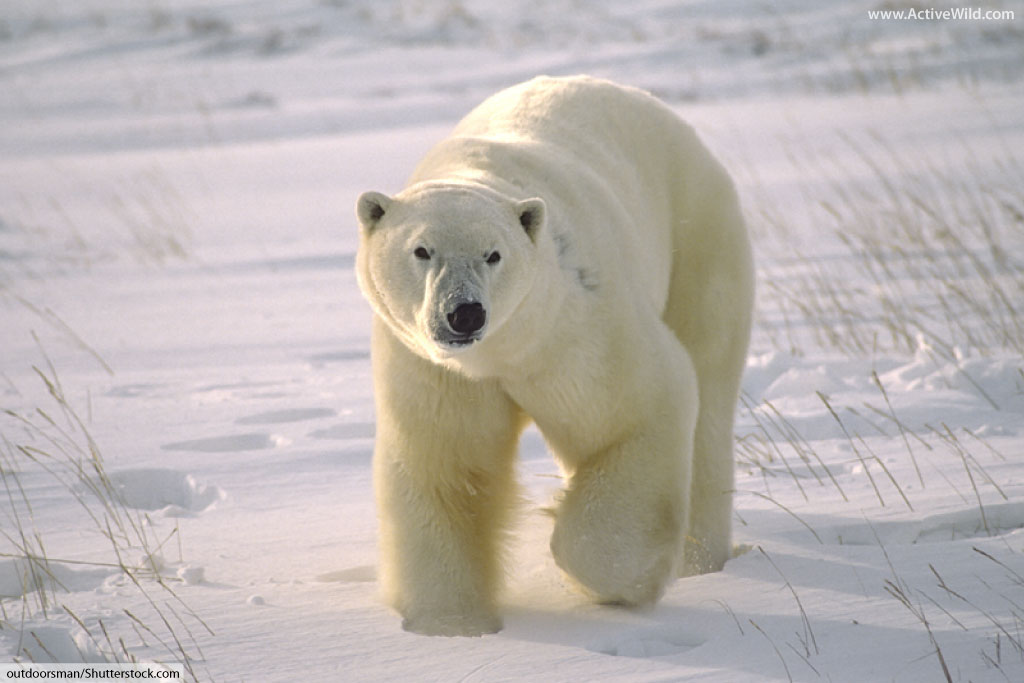 Polar bear facts, pictures, video and in-depth information. The polar bear is the largest and most carnivorous of all bears. This distinctive all-white bear inhabits the Arctic sea ice, where it preys primarily on seals.

Despite its size and power, the polar bear is rated ‘Vulnerable’. This is largely due to a reduction in the area covered by the Arctic sea ice. Polar bears rely on the sea ice for hunting. When it melts they are unable to eat.

On this page you’ll become a polar bear expert as you explore the species’ amazing adaptations, behavior and life cycle.

Polar Bear Facts At A Glance

The polar bear’s scientific name is Ursus maritimus, which means sea bear. Polar bears are the only bear species considered to be a marine mammal. Polar bears spend most of their time in or around water. They are excellent swimmers and divers.

One polar bear, which was fitted with a radio collar, was tracked swimming 687 km (427 miles) in a single journey. The bear was at sea for 9 days (sadly during the journey she lost her cub.)

A polar bear can swim underwater for up to 3 minutes.

The polar bear’s closest living relative is the brown bear. There is some overlap in the range of the two species. They occasionally mate, creating brown bear / polar bear hybrids.

A polar bear’s body has a number of adaptations for living in cold Arctic conditions.

A polar bear’s fur is the thickest of all bears. The coat is made up of a dense undercoat and a top layer of longer guard hair. This dual-layered coat provides waterproofing, insulation and protection.

Underneath its fur, a polar bear’s skin is black. This helps it to absorb heat. A thick layer of fat under the skin provides insulation and buoyancy.

A polar bear has extremely large paws. Reaching up to 12 in (31 cm) in width, they help to spread the bear’s weight when it is walking over deep snow or on thin ice. They also provide propulsion when the bear is swimming.

The pads of a polar bear’s paws are hairy and covered in small bumps to prevent the bear from slipping.

Like all bears, a polar bear has an acute sense of smell. It can sniff out a seal buried 1m (3ft) in the snow from 1.6 km (1 mile) away)! The polar bear’s sense of smell is more developed than its hearing and sight, both of which are similar to those of a human.

How Big Is A Polar Bear?

The Kodiak bear, a subspecies of brown bear, occasionally reaches sizes similar to (possibly even larger than) that of a polar bear. However, on average the polar bear is larger.

There is a large difference in size between male and female polar bears, with males often being twice the size of females.

Significant differences in the characteristics of males and females of the same species is known as sexual dimorphism. Polar bears are among the most sexually dimorphic of all mammals; only some pinnipeds (animals such as seals and walruses) exhibit greater sexual dimorphism.

Where Do Polar Bears Live?

Polar bears Polar bears inhabit the ice-covered water of the Arctic, together with the surrounding land and islands. They live further north than any other type of bear. In fact, polar bears have been spotted just 25km (15.5 miles) away from the North Pole!

The furthest south polar bears are known to venture is the coast of Newfoundland, Canada.

The countries in which polar bears are found are: the United Sates (Alaska), Canada, Greenland, Norway, and Russia.

Are There Polar Bears In Alaska?

Yes, there are polar bears in Alaska, as the video below shows! You can find out about polar bears and other Alaskan wildlife here.

Unlike other bears, the polar bear is almost entirely carnivorous. Seals make up the majority of its diet. Other animals, including birds, fish and crustaceans, are also taken, as is carrion.

Occasionally male polar bears will prey on large species such as walruses, narwhals and beluga whales.

What Seals Do Polar Bears Eat?

The seal species most commonly hunted by the polar bear is the ringed seal, followed by the bearded seal. Harp seals and hooded seals are also taken.

Away from the water, the polar bear will occasionally prey on muskoxen and reindeer. Polar bears will also raid garbage tips.

The polar bear does eat some plant matter, including berries and kelp.

The hunting technique most often used by the polar bear is known as ‘still hunting‘.

First, the polar bear will use its acute sense of smell to locate a seal breathing hole . It will then lie in wait for a seal to appear. Bears have been known to wait at the same hole for several hours.

When a seal appears, the bear uses its sharp claws to pull its prey out of the water and onto the ice. The bear will dispatch its prey with a bite to the head.

Polar bears will also stalk and pounce on seals, and dig out infant seals buried in their lairs beneath the snow.

Polar bears often travel large distances in order to find food. Bears that live in areas in which the sea ice melts for part of the year will not not be able to hunt during this time. These bears will live off of their own fat reserves until the ice reappears.

How Fast Can A Polar Bear Run?

Polar bears do not hibernate and are active all year round. In the autumn, pregnant females construct a snow den. They retreat to the den for three months in order to give birth and raise their cubs. In preparation for denning, a female may double her body weight.

A denning female will enter a dormant state, but will not hibernate.

Polar bears are solitary, nomadic animals. They only come together in order to mate. Mating takes place on the ice during April and May. During this time a male bear, using its acute sense of smell, will seek out a female up to 100 km (60 miles) away.

Often, several males will track the same female. This will result in ferocious fights between the males in order to determine the dominant bear, who will then mate with the female.

Mated couples will stay with one another for around a week. After this time, the male will depart. He will play no further part in the rearing of the young.

The cubs are nursed on their mother’s fat-rich milk. By the time they emerge in late March they will weigh around 10 to 15 kilograms (22 to 33 lb.).

The cubs will stay with their mother for two to two and a half years. During this time she will protect them ferociously.

Polar bears are currently classified as being ‘vulnerable‘. Although not immediately endangered, polar bears are still in trouble.

How Many Polar Bears Are Alive?

Why are polar bears endangered?

The biggest threat to polar bears is climate change. The warmer the Earth becomes, the more sea ice melts. Polar bears are reliant on the ice to hunt seals.

If you want to learn about some more amazing animals, check out our Arctic Animals list.