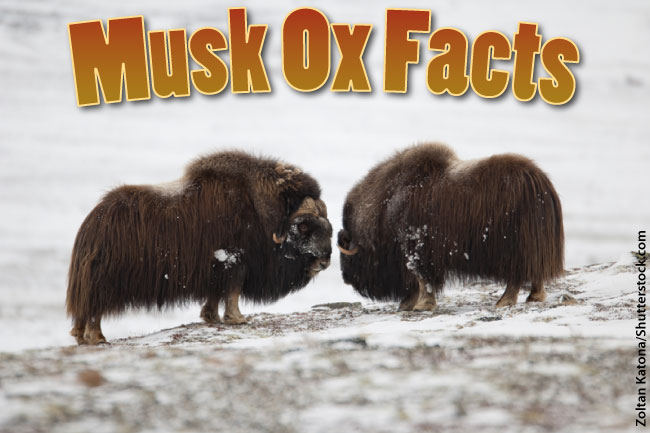 In this article we’ll be learning about the Musk Ox, a large herbivore with many adaptations for living in the cold Arctic region. This page is part of our Arctic Animals series. Read on for incredible Musk Ox facts …

(Be sure to watch the incredible video of Musk Oxen fighting!)

Stocky, intimidating, and a force to be reckoned with. The Musk Ox is not your average herbivore (plant eater). So what makes these Arctic animals quite so unique?

The Musk Ox is also called a ‘Muskox’.

The Musk Ox has the scientific name Ovibos moschatus. It is a member of the Artiodactyl, or even toed ungulates (this group also includes animals such as pigs and hippopotamuses).

Although the Musk Ox is part of the Bovidae family, it is surprisingly it is more closely related to sheep and goats than to cattle. It is part of the Caprinae subfamily.

Male Musk Oxen release a strong odour in their urine during the breeding season, which is how they get their name. As quite a lot of it gets sprayed onto their coat when they urinate, it makes them rather smelly!

The Musk Ox is a formidable beast. Standing up to 5ft (1.52 meters) at the shoulder they can weigh as much as 800lb (363kg). While males are larger than females, both sexes have distinctive curled horns on their foreheads.

Females have hair in between the horns. Males have horns which are joined together to protect them during sparring matches with rival males.

Brown in colour, the Musk Ox’s coat can reach nearly to the ground but is shorter around the face and legs.

Where Do Musk Ox Live?

The Musk Ox is found in the Arctic tundra, with 75% of the population found in Canada. Smaller populations also exist in Norway, Siberia, Sweden and Greenland.

Musk-oxen have a short migration range, moving from lowland areas in the summer to more elevated regions in the winter. This helps them avoid deep snow.

In the Arctic regions that the Musk Ox calls home, the temperature can drop as low as -94°F (-70°C). The Musk Ox has evolved several adaptations to help them survive the cold.

Protection starts with their amazing coat, the outside of which can reach 100cm (40 in.) in length. Underneath the waterproof outer layer is the undercoat, or qiviut, which provides insulation and is much prized by hunters.

In the summer, the Musk Ox loses this undercoat to prevent itself from over-heating.

The Musk Ox’s stocky frame reduces the surface area to volume ratio. This reduces heat loss as less of the animal is exposed to the cold outside temperatures. This is helped by their short legs and small ears.

High levels of body fat work in much the same way as blubber on marine mammals, providing internal organs with additional insulation against the cold.

Two weight-bearing toes on each foot give the Musk Ox better grip and stability over rough ground. They are not built for regular running, although they can reach speeds of up to 25mph (40 km/h) if threatened.

Like most ungulates (hoofed animals), Musk Oxs are born precocial (fully formed), and can be up on their feet within 45 minutes. This is essential if they are to have any chance against predators and to be able to keep up with the herd. Musk Oxen calves drink their mother’s milk for 2 months.

Musk Ox are herd animals. They live in groups that number as few as 5 in the summer to as many as 60 in the winter when conditions get tough.

Musk Oxen live in a harem system, with a dominant male mating with the females in his herd. Competition between males for the dominant position is tough. Competitors will challenge one another with intimidating posturing, head swinging and mock charges.

If neither animal backs down, a fight will occur. This involves the males charging and head butting each other, although this rarely ends in a fatality.

You can see the incredible power of these animals in the film below.

Females are pregnant for around 8 months before giving birth to a fully-formed calf.

Within the herd, a dominant female takes the lead and asserts her authority over younger females by pushing and shoving against them. There is a strict herd hierarchy. The more dominant animals have better feeding opportunities.

Few predators – with the exception of grey wolves – will take on an adult musk ox, and even then it’s with care. Weak Musk Ox are more at risk from predation, as are calves.

Musk Oxen demonstrate a unique defence mechanism when attacked. They work together using cooperative behaviour to protect the young. By forming a ring (known as ‘circling the wagon’) they place the vulnerable infants at the centre while facing the threat horns outwards. It takes a daring predator to try and get through this barrier.

The Musk Ox is a herbivore, travelling up to 2km a day to feed on a variety of grasses. In the winter when grass quality drops, it lives off its fat reserves while also switching to lichens, mosses and roots.

By moving to a higher altitude where the snow is thinner, the Musk Ox is still able to dig under the snow to forage.

Being a ruminant, the Musk Ox has a four-chambered stomach to help break down the tough fibrous content of its plant-based diet. After eating, food is later regurgitated and re-chewed as ‘cud’. This breaks it down even further to help the Musk Ox extract the maximum nutrients.

Is The Musk Ox Endangered?

Currently the Musk Ox is listed as ‘Least Concern’ with the IUCN, although it has been quite a different story in the past. Now with a stable worldwide population of around 150,000, the Musk Ox had previously been hunted to extinction in some areas. Their current status is a result of extensive re-introduction programmes.

The Arctic region is full of some amazing animals, and the Musk Ox is no exception. Although we’re not quite sure we’d want to meet these smelly animals in the breeding season!