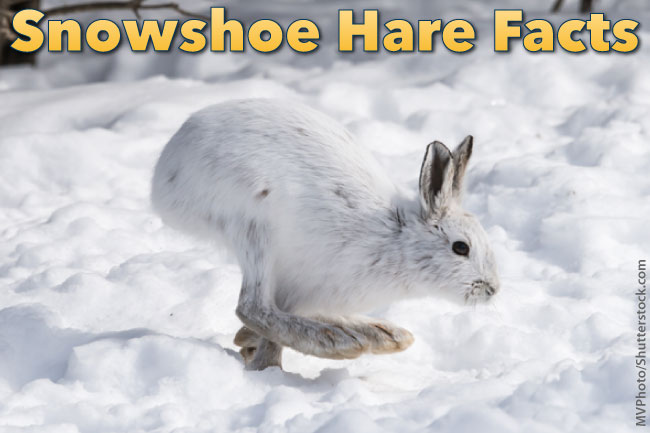 This page contains Snowshoe Hare facts, and is part of our Arctic Animals series. This cold-weather specialist has a number of adaptations that allow it to live in the frozen north. Let’s learn more about this speedy survivor …

The Snowshoe Hare (Lepus Americanus) is a forest dwelling hare found in the Boreal and Coniferous forests of North America. Its range extends from the shores of the Arctic Ocean south through the higher elevations of the Rocky, Appalachian, and Cascade Mountain ranges.

Hares (and jackrabbits) are animals belonging to the genus Lepus. They are in the Leporidae family, which includes all rabbits and hares.

Snowshoe Hares are larger than most species of rabbits and hares. Compared to other hares, Snowshoe Hares have longer hind legs, smaller ears, and large, furry feet.

The Snowshoe Hare’s large, furry feet act like snowshoes, allowing the animal to move on the top of deep snow. This is how the hare got its name. (It is also sometimes known as a ‘Snowshoe Rabbit’.)

As we’ll see, other adaptations for life in the cold north include a coat that changes color seasonally.

Like all hares, Snowshoe Hares are fast, nimble animals. They can jump as far as 3 meters (10 ft) in a single bound and run at bursts of 45 km per hour (28 mph).

Snowshoe hares are an important source of food for many predators. However, the hares’ high speed and acceleration mean that they’re not an easy meal!

Snowshoe Hares are covered in thick, layered fur that changes color with the seasons for camouflage. The Snowshoe Hare is also called a “Varying Hare” because its color varies depending on the season.

During the winter, Snowshoe Hares are snow-white, with black tips on their ears. During the spring thaw, it takes the hares ten weeks to change from white to brown.

The black tips on their ears remain all year around.

Snowshoe Hares are mainly nocturnal. They use systems of trails in the undergrowth of the forest to look for food.

The video below shows how well camouflaged the Arctic Hare is in the winter:

What Do Snowshoe Hares Eat?

Snowshoe Hares feed at night on barks, shrubs, grasses, and plants and require 300 grams (10.5 oz) of food a day.

They use the trail systems to quickly and nimbly escape from predators.

During the day, Snowshoe Hares are mainly sedentary (sitting and not moving very far). They hide and rest in the underbrush or in shallow holes in the ground called forms.

Snowshoe Hare Life In The Wild

The average lifespan of a Snowshoe Hare is one year or less, but these hares are prolific breeders.

The Snowshoe Hare breeding begins in late winter and lasts into mid-summer. The timing of the breeding season varies depending on location. Snowshoe Hares do not hibernate.

Most female Snowshoe Hares have 3-4 litters per year. The average litter is between 3 and 5 leverets, but can be as large as 8.

Males fight for access to females during the breeding season and females may breed with 2-3 males per season.

The gestation period (the time it takes to develop before being born) for hares is 35-40 days. Female Snowshoe Hares can be pregnant with the next litter before the first litter is born.

Young hares are called “leverets” and are independent of their mother within 30 days of being born. Leverets are ‘precocial’ (able to fend for themselves shortly after being born), and are born able to see and to move around.

At peak times within Snowshoe Hare populations there can be as many as 500-600 hares per square kilometer. Populations fluctuate in 10 year cycles depending on disease, food supply, and predators.

When the Snowshoe Hare population drops it directly impacts the predators that depend on them for food, especially lynx.

Snowshoe Hares communicate with each other using a variety of behaviors. Hares might thump their hind feet to warn others of danger. During the mating season, hares may hiss, grunt, snort, or growl to communicate with their mate.

If frightened or injured, hares make screaming or screeching noises.

The Snowshoe Hare has many predators, and is a good source of food for most small and mid-sized predators within the same habitat. Lynx, bobcats, fishers, foxes, coyotes, mountain lions, owls, hawks, black bears and wolves will all happily capture and eat a snowshoe hare.

Snowshoe Hare populations throughout North America are strong and are neither endangered nor threatened.

We hope that you have enjoyed learning about the Snowshoe Hare. You can find out all about its close cousin, the Arctic Hare, here: Arctic Hare Facts.