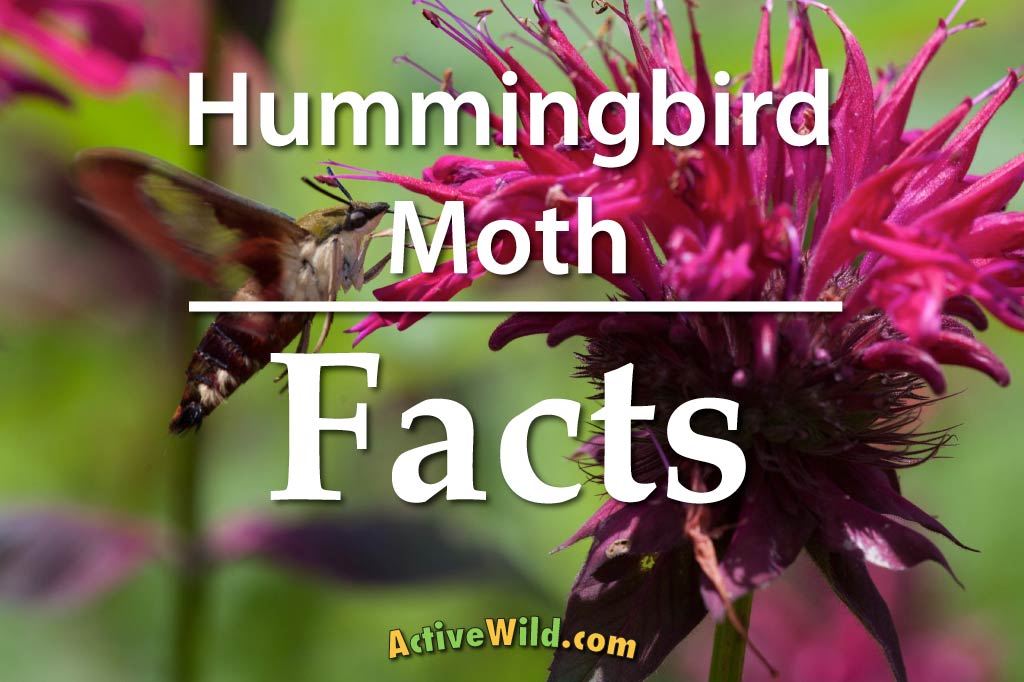 As they dart from flower to flower in search of nectar, not only do hummingbird moths look like the birds after which they are named, but they also sound like them; the rapid flapping of their wings makes a hummingbird–like buzz.

What Is A Hummingbird Moth?

Most of the moths known as ‘hummingbird moths’ are members of the genus Hemaris in the sphinx moth family, Sphingidae.

Other sphinx moths commonly known as hummingbird moths, but not of genus Hemaris, include the white-lined sphinx moth, and the hummingbird hawk moth.

Hummingbird moths have barrel-shaped bodies, long wings and long proboscises (long, hollow mouthparts used to drink nectar). Unlike most moths, hummingbird moths are usually active during the day, when they can be seen darting from flower to flower in their search for nectar.

The insects’ appearance, flying style and nectar-gathering behavior means that they are often mistaken for hummingbirds, hence the name ‘hummingbird moth’.

Hummingbird moths of genus Hemaris are also known as clearwing moths on behalf of their transparent wings. Although the wings of clearwing moths are initially covered in scales like those of other moths, after the first few flights the scales fall off, leaving the wing panels transparent.

Which Hummingbird Moth Species Are Found In North America?

In Europe, moths of genus Hemaris are more commonly known as bee hawk-moths. There are three species present in Europe.

The hummingbird hawk-moth (Macroglossum stellatarum), a moth found in Europe, Africa and Asia, is not a member of the genus Hemaris, although it is in the sphinx moth family.

Hummingbird moths have thick, bumblebee-like bodies and long wings. At the end of the abdomen is a tail-like tuft or fan of short, stiff bristles.

The coloration of hummingbird moths varies from species to species; common colors include olive green, rusty reddish brown and yellow. The colors on the animal’s back and underside are often different. Many hummingbird moths have horizontal bands or other markings on the body.

Hummingbird moths have a pair of long, club-like antennae that usually widen towards the end. The proboscis is around twice the length of the body and is kept tightly coiled when not in use.

Hummingbird moth larvae (caterpillars) are among several types of sphinx moth caterpillar known as hornworms due to the horn-like spike that projects from the rear the body.

Hummingbird moth caterpillars should not be confused with the plant-damaging tomato hornworm or tobacco hornworm, which are the larval forms of the five-spotted hawkmoth and tobacco hawk moth respectively.

The eggs of hummingbird moths are tiny, round, and glossy pale green in color. The cocoons of most species have a glossy surface.

Hummingbird moths occur in a wide variety of habitats, but are most commonly found in meadows, cultivated gardens and suburban areas.

Unlike most moths, hummingbird moths tend to be most active either during the daylight hours or around dusk. June and August are often peak months for activity.

Hummingbird moths are agile fliers; they are able to hover in the air in one spot as well as fly backwards and sideways. Their rapid wing movements make a humming sound much like that made by hummingbirds.

Like all butterflies and moths, a hummingbird moth goes through four developmental stages during its life: egg, larva, pupa and imago (adult).

Hummingbird moths breed during the summer. The female produces pheromones to attract a male, and after mating, she finds a suitable host plant on which to lay her eggs. The eggs are usually deposited on the underside of a leaf.

After hatching, the caterpillars feed until they reach their full size (usually within a couple of weeks). They then make their way to the ground where they pupate, forming a cocoon under leaf litter or buried in the soil.

In colder areas, a single generation is produced each year; in warmer areas, two or three generations may be produced in a year.

Depending on the species, an adult hummingbird moth may live as long as seven months or as little as three weeks.

What Do Hummingbird Moths Eat?

The moths are particularly attracted to plants in the honeysuckle family, including viburnum and snowberry. They also feed on the nectar of flowers such as horse mint, beebalm, phlox, verbena, dogbane, cardinal, red valerian, salvia, and buddleia (butterfly bush).

The caterpillars eat leaves and are more restricted in their choice of diet than the adult moths. The primary host plants are hawthorns, cherries, honeysuckles, snowberries, teasels and dogbane.

None of the hummingbird moth species have been listed by the IUCN as endangered. However, some species may be in decline locally. For example, the slender clearwing (H. Gracilis) is considered threatened in Connecticut.

The species typically has an olive green head and thorax, burgundy abdomen, and pale undersides, although colors vary between individuals.

The hummingbird clearwing can be differentiated from the snowberry clearwing by its pale yellow legs, and by the lack of banding on the side of the thorax.

The gold / black coloration of the snowberry clearwing means that it can easily be mistaken for a bumblebee.

The species if most abundant in the Eastern United States and the southeast of Canada, although it has been seen both in California and Alberta, Canada.

The snowberry clearwing can be distinguished from the hummingbird clearwing by the black stripe that stretches from the insect’s head, across the eye and under the wings on the thorax, and by its black legs.

The slender clearwing is very similar to the hummingbird clearwing, having an olive head and thorax and burgundy abdomen.

The slender clearwing can be identified by the thin white band around the abdomen where it meets the thorax; the red-brown stripe running along the side of the thorax from behind the eye and under the wings to the abdomen; and the red-brown color of the upper surface of its legs.

The species is mainly found in the eastern United States.

As its name suggests, the Rocky Mountain clearwing is found in the western United States. Its range stretches from southwest Canada to northwest Mexico.

The species’ coloration is varied, but typically the head and thorax are olive-green and the abdomen is black with one or more adjacent yellow / gold segments.

With a wingspan of between 2 and 3 inches, the adult white-lined sphinx is larger than the hummingbird moths of genus Hemaris found in the United States. It is also more likely to be seen flying at dusk and during the night than the day-flying clearwings.

In the video below, a white-line sphinx moth can be seen flying from flower to flower in search of nectar.

The species’ long forewings are dark brown and black, with a white central stripe and several thinner cross-stripes. The hindwings are black with a wide pink central stripe. The abdomen is marked with several white and black stripes.

The white-lined sphinx is found throughout the United States as well as in southern Canada and Central America.

The hummingbird hawk-moth is a sphinx moth found in Europe, Asia, and Africa. It is similar in appearance to hummingbird moths (although it does not have clear wings), but is not in the genus Hemaris.

In the UK the hummingbird hawk moth is seen from late spring to early autumn. It has orange-brown wings, grey head and thorax, and black abdomen with white patches. The undersides of the head and thorax are white / grey. The wingspan ranges from 50 to 58 mm.

40 thoughts on “Hummingbird Moth Facts: Discover The Amazing Moths That Look (And Sound) Like Hummingbirds!”