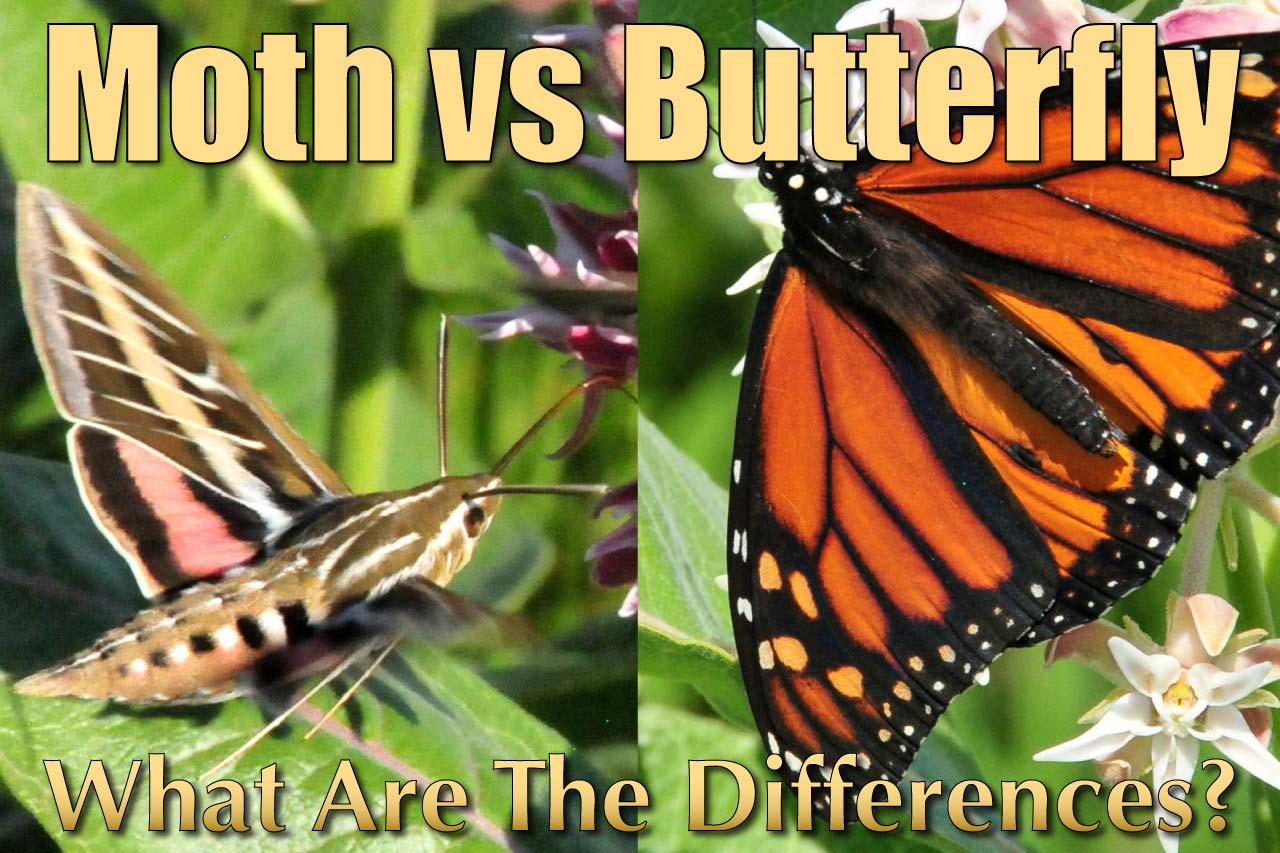 On this page we’ll provide answers to these questions, and we’ll also discover some surprising facts about the evolution of moths and butterflies…

What Is The Difference Between Moth And Butterfly?

The main behavioral difference between moths and butterflies is that nearly all butterflies are diurnal (active during the day), whereas most moths are nocturnal.

In addition, there are a number of physical characteristics that can be used to differentiate between moths and butterflies.

The way in which moths and butterflies hold their wings when at rest can also be used to tell the difference between butterflies and moths.

Other differences between moths and butterflies include…

The above ‘rules’ can be used as a quick guide to telling moths and butterflies apart, but note, there are many exceptions!

To fully understand the difference between moth and butterfly we need to delve a little deeper into the evolution of both groups of insect.

Surprisingly, moths first appeared many millions of years before butterflies, and butterflies evolved from moths.

Moths and butterflies make up the order Lepidoptera. (An order is a group of related animals. You can find out more about how animals are grouped on this page: Animal Classification.)

Lepidoptera means ‘scale wing’. The name refers to the many tiny scales which cover both the wings and the bodies of butterflies and moths.

Like all insects, the bodies of moths and butterflies are divided into three segments: head, thorax and abdomen. All members of Lepidoptera go through a four-stage life-cycle, which consists of: egg, larva (caterpillar), pupa (chrysalis) and imago (the adult moth or butterfly).

Butterflies make up their own group, Papilionoidea, within Lepidoptera*. Papilionoidea is a ‘superfamily’ that contains several butterfly families, including Papilionidae (swallowtails and birdwings) and Nymphalidae (the brush-footed butterflies).

* There is some debate over whether or not the moth-like Hedyloidea should be included within Papilionoidea.

How Many Moths and Butterflies Are There?

There are around 180,000 known species* in Lepidoptera. Only around 10% of these are butterflies; the remaining 90% are moths.

Most of the world’s moths and butterflies are found in tropical regions, although lepidopterans are present on every continent except Antarctica.

Together, butterflies and moths make up around 1% of all known organisms.

The Evolution of Moths and Butterflies

Whereas moths have been around since the dinosaurs, butterflies are relative newcomers, only having appeared in the last 55 million years.

Moths appeared many millions of years before butterflies. The very first moths appeared during the Jurassic Period. These early lepidopterans would have co-existed with dinosaurs.

The earliest known moth is Archaeolepis mane. A fossilized specimen has been dated to the Early Jurassic Period, around 190 million years ago.

The insects helped the plants to reproduce by transferring pollen, while the plants provided the insects with food in the form of nectar.

During the Cretaceous Period proboscises began to appear in adult lepidopterans. A proboscis is a curled, tongue-like mouthpart used by moths and butterflies to extract nectar from flowers. It is a feature of most modern butterflies and moths.

(The earliest-known American butterfly is Prodryas Persephone, whose fossilized remains have been dated to 34 million years ago.)

Butterflies evolved from moths. Because several different groups of moths had already appeared before butterflies, some moths are more closely related to butterflies than they are to moths in other groups.

You can find out more about moths, butterflies and other types of insect on the following pages: