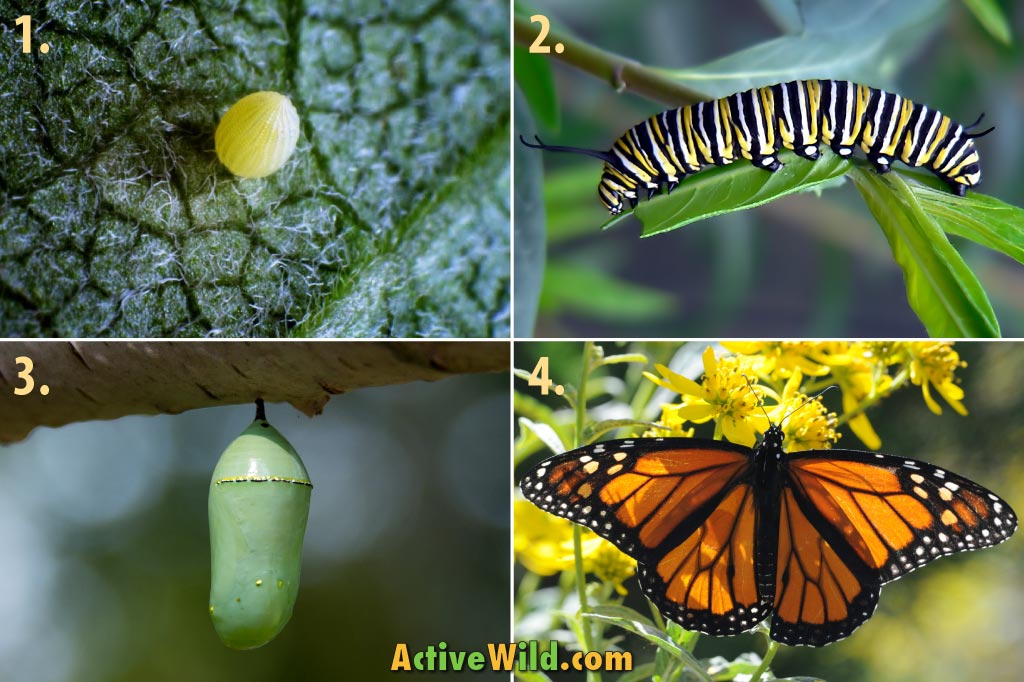 The Life Cycle Of The Monarch Butterfly

The monarch butterfly is one of the best-known butterfly species of North America. With its black-veined, orange-paneled wings, this large insect is a familiar sight across the United States, southern Canada and Mexico.

What makes the monarch butterfly particularly interesting is that it combines the usual four-stage butterfly life cycle with one of the longest migrations of the insect world. Individual monarch butterflies are known to travel thousands of miles in their fall migration.

As with all butterflies, there are four main stages in the monarch butterfly life cycle:

(You can click on any of the stages below to go to the relevant part of the page.)

In order to fully understand the life cycle of the monarch butterfly, we first need to take a look at the insect’s migratory pattern.

The monarch migration begins in mid-August, when monarch butterflies living in Canada and the United States begin to migrate south to the southern United States and Mexico, where the species overwinters.

During the species’ annual migration south, individual butterflies are known to travel up to 3,000 miles from Canada to Mexico.

Millions of monarch butterflies take part in the migration, making it one of the world’s most impressive natural spectacles.

The return migration takes place in spring, usually beginning in March. Unlike the journey south, the northward trip is taken in stages, with no single butterfly making the entire journey.

Instead, the journey is split between multiple generations.

It may be the great-grandchildren of a monarch butterfly that hatched in Mexico that finally return to the northernmost regions of the butterfly’s range.

As with all butterflies, there are four main stages in the monarch butterfly’s life cycle: egg; larva (caterpillar); pupa (chrysalis); imago (adult butterfly). We’ll find out more about each of the stages below:

Female monarch butterflies each lay around 300 to 1,000 eggs. The eggs are laid individually on the undersides of the leaves of milkweed plants. They are oval-shaped, around 1mm in height, and white / pale cream in color.

Monarch butterfly eggs take from 3 to 5 days to hatch.

The larval stage of a butterfly is known as a caterpillar.

Monarch caterpillars only eat milkweed, which is why it is important that these plants, which are often treated as weeds, are planted and conserved.

Milkweed leaves aren’t only important as a food source; they also contain chemicals known as cardenolides which make the caterpillar distasteful to predators.

These toxic chemicals stay in the monarch’s body even in its adult form. The butterfly’s bright orange color warns potential predators of its toxicity.

As well as its six true legs, the monarch caterpillar has five pairs of ‘false’ legs, known as ‘prolegs’. These are equipped with tiny hooks for holding onto surfaces. The tentacles at either end of the caterpillar’s body are sense organs.

The monarch caterpillar sheds its skin (a process known as a molt, or moult in British English) five times. At the fifth molt the insect enters its pupal stage. The stages between molts are known as an ‘instars’. The first instar is the newly-hatched caterpillar, the second instar is the caterpillar after its first molt, and so on.

Each successive instar is larger than the previous instar and slightly different in appearance. By the fifth and final instar the monarch caterpillar is between 1 and 1.8 in. (2.5 and 4.5 cm) in length.

You can find out more about these stages (and see pictures of caterpillars in each stage) on this page: Monarch Caterpillar Stages

The larval stage of the monarch butterfly life cycle takes from 10 to 14 days.

The pupal stage of a butterfly is known as a chrysalis.

When ready to pupate, the monarch caterpillar attaches itself to the underside of a leaf or other surface with a sticky silk pad. It hangs upside-down and sheds its yellow and black skin, revealing the leaf-green protective shell of the chrysalis underneath.

The chrysalis’s green color provides camouflage against the foliage. Prior to hatching, the chrysalis becomes transparent, allowing the adult butterfly’s colors to be seen.

As the monarch butterfly metamorphoses into its adult form, the chrysalis can be seen to make slight movements.

The pupal stage of the life cycle of the monarch butterfly lasts from 10 to 14 days.

The transparent chrysalis splits open and the adult butterfly finally emerges. After hatching the butterfly has to wait for its wings to dry out and become fully extended before it can fly away in search of nectar.

Although the adult butterfly does not do any more growing, it still has to feed in order to acquire energy.

Unlike the caterpillars, which feed only on milkweeds, the adult monarchs feed on a variety of nectar-producing plants.

Unless a member of the south-migrating generation, a monarch butterfly takes from 4 to 5 days to reach sexual maturity and lives in its adult form for between 2 and 5 weeks.

Members of the southward-migrating generation of monarch butterflies have a much longer total lifespan of 8 to 9 months, and will not start mating until spring.

Before mating, males pursue females in the air. Mating takes place on the ground, with male and female butterflies remaining attached to one another for between 30 minutes to an hour.

Both males and females will mate several times with different partners. Egg-laying takes place shortly after mating has occurred.

At this point the life cycle of the monarch butterfly is complete.

You can find out more about monarch butterflies on this page: Monarch Butterfly Facts