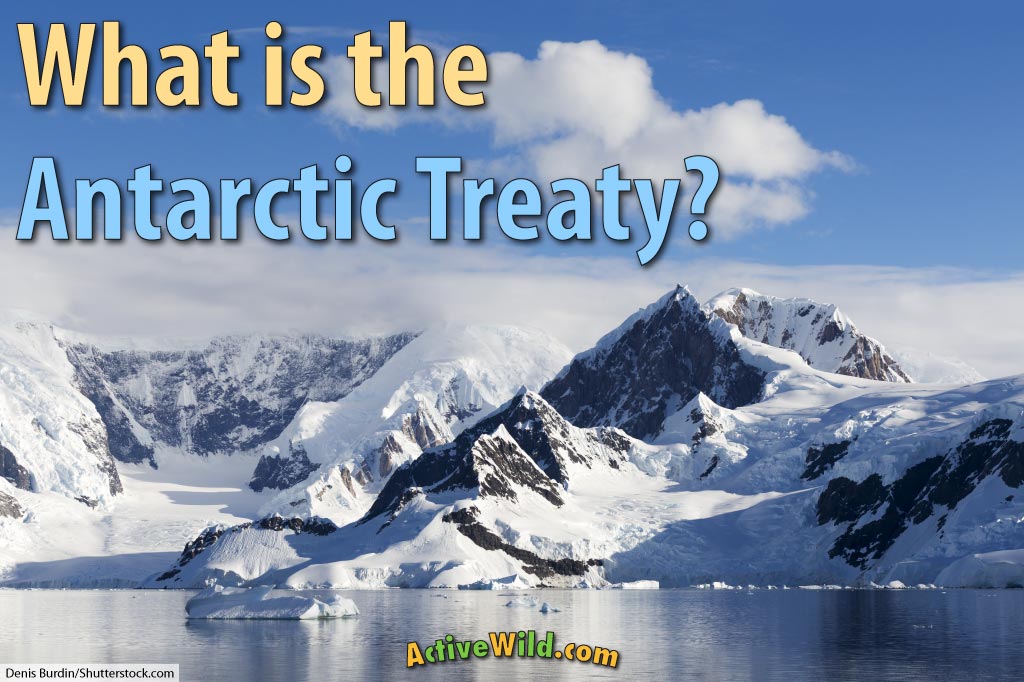 Antarctica is the world’s southernmost continent; an icy, relatively untouched wilderness inhabited mainly by penguins and seals. This remote land is a place of both great natural beauty and scientific importance.

The Antarctic Treaty – an agreement made between many of the world’s most powerful nations – ensures that Antarctica is likely to stay this way for future generations.

On this page we explain what the Antarctic Treaty is, and why it’s so important…

What Is The Antarctic Treaty?

The Antarctic Treaty is an agreement signed by 54 countries stating that the continent of Antarctica should only be used for peaceful, scientific purposes. The treaty prohibits military activity, weapons testing and nuclear explosions on the continent, and encourages cooperative scientific research between nations.

Since then a further 42 countries have signed the treaty, meaning that today (mid 2019), a total of 54 countries are committed to preserving Antarctica’s status as place for peace and collaborative scientific research.

Countries That Have Signed The Antarctic Treaty

Original Signatories to the Antarctic Treaty:

Antarctica is a continent located at the southernmost part of the world. It is surrounded by the Southern Ocean, whose treacherous waters meant that early expeditions in the region were fraught with danger. With no native population of its own, Antarctica was the last continent to be discovered by man.

Captain Cook, the famous British explorer, came close to Antarctica during his 1772 voyage to find the fabled southern land known as ‘Terra Australis’.

However, it wasn’t until 1820 that Antarctica was first seen by man. In this year the continent was discovered independently by three men: Fabian Gottlieb von Bellingshausen (a Russian naval captain), Edward Bransfield (a British naval captain), and Nathaniel Palmer (an American sealer).

Surprisingly, Antarctica is also the world’s driest continent. It has a similar level of precipitation to many hot deserts, and is classed as a ‘polar desert’.

The South Pole – the southernmost point of Earth – lies on Antarctica. Here, at 90°S, you face north whichever way you turn.

Antarctica doesn’t have a permanent population. During the summer, around 4,800 people, most of whom are scientists, work on the continent. During the winter, this number shrinks to around 1,100.

History of the Antarctic Treaty

Prior to the signing of the Antarctic Treaty, a total of nine countries had made territorial claims on Antarctica. Not all of these claims were (or are) recognized by the other countries involved, and the claims of some countries even overlap those of others.

This naturally caused tension between the countries involved; tension which would have been detrimental to scientific research.

A period of joint scientific research between countries – known as the International Geophysical Year (IGY) – took place from July 1st 1957 to December 31st 1958. This led to several research bases being established on Antarctica.

Following the success of the IGY, the nine countries with claims on Antarctica, together with the other three countries who had been involved in the project, began negotiations over how this mutually beneficial relationship could be extended.

The treaty covers the entire region south of latitude 60° south. The agreement states that any activity carried out under the treaty will have no effect on existing territorial claims.

This means that even countries with conflicting territorial claims over Antarctica can work together, with no danger of their claims over the region being weakened as a result.

The Antarctic Treaty will remain in place indefinitely, ensuring the continued collaboration between scientists – and nations – for years to come.

Basic Requirements of the Antarctic Treaty

The requirements for countries who have signed the Antarctic Treaty include:

You can see the full text of the Antarctic Treaty here.

How Does The Antarctic Treaty Benefit Mankind?

Antarctica is an environment unlike any other on Earth. Scientists specializing in many different fields rely on the unique set of characteristics present on the continent in order to carry out their research.

Although the inhospitable environment means that it is an area of low biodiversity, biologists visit Antarctica to study its unique organisms, which range from bacteria to vertebrates such as seals and seabirds.

Although most of Antarctica is covered by a thick sheet of ice, lakes do exist

Underneath the thick layer of ice that covers much of Antarctica are several lakes. Because conditions in these lakes resemble those on Europa – one of Saturn’s moons – biologists believe that if life can exist in the lakes, then it could potentially exist on Europa, too.

With no major habitations in Antarctica, there is very little light pollution in the region. The skies over Antarctica are the darkest and most transparent of any on Earth, offering astronomers some of the best conditions available for viewing space.

Antarctica is the best place on earth to find meteorites, and since 1974 over 23,000 specimens have been collected on the continent.

Geologists visit Antarctica to study the movement of tectonic plates (the vast plates that are continuously moving across the surface of Earth).

Also of interest to geologists is the Gamburtsev Mountain Range, which is buried under 600 m (2,000 ft.) of ice. It is thought to equal the Alps in size.

In recent years, much of the research carried out in Antarctica has focused on climate change.

In 1985 scientists studying data collected at Antarctica discovered that there was a hole in the ozone layer (the region of the earth’s atmosphere that absorbs the sun’s ultraviolet radiation) above the continent.

This hole was linked to man-made chemicals, in particular those known as chlorofluorocarbons (CFCs), which were at the time common in aerosol sprays and air conditioning systems.

The discovery of the hole in the ozone layer led to a worldwide ban on the production of CFCs in 1989. As a result, ozone levels began to increase in the 2000’s.

Antarctica’s thick ice gives scientists the ability to ‘go back in time’ to see what the environment was like in earlier years. This they do by drilling into the ice and taking samples known as ‘ice cores’.

Analysis of ice cores enables scientists to reconstruct the climate at the time at which the core was formed. The deepest cores reach depths of over 2 miles (3.2 km).

Using this data, scientists can understand what the Earth’s climate was like in the past 800,000 years.

Using ice core data from the Antarctic Ice Sheet, scientists are able to tell the story of climate change, long before humans were influencing it. This data can then be compared to more recent temperature information and climate data to understand trends, or how exactly the Earth’s climate is changing.

Find out about the Arctic: Arctic Facts

Discover the wildlife of the Arctic: Arctic Animals List with Pictures & Facts

1 thought on “What Is The Antarctic Treaty? A Look At One Of The World’s Most Important Scientific Agreements”