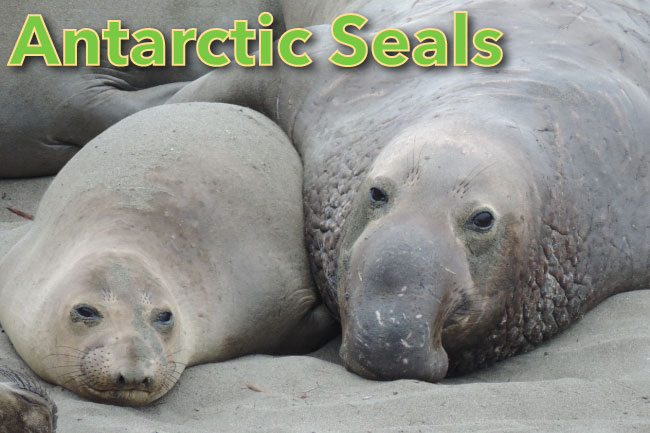 A list of Antarctic seals, with pictures and information. Part of our Antarctica series.

Seals are semi-aquatic marine mammals. They have many adaptations for a life spent in or near the water. Their hands and feet have evolved into flippers, and they have a layer of blubber under their skin to provide insulation.

Seals’ closest relatives are bears and musteloids (musteloids are animals like weasels, otters and wolverines).

Seals are members of a group of animals called Pinnipeds. This group also includes walruses and sea lions (scientists refer to all of these animals as ‘seals’). There are 33 pinniped species.

There are three main families in the pinniped group.

The Crabeater Seal above is a member of the Phocidae family. It doesn’t have external ears.

Phocidae are also called ‘earless seals‘ or ‘true seals‘. This seal family is the best adapted to an aquatic life, and can swim very efficiently. They spend more time at sea than the eared seals (see below), and travel longer distances.

However, they can’t use their hind legs for walking on land, and have to drag themselves along with their front flippers when out of the water.

Five of the six species of seals in Antarctica are earless, or ‘true’, seals. They are known as ‘earless seals’ because they don’t have external ears.

Otariidae are also known as ‘eared seals‘. This family includes sea lions and fur seals. The only eared seal found on Antarctica is the Antarctic Fur Seal.

Otariids can turn their hind flippers forwards and use them to walk on land. This means that they can move faster than true seals when out of the water.

In the water otariids are fast and agile, but not as efficient as the true seals. They don’t tend to venture far from their breeding grounds.

There are six species of seal in Antarctica. These are:

Let’s learn a bit more about these Antarctic seals …

The Antarctic Fur Seal is one of the smallest Antarctic seals, but it is still a fairly large animal. It can grow up to 2 metres (6.5 ft.) long, and weighs up to 200 kg (440 lbs). Males are substantially bigger than females.

It is the only member of the ‘eared seal’ family found in the Antarctic.

95% of the world’s population breeds on South Georgia – one of a small group of British-owned islands to the north of Antarctica. As many as 4 million Antarctic Fur Seals may congregate here in the breeding season.

In the 18th and 19th centuries, the Antarctic Fur Seal was hunted almost to extinction for its fur. Today it is a protected species, and its conservation status is ‘Least Concern’.

There are more Crabeater Seals than any other species of seal. The Crabeater seal has a global population of around 15 million. It is thought to be the most abundant large animal (apart from man) in the world.

Despite its name, the crabeater seal doesn’t actually eat crabs. It has evolved special teeth for eating Antarctic Krill. They act like a sieve for filtering the Krill out of the water.

The Leopard Seal is the second-largest Antarctic seal. It grows up to 3.5 m (11.5 ft.), with females being larger than males. A true Antarctic seal, the Leopard seal is found in the waters and pack ice that surrounds Antarctica.

The Leopard Seal is slender and powerful. It has long canine teeth for grabbing prey, but also has specially adapted teeth in the back of its mouth for filtering krill.

The Leopard Seal gets its name from the spots on its chest and underside, which are thought to resemble a Leopard’s spots. Its back is a dark grey / black colour.

Leopard seals are well known for their underwater singing. During the summer, the male Leopard Seal sings for several hours a day, swimming upside down and rocking from side to side while doing so.

The Leopard Seal is a ferocious predator. It not only eats fish, squid and krill, but also hunts penguins and even other seals; in particular the Crabeater Seal.

The Ross Seal is rarely found away from the Antarctic pack ice. At around 1.8 m (6 ft.) long, it is one of the smallest Antarctic seals, and a similar size to the Antarctic Fur Seal.

The Ross Seal has a dark back and silvery white undersides. The Ross Seal can easily be identified by its huge eyes.

The Ross Seal is known for strange twittering sounds both in and out of the water. The reasons behind this are unclear.

The Ross Seal was discovered by the British explorer James Clark Ross in 1841, but it remains one of the least-studied Antarctic pinnipeds.

The Southern Elephant Seal uses its nose to make loud roars, which are most often heard during the breeding season.

You can see the Weddell Seal up close in the video below:

The Weddell Seal lives on the icy coasts of Antarctica. It is found further south than any other mammal, preferring to live on the coastal ice rather than the pack ice floating in the Southern Ocean.

This big seal is named after James Weddell, the British captain who discovered it. Like most Antarctic seals, its diet includes of krill, fish, squid, and other small marine creatures. It can stay underwater for over an hour.

We hope that you have enjoyed learning about the six Antarctic seals. Would you be able to identify one from the other?