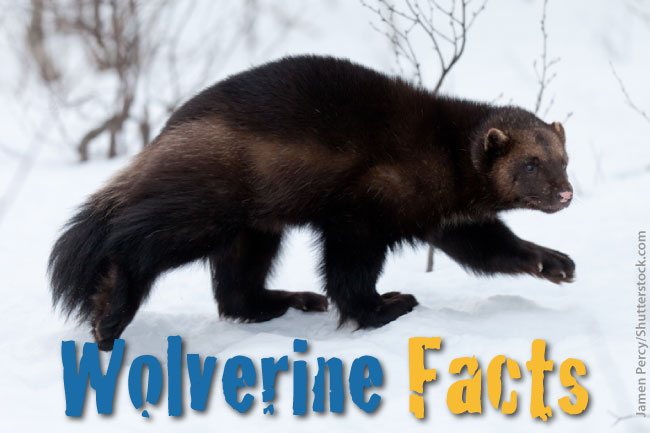 This page contains Wolverine facts for kids (and adults), and is part of our Arctic series. For a list of Arctic animals, see this page: Arctic Animals.

Tenacious. Ferocious. Highly aggressive. The wolverine has been described as all of these things, and with good reason; it is an efficient hunter, unafraid to tackle animals larger than itself. Tough, and able to survive in harsh subarctic conditions, this is a creature whose fearsome reputation is well deserved …

The wolverine’s scientific name is Gulo gulo, which originates from the Latin word meaning ‘gluttonous’, or ‘greedy’.

The wolverine belongs to the order Carnivora. This order, which includes humans, is also known as the ‘placental mammals’, or Eutherians. (Placental mammals give birth to live young, which, while growing inside the mother, were provided with oxygen and nutrients by an organ called a ‘placenta’.)

The wolverine is the largest member of the weasel (Mustelidae) family. This family also includes otters, badgers and beavers.

Scientists previously believed there were actually two distinct species of wolverine. However, it is now understood that the North American wolverine (Gulo Gulo luscus) is actually a subspecies of its European counterpart (Gulo Gulo gulo).

Short, stocky and built for power, the wolverine looks like a cross somewhere between a bear and a badger. Its thick fur and bushy tail keep it well insulated from the cold.

The wolverine’s coat is predominately brown with a white patch on the throat and chest. The shape and size of this white patch is unique to each wolverine. This makes photo identification of individual wolverines possible during field research.

The wolverine’s large, broad paws distribute its weight and prevent it from sinking into the snow.

The wolverine’s gait is lumbering, and it holds its head low when walking. However, don’t be deceived by this slow-looking appearance; the wolverine can gather surprising amounts of speed when necessary.

While it is not considered an arboreal (tree-living) species, the wolverine will climb trees when necessary.

Wolverines display sexual dimorphism (differences in appearance between males and females of the same species), with the males being larger than the females. Males weigh between 12 and 14kg (26-31 lb). Females weigh between 8 and 10kg (17 and 22 lb).

Female wolverines produce 1-5 cubs in late spring. The conditions of this time of year give the cubs a greater chance of survival. Wolverine cubs stay with their mothers for up to a year before becoming completely independent.

You can see what a wolverine looks like in the video below. Would you want to get this close to a wolverine?

Wolverines are solitary creatures, with males and females only coming together briefly to mate. Population densities of wolverines are low, which suits their solitary nature and correlates with their huge territories. A male wolverine’s range can be over 600 km² (230 square miles). This can overlap the ranges of several females, whose ranges are substantially smaller.

Wolverines are generally nocturnal, but can also be active in the day.

Where Do Wolverines Live?

Well adapted for a cold climate, wolverines are found in subarctic areas all around the world. Here large forests of birch, poplar and conifers predominate in a wilderness that lacks biodiversity (the number of species found in an area) and where snowy conditions predominate in the winter.

The wolverine is found throughout Canada and Alaska, and also in some western states of the US.

Wolverines were once more widespread in Europe, but persecution through hunting and trapping has reduced their range to Finland, Norway, Sweden and across Russia. It is also found in north east China.

In short, a wolverine will eat pretty much anything! They are opportunistic omnivores (plant and meat eaters), with a diet ranging from berries to caribou.

Wolverines are very efficient predators. As well as taking small prey such as hares and rabbits, they will also tackle larger animals such as caribou, particularly if the prey animal appears weak or distressed.

Wolverines will also target domestic animals such as sheep, which can bring them into conflict with humans.

Carrion also forms a large part of the wolverine’s diet. They will happily make the most of animals that have succumbed to the harsh subarctic conditions. With their superb sense of smell, wolverines can even locate animals that have been buried deep in the snow.

Wolverines also scavenge prey killed by other animals such as wolves. Their strong jaws make light work of bones so nothing is wasted, and they are known to cache (store) excess food for later consumption. A wolverine can travel up to 24km (15 miles) a day in search of food.

Despite their formidable reputation, the wolverine does have a few natural enemies. Wolves, bears and mountain lions have all been known to predate on the wolverine; mainly due to conflict over food.

The IUCN lists the wolverine as an animal of least concern, however this is not all as it seems. The IUCN looks at the overall global population, rather than localised populations.

In the US, the wolverine population is relatively stable; whereas in Europe the wolverine is still facing persecution. Indeed, the European Mammal Assessment classified the wolverine as ‘Vulnerable’.

The main threats to wolverines come from two main areas. Changes in land use affect their available habitat. This brings them into closer contact with people, and causes them to face persecution.

Historically, the wolverine ranged over more southern and eastern areas of North America yet decades of predator persecution reduced this considerably until the current spread today.

Fragmentation of populations also poses a threat to wolverines. Fragmentation is usually caused by human influence. Increased urbanisation and persecution due to agricultural conflict creates isolated populations unable to connect with each other.

Fragmentation leads to small groups with a lack of genetic diversity. This in turn leaves them vulnerable to disease and population crashes.

Wolverine Facts For Kids: At A Glance

We hope that you have enjoyed learning about the wolverine. You can learn about more Arctic and subarctic animals here: Arctic Animals.

You can also find out more about the frozen ocean and inhospitable lands of the Artic itself here: Arctic Facts.