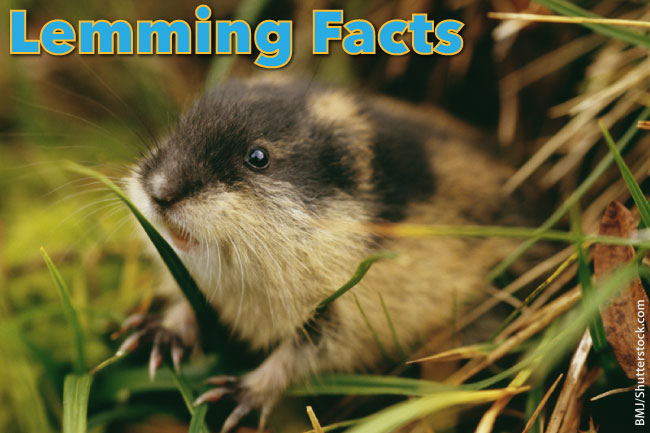 This page contains lemming facts. We’ll find out all about the Arctic rodent with a rather strange reputation for jumping off cliffs. We’ll find out if its self-destructive tendencies are fact or fiction, and discover lots more lemming information along the way …

Be sure to watch the video of a confrontation between a cat and a lemming. Which animal do you think runs away?

Lemmings are small rodents that live in the Arctic tundra. There are around 20 species of lemming, and they are close relatives of voles and muskrats.

Under certain conditions, lemmings undertake mass migrations to search for food and a new place to live. This has given rise to the myth that large numbers of lemmings deliberately jump off cliffs. We’ll find out more about this further down the page.

Lemmings are rodents, and members of the subfamily Arvicolinae (a subfamily is group of animals that share certain characteristics). Other arvicolines include voles and muskrats.

There are around 20 different species of lemming (this isn’t an exact number because scientists often disagree about whether an animal is a separate species or just a subspecies of another animal).

Below is a list of lemming species, together with their scientific names.

Lemmings are small, furry animals with short tails and long whiskers. They have small ears and eyes and blunt faces. Their hair is long and thick, providing insulation against the Arctic cold.

Lemming species vary in size. Smaller species such as the Wood Lemming and Steppe Lemming grow to around 12 cm (4.7 in) in body length (not including tail), and weigh around 30 g (1 oz). 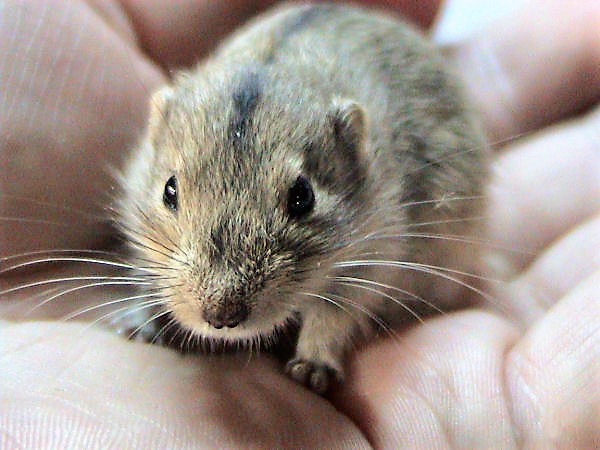 Steppe Lemmings are one of the smallest lemming species.

Lemmings have short tails, which don’t exceed 2 cm (0.8 in) in length.

Lemmings vary in colour. Depending on the species they can be grey, brown, yellow-brown or black. Lemmings are fairly conspicuous animals and their relatively bright coats may serve as a warning that they will defend themselves aggressively against predators (see the video below).

The Norway Lemming (also known as ‘Norwegian Lemming’) is perhaps the most recognisable lemming species. It has golden-brown fur with darker patches.

In the video below, you can see that a Norway Lemming is no pushover for a predator. It will defend itself against a much larger animal (in this case a cat!)

Where do Lemmings Live?

Lemmings are found in Arctic and subarctic regions of North America, Europe and Asia. Countries in which lemmings live include the USA (Alaska and some northern states), Canada, Norway, Sweden, Greenland, China and Russia.

Most lemmings live in tundra: cold, treeless lands in which the soil is permanently frozen. Lemmings are also found in northern forests (taiga) and grasslands (steppes).

During the winter lemmings live in tunnels and grass nests under the snow. Here it is warmer and more secure from predators.

In the summer, lemmings move along ‘runways’ through the vegetation and dig underground burrows.

Lemmings are herbivores (plant eaters) and aren’t too choosy about what they eat. Their diet includes leaves, shoots, roots, bulbs and mosses. Lemmings have been known to cache grasses and sedges in underground food stores.

Like all rodents, lemmings have front teeth (incisors) that grow continuously throughout the animal’s lifetime. This allows them to eat a diet of tough plants without their teeth wearing down.

Most lemmings are solitary animals, only coming together to mate. Some species live in small groups. Lemmings are active during both the day and the night.

Despite being ‘subniveal’ (living under the snow) in the winter, lemmings do not hibernate.

Lemming populations undergo extreme variations in size. Some years they approach extinction levels, whereas in others there are too many lemmings for an area to support. In these ‘boom years’, large numbers of lemmings disperse in search of food and shelter.

Lemming population booms occur after several favourable years, during which food is readily available, weather conditions are good and predation is low.

Lemmings are able to reproduce less than a month after being born. After a gestation period (the time it takes baby animals to grow inside the mother) of 3 to 4 weeks, lemmings give birth to up to 13 young (depending on the species).

Do Lemmings Really Jump Off Cliffs?

Because of their ability to breed extremely quickly when conditions are right, huge numbers of lemmings can suddenly appear at the same time. The lemmings disperse in every direction in order to find suitable territory for themselves.

However, natural obstacles, such as rivers, rocks or cliffs, can get in the way. The sheer numbers of lemmings frantically trying to get away may mean that some of them end up being pushed into the water (or even over a cliff edge).

Lemmings can swim, and large groups of lemmings attempting to cross water may have given rise to the ‘suicidal’ lemming myth.

All of the lemming species that are categorised in the IUCN Red List are rated ‘Least Concern’.

Lemmings have a large number of predators. From Snowy Owls to Wolverines, a lemming offers a handy protein snack!

Lemmings are important animals in their ecosystems. During years in which the lemming population is very low, Arctic Foxes have fewer young.

We hope that you have enjoyed learning about lemmings. You can find out about more Arctic animals here: Arctic Animals.

You can learn more about the Arctic here: Arctic Facts.