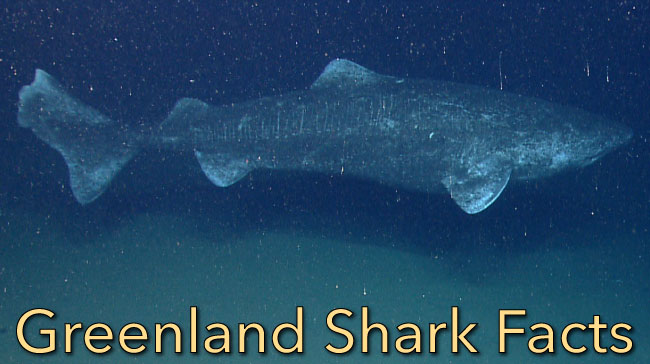 Secretive and elusive, the world of the Greenland shark is still a mystery to scientists. Living in cold sub-arctic waters, these sharks are one of the few species that remain this far north all year round.

The Greenland shark, like all sharks, belongs to the subclass Elasmobranchii; or cartilaginous fish. This subclass also includes skates and rays.

Fish in this subclass have skeletons made of cartilage, which is more flexible than bone.

(The other main fish group is the Osteichthyes, or bony fish subclass)

Finally, Greenland Sharks are placed into the family Somniosidae, or sleeper shark family. This group contains 20 species, many of which are poorly understood due to their deep-sea lifestyle.

Greenland sharks are big sharks. Reaching lengths of up to 21ft (6.4m), they are on par with Great White Sharks. They have to do a lot of growing; they are born a mere 15 inches (38 cm) long!

Individual Greenland sharks can vary quite a lot in colour, being brown, dark grey or black, with occasional white spots.

The Greenland Shark’s eyes are small in comparison to its body, and it has a blunt snout. Its dorsal and pectoral fins are small.

Like most sharks, the Greenland Shark has rows of teeth that are continuously replaced throughout the animal’s lifetime. These are mounted in the upper and lower jaw muscles (not bone).

There is some excellent footage of a Greenland Shark in the video below:

The Greenland shark has several features common to all shark species. Its cartilaginous skeleton is flexible and also lightweight, aiding buoyancy. Unlike fish, sharks do not have a swim bladder. Instead they have a large oil filled liver which can make up to 30% of their body mass. While this helps them to stay buoyant, it has also attracted hunters who harvest the oil.

The 5 sets of gills positioned on either side of the head need to have water constantly moving over them in order to extract oxygen. For this reason, sharks have to swim continuously in a process known as ram ventilation. Unlike those of a fish, a shark’s gills are uncovered.

An excellent sense of smell is essential in an environment consisting of dark murky waters, and the Greenland shark has perfected this particular trait. This is necessary, as their small eyes provide limited vision.

In fact, Greenland Sharks can lose their sight completely after being attacked by parasites such as the copepod (a small crustacean) Ommatokoita elongate. This 2 inch long sucker will attach itself to the shark’s eye. It then causes lesions that result in the loss of sight.

The Greenland shark has teeth on its upper and lower jaw muscles. The top ones are more pointed to gain grip and the bottom ones are more serrated to tear and rip.

Inhabiting phenomenally cold waters, Greenland sharks are the most northern sharks known on record, and survive winter temperatures as low as 28°F (-2°C). To live in these hazardous conditions the Greenland shark has a unique adaptation: the equivalent of antifreeze in its flesh.

Trimethlamine oxide (TMAO) works by stabilizing enzymes and proteins in the shark’s body against the cold. The TMAO also makes the Greenland Shark’s flesh toxic to mammals.

Despite this additional protection, normal biochemical processes taking place in the shark happen far slower than those in their mammal counterparts. In fact they occur so slowly that the Greenland shark is believed to grow as little as 0.25 inches (0.56cm) per year.

The Greenland shark demonstrates ovoviviparity. This is where the female’s eggs hatch inside of her body and she then gives birth to live, fully formed young.

The exact gestation period (how long the unborn sharks take to grow) is unknown, but it is believed that around 10 young are born each time. Again, because of the lack of scientific research on the species, the location or timing of reproduction is unknown.

How Long Do Greenland Sharks Live?

Greenland Sharks are believed to have a lifespan of up to 200 years; although this is an extrapolation of current data (i.e. an educated guess!).

Greenland Sharks are a deep water species, and are found exclusively in cold arctic and sub-arctic seas. They are found in waters around Canada, Greenland, Norway and Iceland.

They prefer deep water in the summer, and while being recorded at a maximum depth of 7200ft, the normal range is between 600 and 2400ft.

In the winter, they are found in shallower regions and are often seen near the ice edges.

Like most sharks, the Greenland shark will eat anything it can – quite literally – sink its teeth into! It is believed to be an opportunistic predator and scavenger.

Autopsies (examinations of dead bodies) have discovered a wide range of species among a Greenland Shark’s stomach contents. In addition to skates, teleost fishes and carrion, seals, birds, caribou and even a polar bear skull have been identified!

Greenland sharks give the impression of being slow moving and sluggish. They are thought to be among the slowest moving sharks.

While little is known of the shark’s behaviour, biologists were surprised to observe them attacking Caribou swimming across estuaries. Whether the sharks perform this behaviour on other species such as seals is still unknown; however it is quite unexpected considering their build.

Commercial hunting has been the predominant threat to Greenland sharks, with Norway and Greenland often taking up to 30,000 a year. Greenland sharks are harvested for their large livers, which are used as a source of lubricant.

The other major threat has been bycatch. This is where the sharks are mistakenly caught by trawlers, trap fisheries and gillnets.

The species’ slow reproduction rate compounds these problems: the sharks are unable to replenish their numbers at an effective rate.

While actual population figures are unknown, due to their slow reproduction rate the IUCN lists the Greenland Shark as ‘near threatened’.

When Inuit hunters catch Greenland sharks, they avoid feeding the raw meat to their dogs. This is because the toxin contained within the flesh can incapacitate the animals. However, in Iceland, Greenland shark is the national dish. The meat has to be hung for many months until the toxins are no longer dangerous.

We hope that you have enjoyed reading these Greenland Shark facts. Discover more by visiting the pages below: