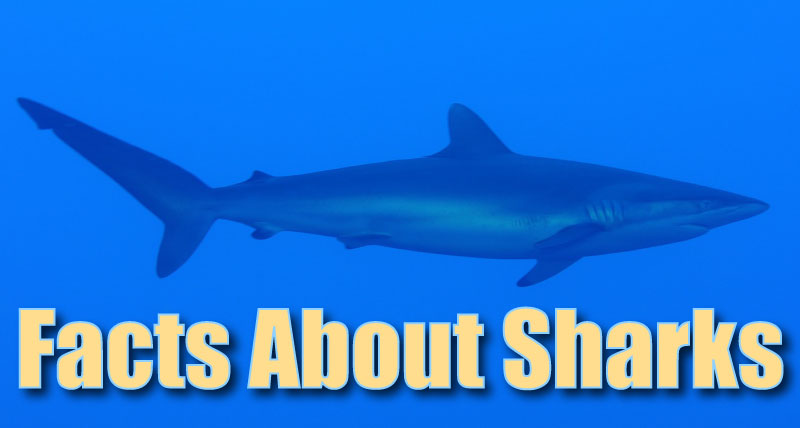 There’s more to sharks than big teeth and scary music! These facts about sharks for kids may change your mind about these awesome animals …

Let’s face it, sharks have got a bit of an image problem. Other big predators, such as tigers and wolves, are loved by people, despite being dangerous. Sharks don’t really have the same appeal.

Sharks aren’t cuddly, or furry, and they don’t have cute kittens or puppies. They also live underwater. Their home will always be an alien environment to us.

However, what is beyond doubt is that sharks are amazing animals. They may have a bad reputation, but they definitely are respected. The ferocity, speed and power of these fish – not to mention their big mouths and sharp teeth – make them some of the most feared animals in the world!

Continue reading to learn more about sharks, or visit these related pages:

Sharks are fish. They are members of a group of fish called cartilaginous fish, with the scientific name Chondrichthyes.

As the name suggests, shark skeletons are made out of cartilage, a substance which is similar to bone, but more flexible. Sharks have no real bones in their bodies!

Sharks have been around for 420 million years! That’s right: sharks existed before dinosaurs.

Sharks are extremely efficient at what they do and have few natural predators, which is why they have survived for so long.

How many types of shark are there?

There are over 450 species of sharks in the ocean. They range in size from 6 inches to 45 feet.

The most common type of shark is the Great White Shark – the most feared shark in the world! Great Whites are light grey in colour and have a pointed nose and a torpedo-shaped body which allows them to swim very fast.

One of the most unusual looking sharks is the Hammerhead shark. This species has a strange, hammer-shaped head with eyes on each side to give them a wider field of vision.

The second largest type of fish in the world is also a shark: the basking shark.

Sharks are very active at night, which is when they hunt. Sharks are solitary animals that usually hunt and live alone. However, sometimes a feeding shark will attract others who will try and get a bite of the action too! Sharks are not territorial animals so they often move around to different locations to find food.

Watch the video below to learn more about great white sharks.

What do sharks eat?

Most species of sharks are carnivores (meat eaters) at the top of the ocean food chain. They are not very fussy and will eat anything they can, including fish, squid, crabs, dolphins, seals and even other sharks. Other smaller species of shark don’t eat any meat at all and rely on plankton to survive.

Sharks have the most powerful jaws on the planet! Both their upper and lower jaws move individually, which allows them to get a powerful grip on their prey.

Sharks have very good senses which help them to hunt for prey. A shark’s sense of smell is extremely sensitive. The Great White shark can detect a single drop of blood in the water surrounding them.

Sharks also have excellent hearing and vision. They can hear much deeper sounds than humans and some species can detect sounds more than 700 feet away. Sharks can see in the dark which is great for hunting at night.

As well as the main five senses, sharks also have an extra one called the Ampullae of Lorenzini. This allows them to feel the electrical charge of prey in the water and is very useful for helping them to find food.

Where do sharks live?

Sharks live in oceans all over the world. Most shark species prefer warmer climates and are often found in the sea around Australia, Florida and Mexico. However, other types of sharks like cold water and live in the icy waters of Alaska and Iceland.

How do sharks breathe under water?

Sharks are a type of fish which means they can breathe easily under water. They breathe through gills that are located on either side of their bodies.

Why do sharks have so many teeth?

Every shark has multiple rows of teeth on the top and bottom of their mouth. These razor sharp teeth help the shark to rip its food into smaller pieces. The teeth often fall out, but they are soon replaced by new teeth that move quickly into place. A shark can go through an average of 20,000 teeth in its lifetime.

A shark’s teeth are so sharp they can penetrate almost anything!

Sharks have gained a reputation as the bad guys of the ocean. They have been known to hurt humans before, which make us very scared of them. Although they are sometimes seen as ‘man eaters’ sharks only usually attack when they mistake a person for a seal, or they feel threatened and need to defend themselves. On average there are only about 100 shark attacks each year. The most dangerous sharks are the Great White shark, the Hammerhead shark and the Tiger shark.

However, not all sharks are fierce carnivores. Some species such as the Basking shark and the Whale shark are gentle giants that actually feed on plankton.

About 75 species of shark are in danger of becoming extinct. This is mainly because of humans who hunt sharks for food and sport or because they are accidentally caught in fishing nets. Fishermen kill around 30 to 100 million sharks every year.

Sharks are an important part of the ocean eco-system so we humans must try to protect them from becoming extinct. There are many organisations who are dedicated to saving the shark. One such organisation is The Shark Trust.

Facts about sharks for kids

We hope you enjoyed sinking your teeth into these facts! Now that you know all about sharks, let’s try some shark related activities.