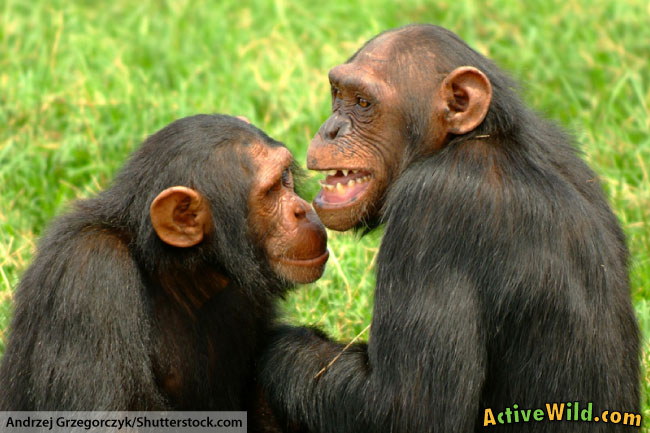 Chimpanzee information, with pictures, facts and video. This page is part of the Active Wild Endangered Animals series.

Sign language is when you use your arms, hands and fingers to make words instead of using your mouth. Chimpanzees are clever enough to learn sign language, and scientists have been able to communicate with these smart apes this way. Imagine having a conversation with a chimp!

Chimpanzees share lots of DNA (the stuff that tells our bodies how to grow) with humans. In fact, they’re our closest relations!

Want to learn more? This page is packed full of chimpanzee information and facts, so by the end you’ll be a chimp expert! Let’s get started…

No, chimps are not monkeys, although both are members of the group of mammals known as ‘primates‘.

In fact, chimpanzees are apes. And not just any apes. Chimpanzees (and their close relations bonobos) are members of the Hominidae, or ‘great ape‘ family.

Members of this family are called ‘hominids’.

The other members of the great ape family are gorillas, orang-utans … and humans!

Chimpanzees look a little like monkeys, but chimps don’t have tails, whereas monkeys do. In fact, this is the main different between apes and monkeys. Apes are also generally bigger than monkeys.

Next time you go to a zoo, remember to check for a tail to know if you’re looking at a monkey or an ape.

The chimpanzee’s closest animal relation is the bonobo. They’re both in the Pan genus. (A genus is a group of very closely related animals.)

What do chimpanzees eat?

Chimps aren’t too fussy with what they eat. They’ll take some fruit, leaves, insects, bugs, eggs, nuts and even bark from trees and pop it in their mouth. Can you imagine going to a chimp dinner party and being served up a fruit and insect salad – look out for those creepy crawling bugs moving around on your plate!

Sometimes chimps hunt animals that are smaller than them for meat, like goats or antelopes. When they do this, they share the meat with their families.

Chimps live in small groups called ‘troops’ and normally there are about 30 chimps in these families. They always make sure everyone has enough to eat when they have a big feast.

Chimpanzees have a range of gestures that they use to communicate with. See some of them in the film below.

Where do chimpanzees live?

Chimps are native to countries in Africa. Chimps make a home for themselves in forests and they like to climb trees. When they are sleepy, chimps make a nest bed for themselves at the top of the trees using branches and leaves. But they never sleep in the same nest two nights in a row. Would you like to make a new bed for yourself every single night? That doesn’t sound fun!

Chimps love living in the forest, but there habitat is endangered. This is because the trees are being chopped down to be used as firewood and other resources for humans. To keep chimps safe, they are often given a home in zoos or wildlife sanctuaries. This stops them from becoming extinct.

What do chimpanzees do through the day?

Remember how chimps live in groups together? The groups are made up of all different types of chimps, both boys and girls, and young chimps and older. These troops eat, sleep and go to different places all together. But throughout the day, single chimps go off and do their own thing.

Chimps love looking after each other so through the day they groom each other. This is when one chimp will run its fingers through another chimp’s hair. They pick out any fleas or bugs living in their friend’s hair. They also help each other if one chimp gets a scratch or cut on its body. Chimps are very caring!

Chimps also talk to each other using different types of communications. Do you sometimes when you look at your friend and make a funny face, then start laughing? Well, chimps do this too. They use facial expressions to tell other chimps how they’re feeling. Chimps also make noises, like how we talk to each other, to communicate with their friends. Sometimes chimps might make loud calls that sound like they are hooting, or whack tree trunks like drums to get a message to someone else. Living with chimps would be pretty noisy, don’t you think?!

Chimpanzees are really talented and can use tools to do stuff. Chimps are a bit like humans and can hold stuff with their hands. This is because they have ‘opposable thumbs’ like we do. Try touching your thumb to your index finger. You can do that because you have an opposable thumb. Chimps use their thumbs to hold tools and find food. Some things chimps do is find termites using the stem of a branch by using it to dig in the dirt or use a rock like a hammer to break open nuts. Chimps even use leaves to wipe their mouths after a meal like a napkin – they would have good manners at a restaurant!

How big are chimpanzees?

There are different species of chimpanzees in different parts of Africa, so not all of them are the same size. Normally, grown up chimps standing on their two back legs are 3 to 5 feet tall and they weigh between 55 to 110 pounds. If your teacher stood next to a chimpanzee they could almost be the same height!

Chimpanzees have a different body type to humans though. Their back legs are pretty short and their arms are really long. They have a thick chest, like someone who lifts a lot of weights. Chimpanzees can stand on their back legs, but when they walk they crawl like a baby does. They tuck their fingers up and make a fist with their hands then walk along on all fours.