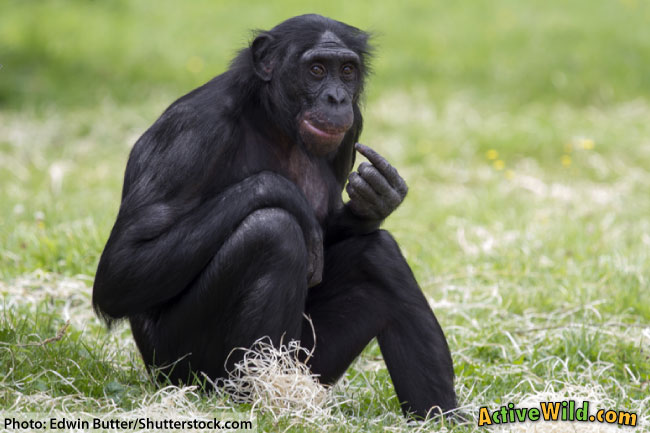 This page contains bonobo facts, pictures and information, and is part of our Endangered Animals series. Bonobos are also included in our list of African Animals.

Bonobos are one of the two species in the genus pan. (A genus is a group of closely related animals.) The bonobo’s scientific name is Pan paniscus.

The other member of the pan genus is the common chimpanzee (Pan troglodytes).

Bonobos are also known as ‘pygmy chimpanzees’. This name is misleading as the difference in size between the two species is small (chimps are slightly bigger, as we’ll find out below). The name ‘bonobo’ is thought to arise from a misspelling of Bolobo, a town on the Congo River.

The bonobo has long arms and legs, and its body is covered in black hair. It has a dark face, with pink lips and wide nostrils.

The bonobo is built for climbing trees. Its arms are longer than its legs, and are flexible and strong. It has large, long-fingered hands.

The bonobo spends most of its life in the trees. When on the ground, it walks on all fours, supporting its weight on its front knuckles. This means of locomotion is common among apes, and is known as ‘knuckle walking’.

Bonobos are able to walk on just their hind legs like humans, but tend to do this more when in captivity than in the wild.

What Is The Difference Between Bonobos And Chimpanzees?

The bonobo and common chimpanzee are closely related species, and look very similar. The bonobo is slightly more slender than the more robust-looking chimpanzee.

Chimpanzees are slightly bigger than bonobos, but there is a large overlap in their sizes: a large bonobo will be bigger than many chimpanzees.

The best way to tell the difference between a bonobo and a chimpanzee is by looking at their heads and faces.

A bonobo’s face is black, whereas the chimpanzee has a pale face. The bonobo’s hair on its head tends to grow out sideways, giving it a ‘side-parted’ look. In comparison, the chimpanzee’s hair grows backwards.

The chimpanzee is seen as a more aggressive, dynamic species, whereas the bonobo is regarded as being more passive and retiring. However, some studies suggest that this may be due to food being more abundant where the bonobo is found.

Bonobo Range: Where Do Bonobos Live?

The bonobo is only found in one country: the Democratic Republic of the Congo, in Central Africa.

Its range is bordered by rivers: the Congo River to the north, the Kasai to the south, and the Lualaba to the east. It is found in the Salonga National Park, which is shown in the map below.

Map of the Democratic Republic of the Congo, including the Salonga National Park.

The Democratic Republic of the Congo is Africa’s second largest country. Civil war has devastated the region, making study of the bonobo difficult.

Bonobos are found in primary and secondary lowland rainforests* in the Congo basin (the area of land that drains into the Congo River).

You can find out more about the Congo Rainforest (and other famous rainforests) here: Famous Rainforests List

Bonobo Diet: What Do Bonobos Eat?

The bonobo is omnivorous, which means that it eats both meat and plants. Fruit forms over half of the bonobo’s diet, and it will also eat plant stems and other vegetation.

Bonobos also eat animals such as rodents, squirrels, and other small mammals. Bonobos form hunting parties and will kill and eat monkeys.

The video below shows a female bonobo with her baby in the wild.

Bonobos live in groups that usually number between 30 and 90 individuals. Some groups are larger, containing as many as 150 bonobos.

Bonobos are known for being a peaceful species, settling conflicts peacefully rather than resorting to physical violence. Mutual grooming and touch form a large part of Bonobo behavior.

During the day, a bonobo group will split into smaller groups to hunt and forage for food. In the night, bonobos sleep in nests that they build in trees.

Bonobos often enter water, but they do not swim.

Members of the pan genus (i.e. the common chimpanzee and the bonobo) are man’s closest relations. They share 98.7% of our DNA, and are more closely related to humans than they are to gorillas.

Bonobos are smart animals, and their intelligence has been the subject of much study.

Bonobos can recognize themselves in the mirror, and use vocalizations and hand signals to communicate with each other.

Bonobos have also been trained to use keyboards with keys that represent words. A bonobo named Kanzi who was taught to communicate in this way learned the meanings of around 3,000 words.

The bonobo is classified as Endangered on the IUCN Red List. The bonobo is hunted for bushmeat by local people. Recent civil wars in the Congo region have not helped this situation.

Habitat loss is another major contributory factor to the bonobo’s endangered status.

We hope that you have enjoyed finding out about the peaceful bonobo. These endangered animals need our help, so spread the word by telling other people about their plight.