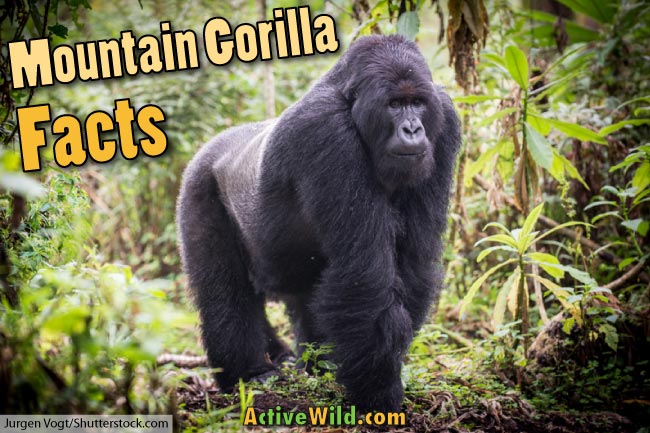 Mountain gorilla facts, pictures, video and in-depth information. The mountain gorilla is a subspecies of eastern gorilla, a critically endangered African primate. On this page we’re going to discover where it lives, its preferred habitat, what it eats, how it communicates and much more. We’re also going to find out how we can help this endangered animal.

Read on to find out some amazing mountain gorilla facts! This article is part of our endangered animals series.

Mountain Gorilla Facts At A Glance

Confused by terms such as subspecies? Visit this page: Animal Classification, and all will become clear!

A gorilla’s arms are longer than its legs. The mountain gorilla walks on all fours in a style known as knuckle walking. This is when the animal’s weight is carried by the knuckles of its forelimbs (arms).

The mountain gorilla will occasionally stand and walk on its hindlimbs (legs). This is often done when the gorilla wants to look threatening.

(Primates is an order–a large group of animals–that includes animals such as monkeys, apes and lemurs. You can find out more about orders and other animal groups here: Animal Classification)

Gorillas are social animals. They live in groups called troops or bands, which consist of up to 30 or more individuals (most troops number around 10 gorillas; the largest consist of over 60, but troops of this size are rare).

Gorilla troops display a complex social structure, and are led by a single older dominant male called a silverback. The silverback is named after the silver-colored hair on his back. Larger groups may include one or more adult males (called blackbacks), but usually the rest of the troop are females and their young.

The silverback leads the troop in social activities such as foraging, eating, nesting and traveling. He will also protect his troop against other male gorillas and potential predators. Silverbacks have been known to fight to the death defending their troops against leopards.

Gorillas are members of the great ape family, Hominidae. This family also includes chimpanzees, orangutans, and humans. Members of this family are called hominids.

Hominids differ from other primates in that they walk upright for longer periods of time, lack tails, and have larger, more developed brains.

We share 98% of our DNA with gorillas! Only the common chimpanzee and bonobo are more closely related to humans.

This mountainous region is spread over three countries: northwest Rwanda, southwest Uganda and in the east of the Democratic Republic of Congo.

There are two main populations of mountain gorillas. One is found in the Virunga Volcanoes, a range of mostly dormant volcanoes on the borders of Rwanda, the Democratic Republic of the Congo, and Uganda.

The gorillas in this region are found in the following national parks:

A slightly smaller population lives in the Bwindi Impenetrable National Park in Uganda.

You can see where theses areas are on the map below. You can zoom in and out and move the map around to see where mountain gorillas live in relation to the rest of Africa (and the world).

What do Mountain Gorillas Eat?

The mountain gorilla’s diet consists of roots, shoots, fruit and tree bark and pulp. The plants it eats contain plenty of moisture so the gorilla doesn’t often need to drink water. In fact, mountain gorillas appear to dislike water and avoid crossing streams.

The mountain gorilla is a key component of its ecosystem due to its constant grazing, which ensures regeneration of the forest.

In the incredible video below, you can see a lucky(?) tourist attract the attention of a mountain gorilla troop. Notice how he lowers his head – this shows the silverback that he is not a threat. It may have been scary at the time, but what an amazing experience!

A female mountain gorilla generally gives birth to a single baby following a 9 month pregnancy. The infant is only 4 pounds (2 kilograms) at birth and completely reliant on its mother. Young gorillas stay with their mothers for several years, and are only fully weaned after 3.5 years.

Eastern gorillas are listed as being critically endangered on the IUCN Red List. Research carried out in 2016 found that there were 880 mountain gorillas living in the wild. This is an improvement on previous numbers, and it appears that the number of mountain gorillas is slowly increasing.

Despite small increases in the mountain gorilla’s population, it still faces many challenges. The gorilla’s biggest threat comes from poaching. Gorillas are hunted for their meat. Infants are also captured and sold to the pet trade (usually after their parents have been killed).

The mountain gorilla is also threatened by habitat loss. Farming, logging and mining are all responsible for destroying the gorilla’s habitat.

Continuous warfare in the region, and the transmission of human diseases to gorillas are also factors in the gorilla’s endangered status.

As Africa’s human population continues to grow, the pressures from deforestation and hunting are likely to increase. As humans take over more and more habitat, the mountain gorillas are forced to retreat higher into the mountains, and their populations become ever more fragmented.

There are several charities working to help mountain gorillas. One of the most well-known is the Dian Fossey Gorilla Fund, founded by primatologist Dian Fossey.

We hope that you have enjoyed reading these mountain gorilla facts. Find out about more incredible animals here: Endangered Animals.