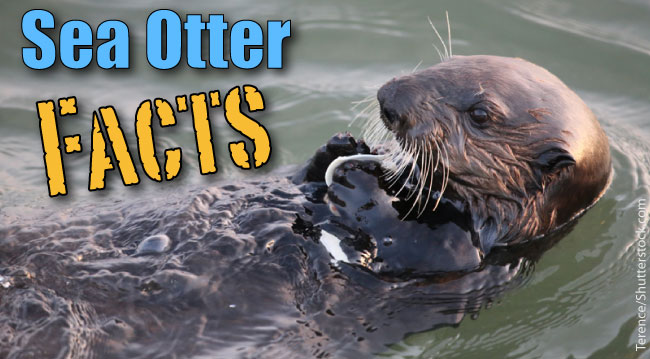 Sea otters are the heaviest members of the weasel family, and have adapted to the marine environment in which they live. This page contains sea otter facts and information, and is part of our Arctic Animals series.

Sea otters are members of the weasel family (Mustelidae). Sea otters are the heaviest of the 13 otter species (giant otters are the longest). Sea otters have several adaptations that allow them to live in a marine environment. These include fully webbed hind feet; nostrils and ears that can close; and thick, water-repelling fur that keeps them dry and warm.

The smallest marine mammal, sea otters can be as long as 4 feet (1.25 meters) from nose to the tip of the tail and weigh up to 65 pounds (30 kilograms). Sea otters are brown to almost black in color, but hands and necks whiten in older animals.

Where do Sea Otters Live?

Historically, Sea otters could be found from Japan, along the coast of Siberia, down through Alaska, British Columbia and the eastern North American coast. Today, their range is less extensive, with the majority of wild sea otters residing in Alaskan waters, although populations do exist in Canada, Russia, Japan, Washington and California. Sea otters can often be observed floating on their backs on the surface looking very relaxed and chilled out. Most sea otter activities are carried out at the surface, but foraging occurs on the sea floor.

The video below has some great shots of sea otters

What Do Sea Otters Eat?

Sea otters feast upon molluscs such as clams and mussels collected from dives to the sea floor. They cleverly use rocks as ‘tools’ to smash the shells by placing the rock upon their chest while floating on their backs and bashing the mollusc against it repeatedly. Sea urchins, crabs, squid, octopus and fish also make tasty meals for a sea otter. Sea otters are a ‘keystone species’ within kelp forests, maintaining the balance in the food web between kelp and sea urchins, allowing the forests to thrive. In maintaining kelp forests, sea otters also help to reduce levels of atmospheric carbon dioxide (CO2).

Sea otters are unique in the otter family as the only species to give birth in the water. Usually, a single baby (called a pup) is produced following 4 to 5 months of pregnancy. Mothers will continue to float on their backs, nurse their young and teach them to swim and hunt. Pups stay with their mothers for the first 8 months of life. Sea otters can live up to 23 years in the wild. Sea otters are highly social and can be found floating in ‘rafts’ of 10 to 100 individuals. Rafts tend to consist of females and pups together, and separate groups of males.

Sea otters were hunted almost to extinction for their fur and only 1 – 2,000 animals remained in the early 20th century. Today, the population stands at 100 – 150,000 animals, but the IUCN Red List still categorizes sea otters as endangered. Sea otters are vulnerable to oil spills which can drastically impact the insulating power of their fur, and destruction of kelp forests which are key foraging grounds. They are also preyed upon in the wild by sharks, bears, eagles and killer whales.

If you want to help sea otters, you can get in touch with charities such as Friends of the Sea Otter.

Learn about more amazing animals on our Artic Animals page.