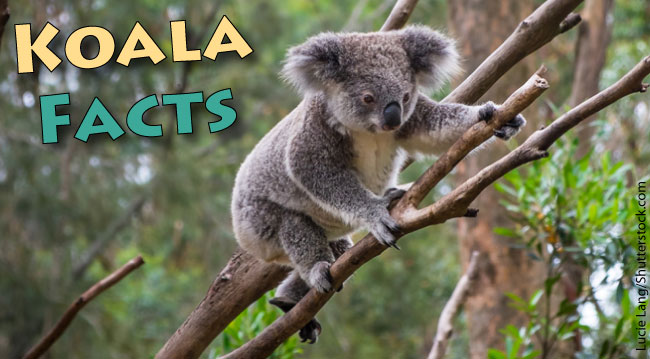 The koala is one of the most famous Australian animals. Known throughout the world for its cute looks, this popular marsupial lives in eucalyptus trees and spends most of its life asleep! This page contains koala facts for kids, and is in our Australian Animals series.

The koala ‘bear’ is not a bear at all, but a herbivorous marsupial, belonging to the family of mammals which have pouches in which they carry their young.

Cute and cuddly with thick ash grey fur, adult Koalas measure around 33.5 inches (85 cm) and weigh up to 20 pounds (9 kg). Koalas are found in Eastern Australia.

In 2016, the koala’s IUCN conservation status was changed from ‘Least Concern‘ to ‘Vulnerable‘. The number of koalas found in the wild is decreasing.

Watch the video below to see just what a koala looks like, and how big it is in relation to humans.

Eucalyptus trees are the primary habitat of Koalas and they are rarely observed anywhere else.

Koalas have opposable digits and large, sharp claws. This allows them to easily remain in the tree tops, even when dozing. The thick fur on their bottoms protects them from the hard branches on which they sit.

Koalas are territorial, and each Koala occupies several ‘home trees’ which are visited on a regular basis and used only by them.

What Do Koalas Eat?

When not asleep, Koalas spend most of their time eating eucalyptus leaves, consuming up to 2.5 lb (1kg) per day.

The leaves are poisonous, and contain very little energy. Koalas chew their food well, and their digestive process can take several days. Excess leaves are stored unchewed in the koala’s cheek pouches.

Koalas have evolved a specialized gut, part of which – the caecum – is longer in proportion to body size than that of any other animal.

Koalas use their highly developed sense of smell to decide which leaves are poisonous or safe to eat.

Koalas are known for being fussy eaters. Of the 600 varieties of eucalyptus leaves, Koalas will only eat 40 – 50 of these, and show a preference for only around 10.

Most koalas get all of the water they need from eucalyptus leaves. Only larger males have to find water to drink.

Young female Koalas give birth to a single baby (joey) around once a year. Older females may only give birth every 2 – 3 years.

Joeys are born just 35 days after mating. Looking like little pink jellybeans, they are blind, hairless and have no ears.

The new-born joeys use their keen, hard-wired, senses of smell and touch to locate the mother’s pouch. Like most other marsupials, Koala mothers keep their joeys in their pouch for around 6 months.

When they leave the pouch, the infant will ‘piggyback’ or cling to the mother’s belly until it is a year old.

Koalas communicate using a range of noises, and mothers and babies make soft clicking, squeaking and murmuring sounds to one another.

A common call which is shared by all Koalas is a cry which sounds like a baby screaming, made by individuals under stress.

Koalas were hunted during the 1920s and 30s, causing populations to plummet. Reintroductions have boosted the population somewhat, but at present it is estimated that only around 300,000 mature individuals exist in the wild.

In 2016, the koala’s conservation status was changed from ‘Least Concern’ to ‘Vulnerable’.

Each koala needs up to 100 eucalyptus trees, and the continued reduction in the extent of Australia’s woodlands is affecting koala populations. 80% of Koala habitat has already been destroyed since European settlement in Australia.

We hope that you enjoyed these koala facts for kids. Visit our Australian Animals page to find out about more creatures from ‘Down-Under’.