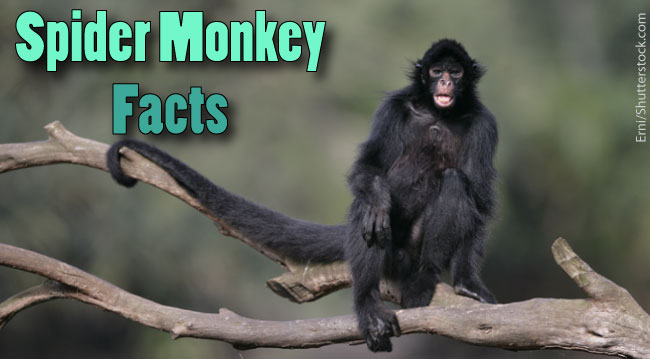 Spider monkeys have long thin limbs and tails: it’s not difficult to see how these primates got their name! Spider monkeys roam through the rainforest canopy in search of fruit and nuts. They are the most intelligent New World monkeys.

Sadly, like many rainforest animals, spider monkeys are under threat – mainly due to habitat loss. This article contains spider monkey facts, and is part of our Rainforest Animals series. Be sure to watch the video of spider monkeys in the wild!

There are seven species of spider monkey. All belong to the genus Ateles (a genus is a group of closely-related animals).

Spider monkeys live in untouched areas of rainforest in Central and South America.

Spider monkeys have long, thin arms and legs, and a long prehensile tail that can grab on to branches.

Spider monkeys range in colour from black to brown, red to yellow, and even white.

The largest and most apelike of the monkeys, spider monkeys can weigh as much as 25 pounds (11kg) and reach 18 inches (45 cm) in length, not including their amazing tails, which can grow to 36 inches (90 cm).

Spider monkeys are able to swing hand over hand through the trees due to their flexible shoulder joints.

The ends of their tails have no hair; the ridged skin there allows them to grasp both branches and food. They are able to use their tails like a fifth arm. This gives them a spider-like appearance, hence their name.

Spider monkeys are great source of entertainment at zoos around the world and are called the ‘trapeze artists of the jungle’.

You can see spider monkeys in the wild in the video below:

Spider monkeys live in communities of 20-40 members, called a troop. These diurnal (active during the day) creatures cover about one half-mile of distance each day, spending their time eating fruits, nuts, and seeds, as well as grooming each other to remove dirt and insects from their fur.

The troop can separate into smaller groups during the day to make feeding easier and to ensure the safety of the community. As night approaches, the smaller groups of 5-8 monkeys re-join their companions and sleep together in the high canopy of treetops.

When spider monkeys sense predators approaching, they will make barking sounds to deter them. If that doesn’t work, they will shake the branches of the trees with their arms and legs, while hanging from their tails. They will even break off and drop “twigs” weighing up to eight pounds to frighten the intruder away.

Female spider monkeys give birth to one baby every 1-5 years. Pregnancy lasts about 7.5 months. When the baby is born, it cannot swing, walk, or take care of itself, so it clings to its mother’s chest fur and feeds on her milk.

At about four months, the young spider monkey begins riding on its mother’s back.

Although spider monkeys are able to eat fruit at three months, they continue to be nursed until they are around two years old.

By age four, the spider monkey reaches maturity. Male monkeys will continue to live in their mother’s community for the rest of their lives. However, females will leave to find a new community in which to live, mate, and have babies of their own.

Spider monkeys can live in captivity up to around 35 years. In the wild, they can live to around 27 years.

Because spider monkeys live and forage high in the trees, they have few predators. However, babies have been captured by eagles, owls, and hawks. Also, the lightning fast, tree-climbing jaguar is a real threat, as well as pumas, ocelots, and large snakes such as the anaconda. They can also be carried away by the harpy eagle.

As you can see from the list below, all seven species of spider monkey are threatened, with all but one species (the red-faced spider monkey) being either “Endangered” or “Critically Endangered”.

The above information is from the IUCN Red List.

It is believed that there were as many as 400,000 woolly spider monkeys when Europeans first settled in the New World; today, there may only be around 400 left.

There are several organisations that have been founded to protect spider monkeys. Monkey World is an ape rescue centre in the UK. See if you can find a similar organisation in your country.

We hope that you have enjoyed reading these spider monkey facts.

You can find out about other amazing rainforest animals on this page: Rainforest Animals List Page.