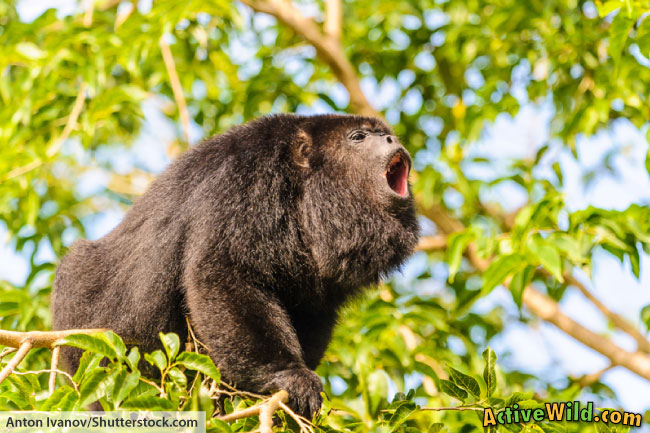 This page contains howler monkey facts and information. You’ll find out where howler monkeys live, what they eat, how they socialize and you’ll even hear the sounds that they make!

This page is part of our Rainforest Animals series.

Watch the videos below to see howler monkeys in their natural habitat … and also to hear them howling!

Known for their loud calls, the 15 species of howler monkey live in the forests of South and Central America.

Howler monkeys are among the loudest land animals, not just in the rainforest, but in the whole world!

Howler monkeys are also sometimes kept as pets. How would you like to live with one of the loudest animals in the world?

How To Recognise A Howler Monkey

Howler monkeys range in height from around 2 to 3 feet (60 – 90 cm). They have extremely long tails, which can be as long as – and even significantly longer than – their height.

Their tails are ‘prehensile’, which means they are able to grip. They are used to hold onto branches, and also to reach food that would otherwise be too far away.

Males are taller and heavier than females.

Howler monkey species vary in colour, and can either be black or various shades of brown and orange.

Howler monkeys have an enlarged hyoid bone in their throats. This amplifies their calls. 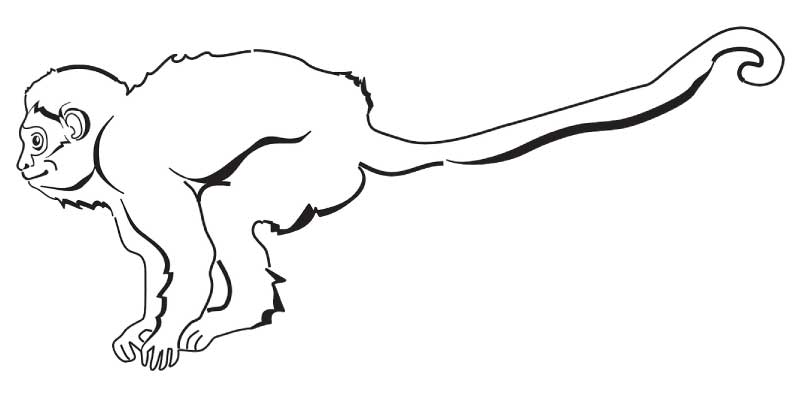 How Howler Monkeys Move Around

Howler monkeys are big and rather slow-moving when compared to other monkeys.

Howler monkeys usually walk along the tops of branches on all fours, using their tails in addition to their hands to maintain their balance and prevent themselves from falling.

Howler monkeys don’t like to jump from tree to tree. They prefer always to have a hand, foot, or tail hold on a tree as they reach over to the next tree.

Howler monkeys have been known to link together hand-to-tail between trees, making a bridge for young howler monkeys to walk across. It’s a long way down from the canopy!

You can see how howler monkeys move from tree to tree in this video. Warning: there is a heart-stopping moment when one of them slips!

Howler monkeys live in troops of between 10 and 20 monkeys. There are always more females than male monkeys in the troop. Living in a troop allows the monkeys to protect their feeding grounds and to look after their young. It also provides extra protection from predators.

Howler monkeys are ‘diurnal’, which means they are active during the day and sleep at night – just like us!

Howler monkeys get their name from the loud howls, grunts, roars and barks that they make.

Listen to the video below to hear howler monkey sounds.

Howler monkeys are most vocal at dawn and dusk. The troop’s cries tell other troops where they are and how big their troop is. This helps to prevent fights among different troops.

Howler monkeys are very territorial but they do not often fight other troops. The noise is often enough to keep competing troops away.

The Loudest Land Animal In The World?

Howler monkeys are the loudest animals in the world. When a whole troop of howler monkeys get together and start howling, barking, and grunting, the noise can be heard up to three miles (4.8 km) away!

How Long Do Howler Monkeys Live?

Howler monkeys can live to be about 15 to 20 years old.

What Do Howler Monkeys Eat?

Howler monkeys get all the liquid they need from the fruits and plants they eat.

Howler monkeys are relatively large animals, and spend most of their time in the trees. This means that, apart from occasional attacks from harpy eagles, they don’t have many predators.

The howler monkey’s biggest threat comes from deforestation. Humans have also hunted howler monkeys for their meat and fur.

We hope that you’ve enjoyed learning about howler monkeys. If you have any questions then feel free to ask in the comments section below.