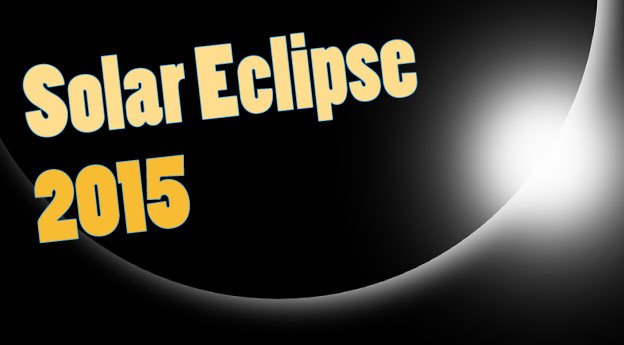 Tomorrow (Friday 20th March 2015), people in some parts of the world will be able to watch a total solar eclipse. Read on for a complete guide on how to watch this incredible astronomical event …

Here in the UK, we’ll only get to see a partial solar eclipse: but it’s still plenty to get excited about!

(The eclipse has now been and gone! Read our report of this amazing event here: Solar Eclipse 2015 Report)

In South-East England, the moon will cover around 85% of the sun.

The effect gets stronger the further north you go.

In the Hebrides, the moon will cover 98% of the sun.

The eclipse will also be visible from Europe, and parts of Africa, Asia and the Middle East.

The solar eclipse will not be visible by most people in North America. Only those in St Johns in Newfoundland, Canada will get to see it, and even here the effect will be weak.

The effect of a solar eclipse can be quite spooky. Everything goes dark … in the day time!

In the UK, the eclipse starts at around 8.45 a.m., and reaches its peak at around 9.30 a.m. Times differ slightly depending upon where you are in the country.

You can check this site to see when the eclipse will be taking place in other countries.

Don’t Look At The Sun!

If you are going to watch the eclipse, remember NOT to look directly at the sun!

No matter how tempting it is, you risk permanant damage to your eyes if you look at the sun. The link below contains instructions for watching the eclipse safely.

How To Watch The Solar Eclipse

There are a number of ways in which you can watch the eclipse safely. This document, produced by the Royal Astronomical Society, gives further details:

How To Watch A Solar Eclipse (pdf file).

What Is A Solar Eclipse?

A solar eclipse occurs when the moon passes between the sun and the earth.

The moon is much smaller than the sun, but because it is much closer to the earth, when it passes it appears to cover the sun.

In a total eclipse, the moon completely covers the sun. When this happens, everything goes dark, like a mini night-time!

In a partial eclipse, only part of the moon gets in the way, and some light can still get through. The effect is like a cloudy day.

During a lunar eclipse, the earth comes between the sun and the moon. The shadow cast by the earth causes the moon to go dark.

In a solar eclipse, it’s the moon in the middle!