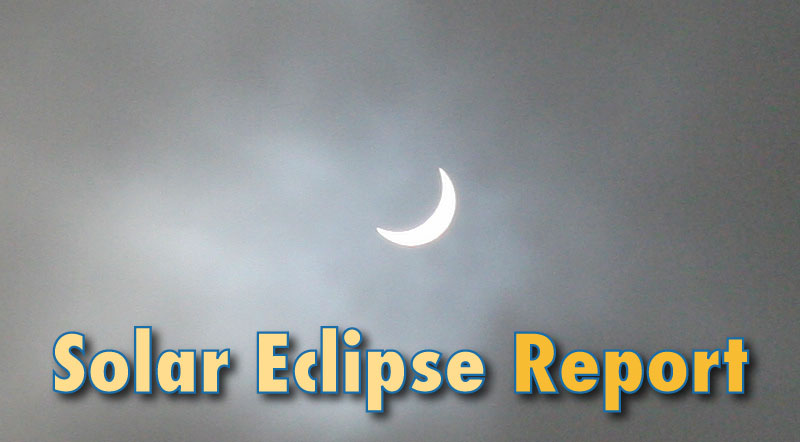 Welcome to the Active Wild Solar Eclipse 2015 UK Report. The weather forecast was bad: cloudy and cold. Did the clouds clear or was the eclipse a big disappointment? Read on to find out …

We had seen the weather forecast for East Sussex, and weren’t very hopeful of getting a good view of the eclipse, let alone any good photos.

At around 8.45 a.m. – the time the eclipse had been predicted to begin – the sky was grey and the clouds were thick; conditions were even worse than we had expected. The sun was nowhere to be seen.

We set up the cameras just in case the situation changed. However, it seemed that the most likely outcome was that it would start raining.

Thankfully, the rain held off.

As the morning drew on the sky did seem to be getting darker … or were we just imagining it? The sun itself was still hidden behind the clouds. To be honest, if we hadn’t known that the eclipse was taking place, we probably wouldn’t have noticed anything out of the ordinary.

At 9.15 a.m. the sky was still overcast. It was hard to tell if the low light was due to the cloud or to the eclipse itself. Our eyes were drawn to a flock of jackdaws flying overhead, and to a robin hopping around in a nearby tree. All very nice, but we were here to see an eclipse!

The sun, with the moon passing across it, looked very much like a crescent moon. It looked out of place and rather eerie.

As the clouds continued to pass, our view of the sun came and went. However, the thickness of the clouds did at least allow us to view the eclipse without eye protection.

It only got too bright to view at one point, and even then we were probably being over-cautious.

We were able to take several photos of the eclipse, some of which you see on this page.

At around 9.50 a.m., a thicker band of cloud came over, and the eclipse was hidden once again. After this, the sky slowly began to brighten. However, this was probably due as much to the cloud clearing as to the eclipse ending.

These are some of the photos we took of the eclipse. You can click on the images to enlarge them. Effects have been used on these photos – the sky wasn’t really this dark. As we have said in the report, it was more like a grey, overcast day.

The weather hadn’t been perfect, and it was only a partial eclipse, but it was still an amazing event to have witnessed.

We hope that you managed to get a view of the eclipse too. Perhaps the sky was clearer where you were and you were able to get an even better view than we did!