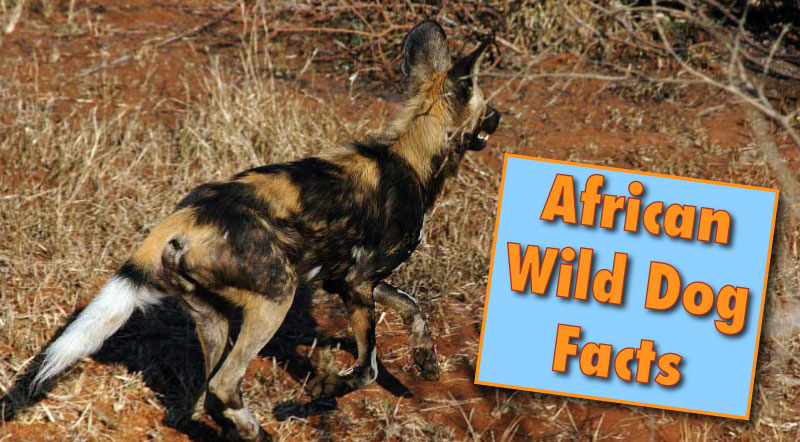 African wild dogs are tall, thin canines. They have large, rounded ears, which help them not only to hear very well, but also to keep cool. Their coats are a mixture of brown, black and white fur. Their scientific name, Lycaon pictus, means ‘painted wolf’.

Watch the video below to see what African wild dogs look (and sound) like.

Most African wild dogs live in savanna, which is a dry, wooded grassland habitat. They are also found in more forested areas, but their method of hunting (see below) is not as suited to this kind of habitat.

Where Does The African Wild Dog Live?

African wild dogs live in Sub-Saharan Africa. This is the area of Africa under (south of) the Sahara desert. African wild dogs used to be far more widespread than they are today, and they are now considered to be extinct in many African countries.

African wild dogs are pack animals. They live and hunt in packs that number from fewer than 10 to more than 40 members. Pack sizes have shrunk as the African wild dogs became threatened. Each pack is led by a dominant couple.

African wild dogs are diurnal (active during the day). They hunt by sight, exhausting their prey by pursuing it at high speeds over long distances.

The dogs’ main prey is antelopes. They will also take a variety of small to medium-sized animals such as hares, birds and warthogs, together with larger species such as wildebeests.

One of the African wild dog’s biggest natural threats is lions. This is one dog vs cat battle in which the cat will win! African wild dogs can also have their kills stolen from them by hyenas. Hyenas let the dogs do the hard part before coming in and taking the food for themselves.

What Is The African Wild Dog’s Conservation Status?

Why Is The African Wild Dog Endangered?

The main reason that African wild dogs are endangered is habitat loss. They are also occasionally hunted by farmers, who see them as a threat to their livestock.

How Many African Dogs Are Left In The Wild?

There are fewer than 5,000 African wild dogs left in the wild: their population could be as low as 3,000.

We hope that you have enjoyed these African wild dog facts.

You can find out about other endangered animals on this page: Endangered Animals List with Pictures & Facts