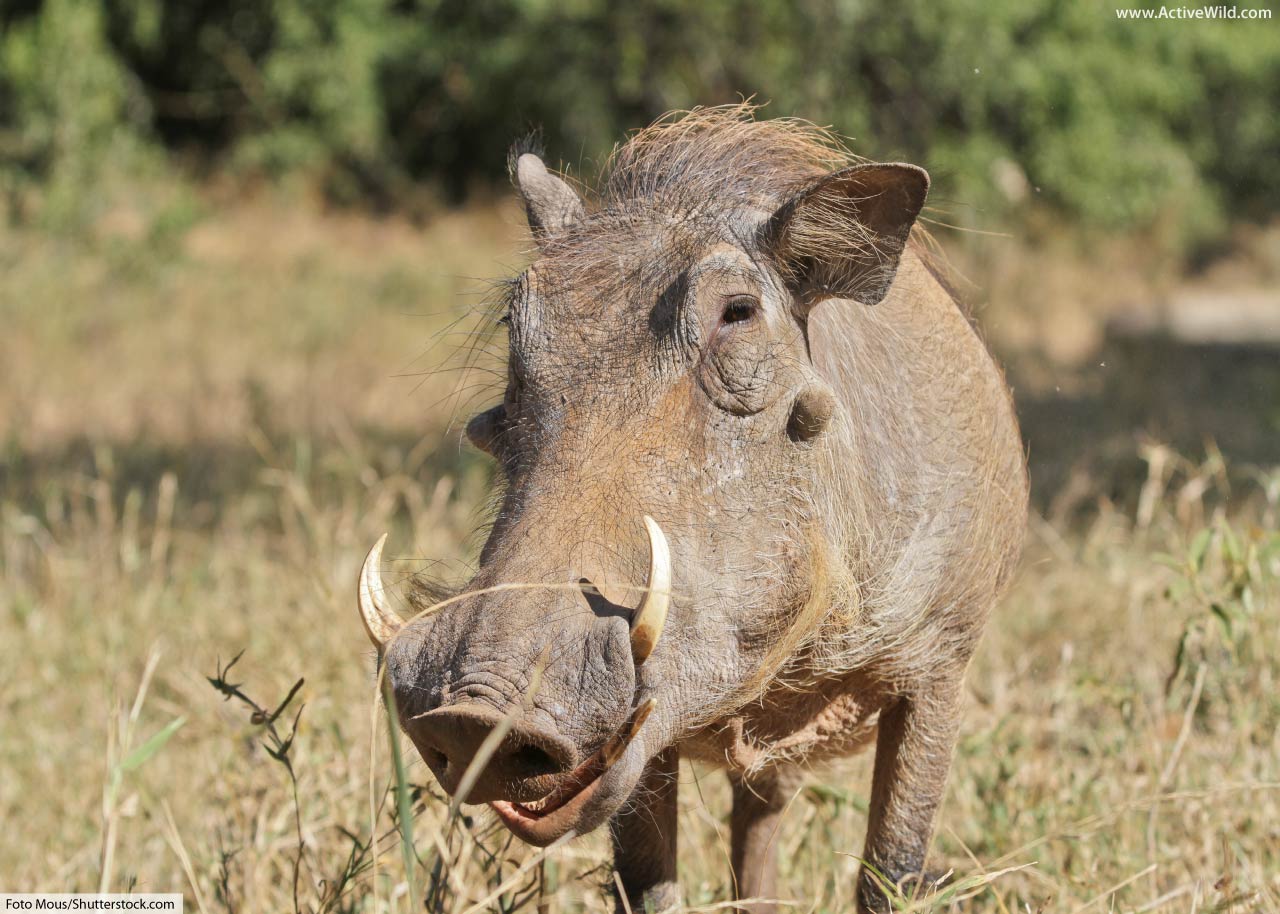 The common warthog is a member of the pig family found in Africa. With its distinctive tusks and warty face it is one of the best-known African animals. On this page you’ll find common warthog facts, pictures and in-depth information. Read on to get the lowdown on this awesome African mammal…


Common Warthog Facts At A Glance

The common warthog is a medium-sized wild pig. It is one of two species of warthog, the other being the desert warthog.

The common warthog gets its name from the three prominent warts that protrude from either side of its large, shovel-shaped head. The largest warts are located near the eyes. They can be as long as 15 cm (5.9 in) in mature males.

The color of the common warthog ranges from brown to black. The hair is sparse except for the tuft at the tip of the long tail and the mane that runs along the middle of the back.

Boars (males) are generally about 15 to 20% heavier than the sows (females). 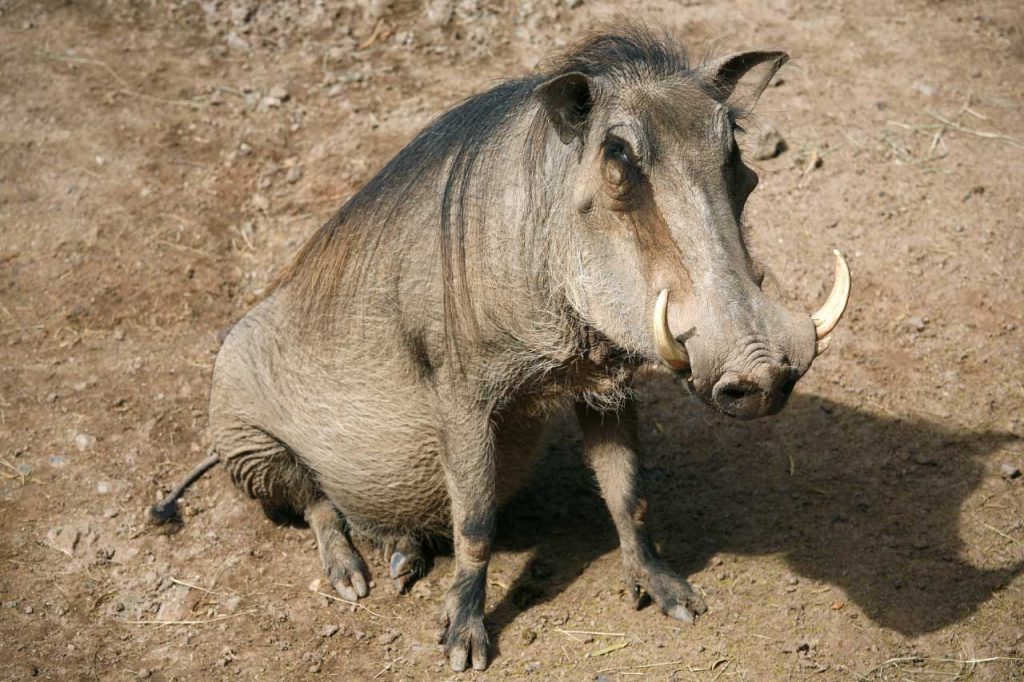 The common warthog has two pairs of upward-curving tusks. The tusks are elongated canine teeth. One pair grows from the upper jaw, the other from the lower jaw.

The much shorter lower pair can become extremely sharp as it rubs against the upper pair whenever the animal opens or closes its mouth.

The warthog’s tusks are used as protection against predators and to root around in the ground for food. Males use their tusks for fighting other males during the breeding season.

Where Is The Common Warthog Found?

The common warthog is found over a large area, with a range that covers most of sub-Saharan Africa. However, the species’ distribution is patchy, and the common warthog is not found in the Horn of Africa, the Congo Basin and the southern parts of the continent.

The common warthog inhabits grasslands, semi-deserts, scrublands (areas with woody bushes rather than trees) and open woodlands. The species usually avoids areas that are either densely vegetated or very arid (dry).

The species can be found from the sea level up to elevations of about 3,500 m (11,500 ft.) on the slopes of Mount Kilimanjaro (a dormant volcano located in Tanzania, in eastern Africa).

The common warthog is usually active during the day, but in some areas the species has adapted to the presence of humans by becoming active at night.

When not active, the warthog often rests inside a burrow. Although it can dig its own burrows it often uses those abandoned by other animals, including those made by aardvarks. The warthog enters its burrow backwards so that it can face the opening and flee quickly if necessary.

Female warthogs and their young live in groups known as soundings. Subadult male warthogs often live in bachelor groups, while mature boars live alone, only associating with other warthogs during the mating season.

The common warthog is not territorial and home ranges often overlap. However, both sexes use scent glands to mark areas where they sleep and feed.

The species regulates its temperature by wallowing in mud to cool down and by keeping close to other warthogs to stay warm. Sheltering in a burrow also protects the animal from extreme temperatures.

The common warthog is a seasonal breeder (i.e. it only mates during a certain time of the year).

The boars have two main mating strategies: they either remain near selected females, defending them from other males, or they roam around looking for females that are ready to mate (sows signal this by urinating frequently) and then fight any competing males for mating rights.

When fighting, boars use their heads and blunt upper tusks to push and strike at their opponent, but injuries are rare.

The gestation period lasts between 5 and 6 months. The sow leaves her sounding before giving birth in a burrow to a litter of 1 to 8 piglets. The piglets remain inside the burrow for the first 6 or 7 weeks of their life and are nursed by their mother for around 6 months.

Diet: What Do Common Warthogs Eat?

The common warthog is an omnivore. In addition to grasses (which make up a large proportion of its diet), the species feeds on berries and other fruits, tree bark, roots, bulbs and tubers, mushrooms, eggs, earthworms and insects.

Occasionally, common warthogs also consume carrion, dirt and even dung (their own and that of large herbivores) for additional nutrients.

During droughts, the warthog obtains all the water it needs from the bulbs and stems that it eats and is able to go several months without drinking.

The common warthog is an efficient digger, using its snout, tusks and feet to expose roots and tubers. The animal’s wrist joints are padded, allowing it to lower itself close to the ground to graze comfortably.

Lions are the main predator of the common warthog. The warthog also falls prey to cheetahs, leopards, hyenas, African wild dogs and crocodiles. Young piglets are vulnerable to predation by birds of prey.

The common warthog’s main strategy to avoid predators is to flee, and the animal will raise its tail as it runs in order to alert others of the danger. The warthog may also charge at a predator, using its tusks for defense. Sows are known to be highly aggressive when defending their young.

Is The Common Warthog Endangered?

The common warthog is rated ‘Least Concern’ by the IUCN.

The species is distributed over a wide area and is abundant in many parts of its range. It is also found in a number of protected areas.

The common warthog is also able to reproduce at a fast rate and even appears to be expanding its range in South Africa.

Despite this, the species’ overall population is declining. Reasons for this include overhunting, habitat loss, competition with livestock and droughts.