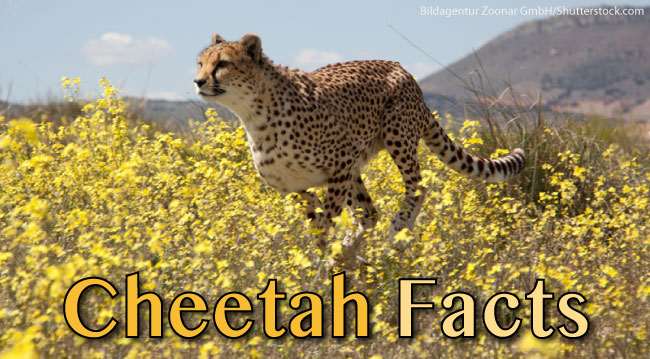 This page contains cheetah facts for kids (and adults). The cheetah is famous for being the world’s fastest land animal. This record-breaking cat can reach speeds of up to 75 mph (121km/h) in pursuit of its fast-moving antelope prey.

This page is part of our African Animals series.

The cheetah is one of Africa’s most famous animals. Most people in the world are able to identify this elegant, long legged cat with its golden, spotted coat.

The cheetah’s Latin name is Acinonyx jubatus. It is one of the larger members of the felidae (cat) family. However, as we’ll see further down the page, the cheetah isn’t usually included as one of the ‘big cats’.

The felidae family contains two subfamilies: Pantherinae, which comprises the tiger, lion, jaguar, leopard, snow leopard and clouded leopard; and Felinae, which includes all of the other cats, including the Cheetah.

Where Do Cheetahs Live?

Most of the world’s cheetahs live in Africa. A very small number of the rare Asiatic cheetah subspecies lives in Iran.

The cheetah is usually found in open areas such as semi-desert, prairie, grassland and savanna. However, they are also occasionally found in areas of dense vegetation and in mountainous regions.

The cheetah has rather coarse, short fur. The coat is pale gold-brown in color, fading to white on the animal’s undersides. The cheetah’s back, sides and legs are covered with around 2,000 solid black spots.

The spots are round, and between 2 and 3 cm (0.8 – 1.2 in.) in diameter. The tail also has these spots, but towards the end they merge together to become rings.

At the very end of the tail is a bushy, white tuft. Cheetah cubs use this to keep track of their mother’s position when they are in long grass.

Cheetahs have distinctive black “tear marks” running from the corner of their eyes down the sides of the nose to their mouth. Scientists think these may help to keep sunlight out of the cheetah’s eyes. 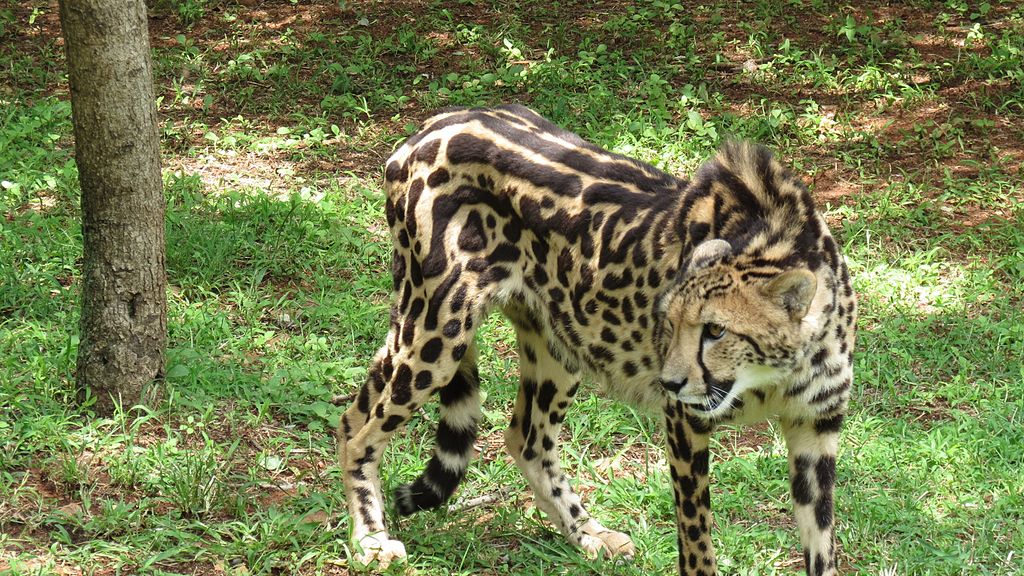 Occasionally, cheetahs are born with a mutation that causes their spots to merge together, forming patches on their sides and three stripes along their backs and tails.

Cheetahs with this color variation are known as ‘king cheetahs’. They are extremely rare.

Is The Cheetah A Big Cat?

The term ‘big cat’ isn’t a scientific term. It is used informally to describe members of the Panthera genus that can roar.

The five animals belonging to the Panthera genus are the tiger, lion, jaguar, leopard, and snow leopard. Because the snow leopard cannot roar, it is often excluded from the big cats group.

However, the definition of a big cat is often widened to describe any big, potentially dangerous felid. (A ‘felid’ is a member of the felidae family.)

Using this wider definition, the cheetah is a big cat, as are the clouded leopard, snow leopard and cougar.

How Fast Is A Cheetah?

The cheetah’s acceleration is equally as impressive. It can reach 62 mph (100 km/h) from a standstill in only three seconds.

Watch the video below to see incredible footage of a cheetah running: it’s an amazing sight!

What Does A Cheetah Eat?

The cheetah uses its speed and acceleration, along with its remarkable agility, to catch its prey. A cheetah’s diet mainly comprises various species of antelope, wildebeest calves, hares, birds and wart-hogs.

The cheetah has several adaptations to help it run fast. During a chase, its respiration rate increases from 60 to 150 breaths per minute. It has a large heart and lungs, and its large nostrils allow it to breathe extremely rapidly.

A cheetah’s claws cannot be fully retracted; this helps it to accelerate and to turn sharp corners at high speeds.

The cheetah’s long tail moves from side to side to provide balance as the animal makes fast turns.

Cheetahs are typically solitary animals. Males will form small groups, which are often made up of brothers from the same litter. These groups are called ‘coalitions’.

Although territorial, males are seldom aggressive towards each other. During the breeding season, however, all of this changes, and fighting for mating rights has led to fatalities.

Females live alone, and remain so even when they are raising cubs.

Cheetahs have a gestation period of about 94 days. They usually give birth to 4 cubs, although there can be as many as 9. The cubs already have their spots when they are born, which is unusual for cats.

Cheetah cubs are also born with a short, upright mane which is gradually shed as the cub gets older.

Cheetahs live for up to 12 years in the wild, and up to 20 years in captivity.

Cheetahs are fairly large animals, and don’t have many natural predators. However, cheetah cubs often fall prey to other big cats, and also to animals such as hyenas and African wild dogs.

Another problem cheetahs face is that their prey is often taken from them by other animals. Cheetahs will often give up their prey rather than risk injury fighting for it. If a cheetah cannot run due to an injury picked up in a fight, then it will die of starvation.

In the past, cheetahs have been hunted for their fur. Even today, some people tame them and keep them as pets or for recreational hunting other animals.

The cheetah’s conservation status is ‘vulnerable‘. It is thought there are only around 6,700 cheetahs living in the wild. A small population (around 80 adults) of the critically endangered Asiatic cheetah subspecies lives in Iran.

We hope that you’ve enjoyed learning about the amazing cheetah. You can find out about many other incredible African animals here: African Animals.