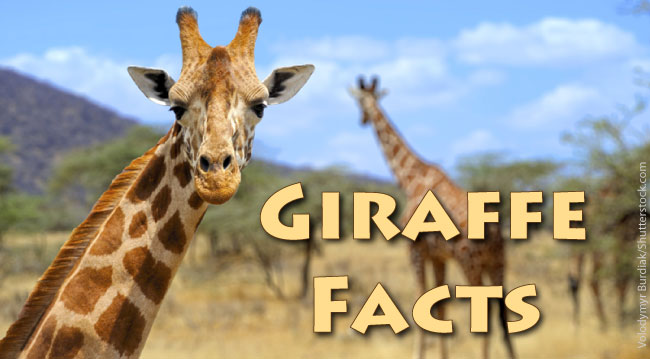 This page contains giraffe facts for kids (and adults). With their distinctive long necks and legs, giraffes are the tallest land animals in the world. They grace the African savannah with their unique beauty and peaceful, social demeanor. Let us explore the height, appetite, and life of this gentle giant. Read on for more interesting facts about giraffes…

Where Do Giraffes Live?

Giraffes are native to Africa, and are found between Chad and South Africa. They live wherever acacia trees are in abundance, and spend much of their time feasting on the leaves of this tree. Giraffes eat about 100 lbs of greens every day.

Giraffes use their 21-inch long tongues to wrap around the leaves, pulling them from the tree. Because the leaves contain so much water, giraffes only need to drink water from the watering hole once every several days. This is a good thing, because when the giraffe stoops to drink water, they put themselves in a compromising position with their spread-out legs, making them a target for predators such as the crocodile.

How Tall Are Giraffes?

Giraffes range in size from 16-18 feet tall. They weigh between 1,600lbs and 3,000lbs, with the males weighing almost 1,000lbs more than the females. Their necks and legs are both around six feet long, the height of a tall man. With their long legs, they are able to run up to 35 miles per hour. In fact, the name giraffe means “fast walker.”

On top of their heads are two horns, called ossicones, which are made of cartilage. One way you can tell the difference between a female and male giraffe (besides their size) is that the female’s ossicones will be covered with hair, while the male’s ossicones are bare. The males use their ossicones to spar with one another; they also fight with each other by “necking” when they swing their heads at each other and tangle their necks together.

No two giraffes have the same markings, although those found in the same region will have a similar appearance. With their leopard-like markings and the small hump on their backs, giraffes used to be called camel-leopards, which is why they are of the species Camelopardalis. Their coloring varies from tan to yellow to white, with reddish to chestnut-brown spots.

Giraffes are not territorial, although they live in groups (called a “tower”) of 12-15 giraffes, with an older male (bull) leading them. The females (cows) carry one baby at a time for 15 months before giving birth. When the calf is born to the standing mother, it falls nearly five feet to the ground- ouch! Recovering quickly, they are up and walking within the first hour, running after ten hours. These “babies” are nearly six feet tall at birth, weighing 100-150lbs.

Those first weeks are a dangerous time for the new calf and its mother. She keeps her baby away from the tower in a nursery group with other calves, shielding him from predators. Only about half of newborn giraffes survive, though. At three to six years, they reach maturity, and they can live as long as 25 years.

Giraffes have several adaptations, here are five of the most interesting:

One of the tallest subspecies of giraffes, the Rothschild Giraffe (named after Lord Walter Rothschild), stands nearly 20 feet tall and weighs up to 2500 pounds. Rothschild Giraffes are primarily found in one of two wildlife refuges in the Lake Baringo region of Kenya, which is why they are referred to as the Baringo Giraffe. However, they are also seen in the eastern part of Uganda.

Rothschild giraffes live in a variety of habitats, including wooded areas and along the Sahara Desert.

Unfortunately, they are in danger of extinction. Due to the extreme poaching habits of hunters in Kenya, there are only 670 left in the wild today.

The Rothschild giraffe has several distinctive features that separate it from the other species. To begin, they can have up to five horns, instead of the customary two. An additional horn can be found in the center of their head with two more behind it. Also, their markings are different from other subspecies of giraffes; they are similar to that of a leopard, in beautiful orange and brown markings. They have dark patches on a white background. These markings stop at the top of their legs, turning into increasingly spread out speckles that end in pure white at the knee or below. Finally, the males and females live separately unless they are mating.

We hope that you have enjoyed these giraffe facts for kids. You can discover more amazing African animals on this page: African Animals List with Pictures and Facts