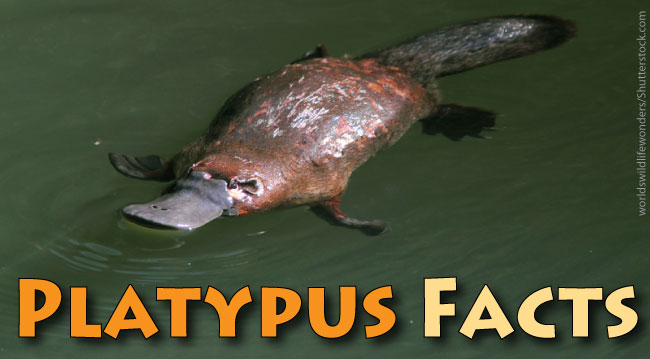 You may have heard of the platypus, but did you know that this strange-looking Australian animal is venomous? This incredible mammal is truly unique and has several other unusual characteristics; we’ll find out about these further down the page. This article contains platypus information and pictures, plus a list of platypus facts for kids.

Oh, there’s also an awesome video for you to watch!

This page is part of our Australian Animals series.

If you enjoy finding out about the Platypus, feel free to share this article on social media using the buttons above!

The platypus (scientific name Ornithorhynchus anatinus) is a highly unusual animal. Not only is it venomous, but it is also a member of a group of curious mammals called the monotremes.

Rather than giving birth to live young like other mammals, monotremes lay eggs!

There are only five species of monotreme: the platypus, and four species of Echidna. (You can read about Echidnas here: Echidna Facts)

The platypus is found along the eastern side of mainland Australia and in Tasmania. It lives near freshwater streams and rivers and is highly adapted for its semi-aquatic lifestyle.

As we’ll see further down the page, it has a useful trick up its sleeve for locating food.

At first glance the Platypus looks like a strange mixture of several different animals: it has the webbed feet and brown coat of an otter, the flattened tail of a beaver, and the large bill of a duck.

The large bill gives rise to the animal’s other common name: the duck-billed platypus.

The platypus’s bizarre appearance caused much confusion among early naturalists. In 1799, Dr George Shaw, a keeper at the British Museum, was presented with a dried platypus skin. The animal’s appearance was so unusual that Dr Shaw was suspicious that the museum had fallen victim to an elaborate hoax.

Believing that someone had joined a duck’s bill to another animal’s body, he used scissors to try to separate the parts. The marks his scissors left on the skin can still be seen today!

The Platypus’s body and tail are covered with dense, waterproof fur. This traps a layer of warm, insulating air close to the animal’s body.

The platypus’s legs are attached to the sides of its body, rather than underneath. This gives the animal a reptile-like gait.

When walking on land, the platypus walks on the knuckles of its front feet to protect the webbing between its toes. There is less webbing on the hind feet.

How Big Is A Platypus?

The platypus’s weight varies considerably from individual to individual, ranging between 0.7 and 2.4 kg (1.5 and 5.5 lb).

The platypus is one of the very few mammals that are venomous.

The male platypus has spurs on each ankle that can deliver venom powerful enough to kill small animals such as dogs. While not lethal to humans, the venom can cause excruciating pain.

Female platypuses are also born with spurs, but they drop off within the first year of life and are not venomous.

The male’s venom production rises during the breeding season, suggesting that it is primarily used as a weapon by rival males to establish dominance.

What Does A Platypus Eat?

The platypus is a carnivore, and eats worms, insect larvae, freshwater shrimps and crayfish, all of which are found in its freshwater habitat.

The platypus hunts underwater, using its cheek-pouches to carry prey to the surface before eating.

The platypus needs to consume around 20% of its body weight in food each day. This means that it spends an average of 12 hours per day looking for food.

Perhaps you thought that, what with the egg-laying and venom production, the platypus was already quite strange enough? Well, it doesn’t end there …

When underwater, the platypus closes the grooves containing its eyes and ears. This means that it is blind and deaf while hunting. So how does it find its food?

Incredibly, the platypus uses electrolocation to locate the small creatures on which it feeds. Its bill contains sensors that can detect the tiny electrical fields generated by the muscular contractions of its prey.

When the platypus is hunting, it moves its head from side to side, allowing it to detect where its prey is hiding.

In the video below, you can see how the platypus uses electroreception to hunt.

The platypus builds resting and nesting burrows in the banks of the rivers. The male has a home range of up to 4.3 miles (7 km). This may overlap that of 3 or 4 females.

The platypus is usually either nocturnal (active at night), or crepuscular (active at dawn and dusk). However, it is occasionally seen during the day.

The platypus, despite its venomous spines, has several natural predators. These include snakes, water rats, goannas, hawks, owls, eagles and crocodiles.

In captivity, platypuses have lived to 17 years of age. In the wild, individuals have been recaptured when they are 11 years old.

You can see incredible footage of a baby platypus emerging from its egg in the video below:

Is The Platypus Endangered?

The platypus has a large range and population size. However, its numbers are declining, and in 2016 it was classified as being ‘Near Threatened‘ in the IUCN Red List.

This is mainly due to urban and agricultural development, which causes habitat loss and population fragmentation.

The platypus is also vulnerable to the effects of pollution.

Platypuses were hunted for their fur until the early 20th century, a practice which is now illegal.

There have been attempts at captive breeding programs. However, these have had only limited success.

We hope that you have enjoyed these platypus facts for kids. Click here to find out about more Australian animals.

Australia has many incredible bird species. Find out about many of them here: List of Australian Birds.

You can find out about platypus conservation at the Australian Platypus Conservancy.

It’s absolutely free, you can unsubscribe at any time, and we’ll never share information with anyone else. Click here for info: Subscribe to Active Wild. A must for all animal fans!