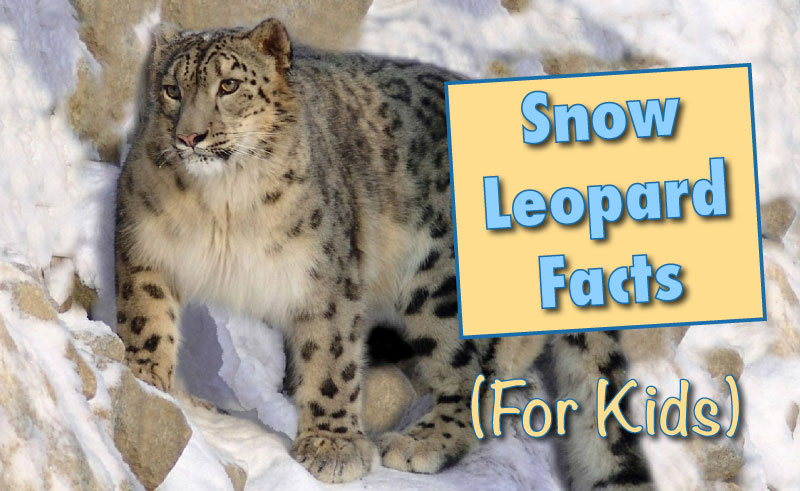 Snow Leopards are big cats that live in central and south Asia. These beautiful animals are endangered due to habitat loss and hunting. This page contains information, pictures and a list of snow leopard facts for kids.

Despite their name, snow leopards are more closely related to tigers than leopards. Unlike their African cousins, they have evolved to live in colder parts of the world. Snow leopards are also occasionally called ‘ounces’.

Where Do Snow Leopards Live?

Snow leopards live in and around the mountains of central Asia, in countries such as Russia, Mongolia, Kazakhstan, Uzbekistan, India, Nepal and Bhutan.

Smallest Of The Big Cats

Snow leopards are physically the smallest members of the group of animals known as the ‘big cats’. (This group also includes lions, tigers, leopards and jaguars.) However, snow leopards are still fairly big animals, weighing around 25-55+ kg (60-120+ lbs). Their bodies (including their tails) are between 6 and 7.5 feet long.

Snow leopards’ tails are longer, in proportion to body size, than those of most other cats. This may help to provide them with better balance for walking in rocky environments.

The most obvious difference between snow leopards and other big cats is their colour. Snow leopards have smoky-grey coloured fur, which provides camouflage in rocky, snow-covered habitat. The snow leopard’s spots – known as rosettes – help it to blend in with the rocks on the slopes of the mountains.

Snow leopards also have a number of other adaptations for living in the mountains. Whereas most big cats have yellow eyes, snow leopards have light green or grey eyes. This helps them to blend into their environment.

Snow leopards have thick fur. Their tails, which are not only long, but also thick, are used to protect their faces from the cold when the animal is resting. Snow leopards have wide paws, which allow them to walk on snow without sinking into it. The undersides of the paws are furry, to aid grip and to provide protection against the cold. Snow leopards’ nasal cavities are large, to warm up the cold air.

Watch the video below to see for yourself how well camouflaged snow leopards are!

Snow leopards occasionally prey on domestic livestock. This can cause farmers to hunt snow leopards in order to protect their livelihoods.

Why Are Snow Leopards Endangered?

The main reason snow leopards are endangered is habitat loss. More and more of its habitat is being developed into farmland. When this happens, the snow leopard loses not only its home, but also its food – it can no longer find enough animals to eat. Snow leopards are also hunted for their fur and their bones.

There are only about 6,000 snow leopards left in their natural habitat, and this number is decreasing. Today there are more snow leopards living in captivity than in the wild.

There are several charities that have been set up to help snow leopards, one of which is the Snow Leopard Trust.