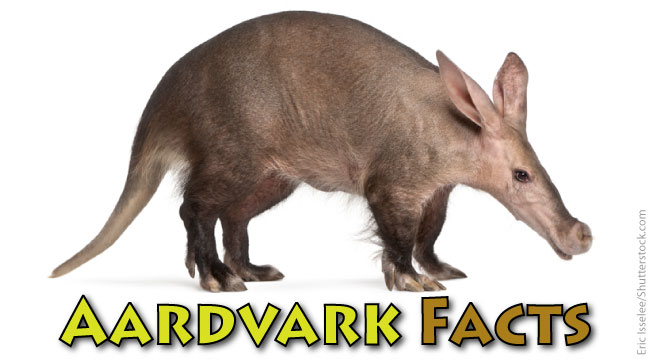 This page contains aardvark facts and information and is part of our African Animals series. Be sure to watch the video of an Aardvark in action!

Want to learn about a reclusive nocturnal creature that can literally dig its way out of danger? Let’s meet the Aardvark!

The aardvark is a nocturnal African mammal. This curious looking creature looks like a mixture of several other animals. Its snout is long and pig-like, it has long ‘rabbity’ ears and a thick tail like a kangaroo’s.

One look at the aardvark’s strong, powerful feet, with their spade-like claws, will tell you that this animal is an expert at digging. Aardvarks dig large burrows in which they live and bring up their young. They also use their digging skills to catch ants and termites.

The aardvark is a mammal, which means that (among other things) it has hair and feeds milk to its young.

The aardvark’s name ensures that it usually comes first in animal encyclopaedias! The name actually comes from an Afrikaans word which means ‘ground pig’. (Afrikaans is a language spoken in South Africa.)

Aardvark Facts: Where Do Aardvarks Live?

You can find aardvarks living across most parts of Africa south of the Sahara Desert (this area is known as ‘sub-Saharan’ Africa). Their favoured habitats are savannahs, grasslands and wooded areas.

Aardvarks’ burrows are deep and can be over ten metres long. They often have several entrances. Aardvarks play an important role in the African ecosystem because abandoned aardvark burrows are used by many other types of African animal, both as homes and as shelters from wildfires.

The aardvark is a formivore (ant-eating animal), and mainly eats termites and ants. The aardvark digs into a termite mound before using its long, sticky tongue to bring out the insects. Aardvarks are known to eat several thousand termites in one night.

Aardvarks are omnivores, and also eat grasses and roots. The only fruit an aardvark eats is actually named after it: the aardvark cucumber. The aardvark helps this plant by distributing its seeds after eating it.

Watch the video below to see the aardvark in its natural environment.

The aardvark’s main predators are large carnivores such as lions, hyenas, leopards, and even pythons.

The aardvark has several adaptations and defence strategies to keep it safe. Its chief means of defence is its thick, tough skin, which offers some protection against predators, and also means it can’t get bitten by the insects it eats.

The aardvark has a good sense of hearing that allows it to hear predators coming from a long way away.

If threatened, aardvarks are capable of digging small burrows very quickly to escape from predators.

Aardvarks will also escape from predators by fleeing in a zigzag direction, and as a last resort will use their sharp claws or strong tail to defend themselves.

Aardvarks are rated as ‘Least Concern’ on the IUCN Red List, which means that they are not in any immediate danger. However, aardvarks are shy animals and are seldom seen, so it is difficult to know just how many of them there are.

We hope that you have enjoyed reading these aardvark facts. You can find out about many more amazing animals on our African Animals page.