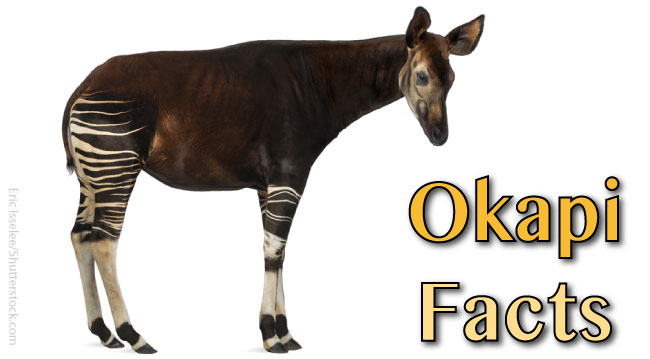 This article contains Okapi facts and is part of our African Animals series.

The Okapi is an elusive animal that inhabits the rainforests of central Africa. Easily recognisable by its zebra-like markings, the okapi is actually more closely related to the giraffe.

Be sure to watch the video to see this incredible animal in its natural environment.

Let’s find out more about this rarely seen creature.

The scientific name for an okapi is ‘Okapia johnstoni’. The species was first identified (recognised as being a new species) in 1901. The name ‘okapi’ comes from the native word for the animal, ‘o’api’.

The second part of the okapi’s scientific name comes from Sir Harry H. Johnston, a British explorer and botanist. He confirmed the existence of the okapi and acquired okapi skull and skin specimens. This allowed scientists to identify the okapi as a new species.

Okapis are closely related to giraffes. Although the two species look very different, they do share certain characteristics, having similar tongues, teeth, and horns. Okapis have long necks (although not nearly as long a giraffe’s) for reaching foliage in trees and tall bushes.

The Okapi is a fairly large mammal. It stands around 1.5m (5 feet) tall at the shoulders and its body is around 2.5m (8 feet) in length. It is similar in shape to a horse, but has a longer neck. Female okapis are slightly taller and heavier than the males.

Okapis have small heads and big ears. Okapis have finely tuned senses, so if you’re looking for an okapi, it probably already knows you’re coming!

If you do manage to see one, the first thing you’ll notice about an okapi are the striking colours of its coat. Its hind quarters and front legs have black and white ‘zebra’ stripes. The rest of its body is a deep plum red colour, apart from its white face.

When scientists first saw native hunters wearing okapi skins, they thought that they were from a new species of zebra.

Out of its natural habitat, the okapi doesn’t look like a creature that likes to stay out of the limelight.

However, in a rainforest environment, the okapi’s stripes allow it to blend in with the rays of light that filter through the trees. The okapi’s contrasting colours break up its shape. If a predator is looking for prey that is typically mammal-shaped, then it might not notice an okapi hiding in the undergrowth.

The okapi’s long neck allows it to reach foliage in trees and tall bushes. Like giraffes, okapis have skin-covered horns called ossicones. However, unlike giraffes, only male Okapis have ossicones. Some females have knobbly bumps in their place.

The okapi’s long, black tongue is prehensile (able to grip). It is used to pull food down to the animal’s mouth.

Okapi Facts: Where Do Okapis Live?

The Democratic Republic of the Congo (DRC) is a large country – the second largest in Africa – and is located in the centre of the continent. It is said to be the most biologically diverse country in Africa.

Most okapis live in the northern regions of the country. The Ituri Forest, in northeastern DRC, is home to a large part of the world’s okapi population. The Okapi Wildlife Reserve forms one fifth of the Ituri forest.

The video below shows an okapi in the Okapi Wildlife Reserve.

Okapis live in areas of tropical rainforest. They are reclusive animals, and prefer areas of thick forest. Okapis avoid areas populated by humans.

Okapis are herbivores (plant eaters). They eat a variety of trees, grasses, fungi and fruits. They are diurnal (active during the day).

Okapis live solitary lives, and only get together to mate. They don’t make many noises They have scent glands on the bottoms of their feet and a good sense of smell, so they can tell if other okapis are in the area.

It is thought that there are around 25,000 okapis living in the wild. This may seem like a large number, but considering that the Democratic Republic of the Congo is a big country, you’d be very unlikely to see one if you went there!

Okapis are hunted for their meat and skins, and like many endangered animals, are also threatened by deforestation. In 2012, poachers attacked staff and animals at the Okapi Wildlife Reserve.

Okapis are classified as ‘Endangered’ by the International Union for the Conservation of Nature and Natural Resources (IUCN).

The Okapi Conservation Project was set up to protect the okapi.

The okapi’s main natural predator is the leopard.

You can discover more African animals on this page: African Animals List with Pictures & Facts