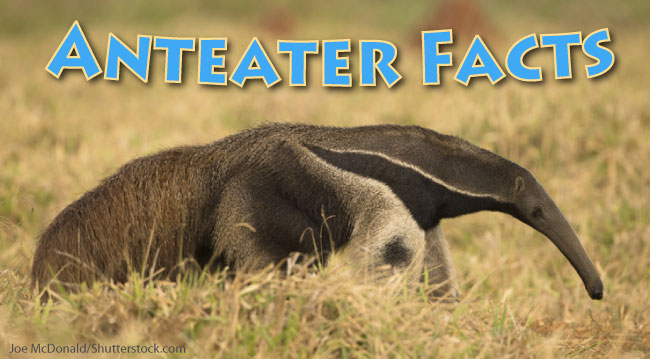 Anteaters are small-to-medium-sized mammals that live in Central and South America. There are four species of anteater. As you may have guessed, their diet consists mainly of ants and similar insects. This page contains anteater facts and information. It is part of our Rainforest Animals series of articles. If you don’t know what an insectivore is, you soon will do!

You guessed it: an ‘insectivore’ is an animal that eats insects.

Anteaters are insectivores. Their diet consists almost entirely of ants and termites (termites are ant-like insects).

The silky anteater, northern tamandua, and southern tamandua are ‘arboreal’, which means they live in trees. They have prehensile tails that can grip onto branches to help them climb.

The northern and southern tamanduas also spend some time on the gound.

The giant anteater spends most of its time on the ground, and lives in grasslands as well as in forests.

You can find out more about the four species further down the page.

Anteaters are found–together with sloths–in the order (a group of animals) called Pilosa.

All four anteater species are in the suborder (a smaller group of animals) called Vermilingua, which means ‘worm tongue’.

Anteaters don’t have very good eyesight, so they use their acute sense of smell to locate food.

Anteaters don’t move very fast, and tend to shuffle along, with their long claws curled up under their feet. They are also surprisingly good swimmers and use their long snouts like snorkels!

See a giant anteater in action in the video below:

Anteaters are ‘endentate’ – which is a scientific way of saying that they don’t have any teeth! Ants aren’t particularly big or crunchy, so lack of teeth is no problem for the anteater. The insects are crushed up in the anteater’s specially hardened stomach.

Anteaters have long tongues that they use to gather up lots of insects at the same time. An anteater flicks its tongue at around 160 times per minute while eating!

Anteaters have to eat quickly because the insects defend themselves with bites and stings. Anteaters usually feed for around a minute before moving off to find another food source.

This also allows the insects to rebuild their nests. Anteaters are careful not to destroy the nest entirely. This means that they can come back another day to eat there again!

Anteaters also have sharp claws which enable them to break open an anthill before using their long tongues to mop up the ants.

Only Fierce When Cornered

Anteaters aren’t aggressive creatures, but giant anteaters in particular can be fierce when cornered. Anteaters have quite a few predators in their rainforest habitats, including jaguars and cougars.

When threatened, the anteater will stand on its back legs and strike out with its front legs. Anteaters have long, sharp claws, and giant anteaters have been known to see off big cats and other predators.

There are 4 different types of anteater:

The silky anteater has yellow fur, and is about the size of a large squirrel. It is arboreal.

The northern tamandua and southern tamandua are both around 1.2m (3 ft 11 in) long. They look largely similar, with yellow heads, legs and tails, and black ‘waistcoats’ around their bodies.

You can tell the difference between the two species by looking at their ears: those of the southern tamandua are slightly longer.

The southern tamandua is also known as the ‘collared anteater’ or the ‘lesser anteater’.

The giant anteater is the biggest species of anteater and is around 2.1 metres (7ft) long. It has a long, thin nose and a black, grey and white coat.

The giant anteater is considered to be the most threatened mammal in Central America. It is classed as being ‘Vulnerable’ on the IUCN Red List. Numbers of wild giant anteaters are decreasing.

We hope that you have enjoyed learning these anteater facts. You can find out about more incredible animals at our rainforest animals page.