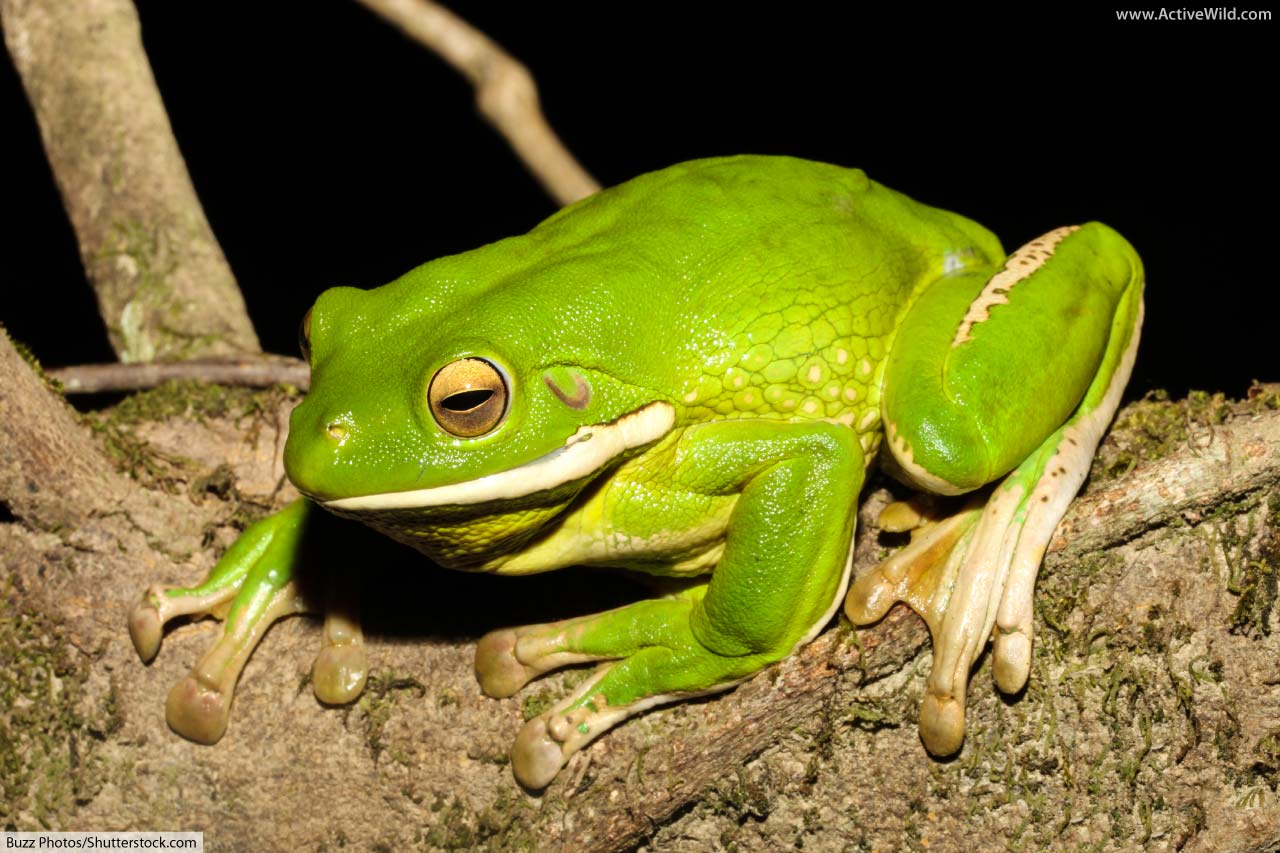 The white-lipped tree frog, with its distinctive white lower lip, is a relatively common amphibian found in Queensland, Australia (as well as on New Guinea and other islands in the region). The species is also known as the Australian giant tree frog. On this page you’ll find white-lipped tree frog facts, pictures and information…

Before the introduction of the non-native cane toad, the white-lipped tree frog was the largest species of frog – and the largest amphibian – found in Australia.

The white-lipped tree frog is also known as the Australian giant tree frog and the giant tree frog. As a result of continued research, its scientific name has changed a number of times over the years. The species has previously been known as Nyctimystes infrafrenatus and Hyla infrafrenata.

(Another identification tip is that White’s tree frog has a larger and more noticeable ‘supratympanal ridge’ (a fold of skin above the eardrum) than the white-lipped tree frog).

The white-lipped tree frog gets its English name from the white stripe that runs around its lower jaw and which extends to the top of the shoulders. The species’ hind legs can also be marked with a white stripe. This stripe can turn salmon pink in male frogs during the mating season.

The white-lipped tree frog is typically bright green, although its coloration is influenced both by temperature and by the surrounding environment. Because of this, the species’ colour can range from pale brown to greenish brown. The undersides are off-white.

The frog’s back, throat and limbs are relatively smooth, whereas the sides and belly have a grainy texture.

The toes of the hind feet are fully webbed. Those of the front feet (the frog’s ‘fingers’) are only partially webbed. All of the frog’s fingers and toes are equipped with large discs. These act like suction cups, allowing the frog to cling to and climb vertical surfaces.

The white-lipped tree frog has large, cream or light brown-coloured eyes. The pupils are horizontal. The tympanum (eardrum) is well defined and can clearly be seen behind each eye.

White-lipped tree frog tadpoles are dark brown in colour and have a cream stripe running along either side of the body.

Where Is The White-Lipped Tree Frog Found?

As well as being found in Australia, the white-lipped tree frog is found on New Guinea and many other smaller islands in the region, including the Bismarck Archipelago, the Maluku islands of Indonesia, Indonesian West Timor and East Timor.

In Australia, the tree frog is found in north-east Queensland. The species’ range includes coastal areas of the Cape York Peninsula north of Townsville.

The species is also able to tolerate heavily modified environments and may inhabit urban gardens and parks, roadsides, fields and agricultural land.

The white-lipped tree frog is usually found in coastal lowlands at elevations below 300 m (984 ft.), but can be found at much higher elevations.

The white-lipped tree frog is usually active in the evenings and at night. Activity tends to peak when the air is warm and humid.

The species spends most of its time in the trees. It usually only descends to the ground to mate.

The white-lipped tree frog has two distinct calls. The mating call of the male frog is a loud ‘wark, wark’ that resembles a large dog barking. The frog also emits a cat-like ‘meow’ sound when distressed.

The white-lipped tree frog mates during spring and summer. Mating can take place in both natural and artificial bodies of water, typical locations being forest pools, slow-moving rivers, ditches and garden ponds.

The male frogs descend from the trees to the breeding site, usually after a period of rainfall. After finding a perch in the vegetation about 3 to 4 m (10 to 13 ft.) above the ground, they begin to call in order to attract females.

The female lays a large clump containing hundreds of eggs into the water while the male clings to her back, fertilizing the eggs. The diameter of the eggs is roughly 3 mm (0.12 in).

After hatching, the tadpoles remain in the water until they have metamorphosed into frogs. (You can find out more about metamorphosis here: Amphibians: The Ultimate Guide)

This usually takes about 8 weeks, depending on conditions. After leaving the water, the young frogs climb into the trees.

What Do White-Lipped Tree Frogs Eat? 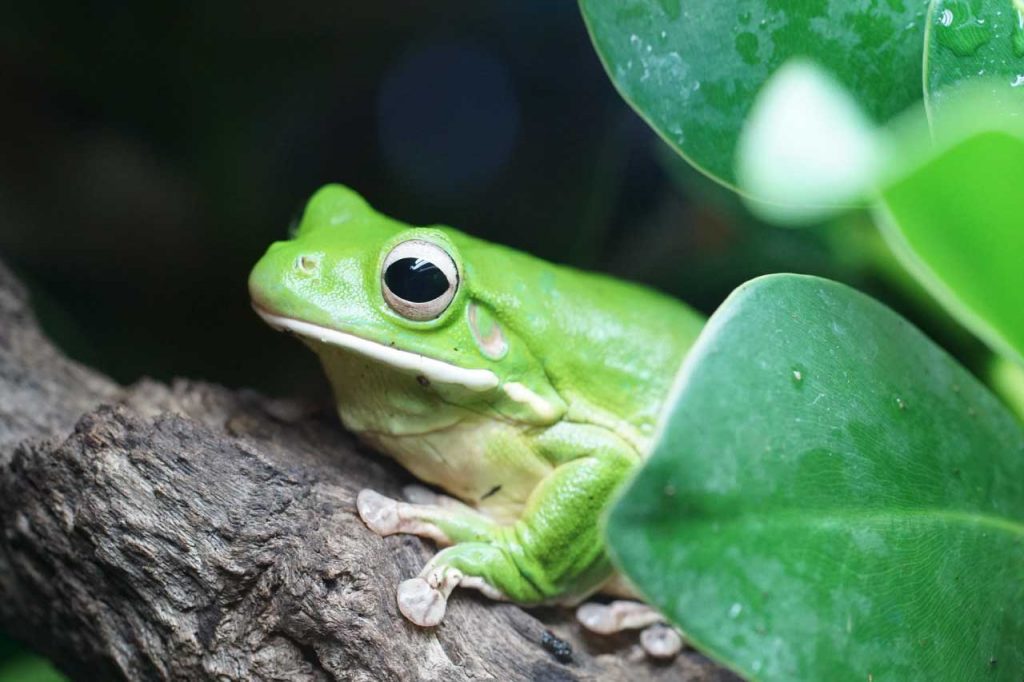 Like most frog species, the white-lipped tree frog is carnivorous as an adult and herbivorous as a tadpole. The frogs mainly eat insects but may also prey on other invertebrates.

The tadpoles are aquatic and feed on vegetation in the water. Their diet features various algae, aquatic plant species and other plant matter such as leaves that have fallen into the water.

Is The White-Lipped Tree Frog Endangered?

The white-lipped tree frog is rated ‘Least Concern’ by the IUCN.

The species is distributed over a wide area and fairly common throughout its range. This adaptable frog can live in a wide range of habitats, including urban environments. The total population is assumed to be large and no major declines have been recorded.

In Australia, loss of suitable habitat due to logging is a potential threat to the species. The frog is also captured from the wild for the commercial pet trade in Indonesia, although this is not believed to have a significant impact on its numbers.