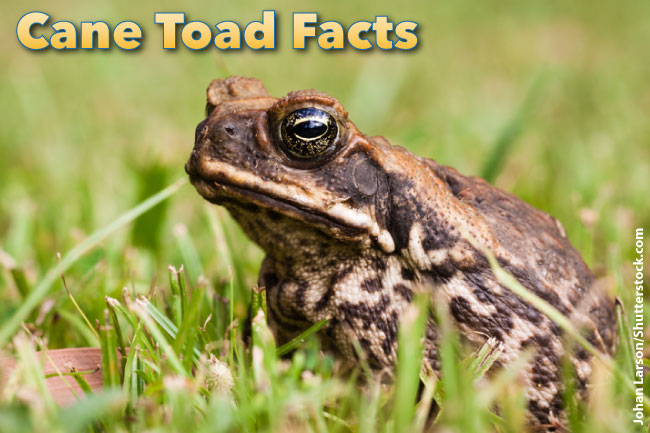 This page contains Cane Toad facts for kids and adults as is part of our Australian Animals series. This is one animal most Australians aren’t too fond of! Let’s find out why …

The Cane Toad is a bit of a troublemaker, and in many parts of the world is officially regarded as a pest. The Cane Toad is poisonous and can kill other animals that eat it.

The Cane Toad was first found in Central and South America, but is now found in several other places in the world, including Australia.

The Cane Toad was deliberately introduced to these other regions because it eats insects that feed on valuable crops.

However, the poisonous toad has had an extremely damaging effect on the local wildlife.

The Cane Toad is a member of the Bufonidae family. This family is known as the ‘True Toads’. All members of this family are poisonous, but not all produce poison as strong as the Cane Toad’s.

Watch the video below to see how big Cane Toads can grow!

Apart from its large size, the Cane Toad looks much like any other toad. Its skin is dry, and covered in wart-like bumps. It uses its powerful rear legs to hop around, and can move surprisingly quickly.

The Cane Toad has big, swollen lumps behind its ears. These are its parotoid glands. These glands produce a milky-white substance that is poisonous to many other species. (You can find out more about the Cane Toad’s poison further down the page.)

The Cane Toad is an amphibian, and like most amphibians undergoes a physical change known as metamorphosis. The Cane Toad hatches from an egg as a tadpole. It spends the first part of its life in water. As it matures, the tadpole grows arms and legs and gradually turns into a miniature toad. It can then leave the water and live on land.

The Cane Toad spends most of its life on land, and only goes to water to breed. Female Cane Toads lay their eggs in long strings of jelly. Between 8,000 and 25,000 eggs are laid at a time, in strings up to 20 metres long. It takes around a month for the tadpoles to turn into frogs.

The Cane Toad’s poison is present in its parotoid glands and throughout its skin. Cane toad poison affects the victim’s heart.

The toad is poisonous at all stages in its development: Cane Toad eggs and tadpoles are also potentially lethal to other animals.

Cane Toad poison rarely kills humans, but it can cause severe sickness and can also be extremely painful if it comes into contact with the skin and eyes.

In Central and South America many of the Cane Toad’s predators are unaffected by its poison. However, in other parts of the world – where the Cane Toad was introduced by humans – the local wildlife hasn’t evolved any defences against the toad. This has caused great damage to the local ecosystems.

Cane toads can spread extremely fast without any natural predators to limit their numbers.

In 1935, the first Cane Toads were released in Australia. It was hoped that the toads would control the numbers of Grey-Backed Cane Beetles and other insects that damaged sugar cane crops.

Only 3,000 Cane Toads were released; now there are over 200 million of the amphibians in the country.

Many schemes to stop the spread have been tried, with little success. These range from simply capturing the toads, to using biological means to control them.

Some Australians have found other uses for the amphibians: Cane Toad races are sometimes held! Watch the video below to see people enjoying this unusual pastime.

We hope that you have enjoyed learning about the Cane Toad. The spread of this amphibian and the damage it has caused to local wildlife should be a lesson to us all. You can learn about more amazing Australian wildlife at our main Australian Animals page.