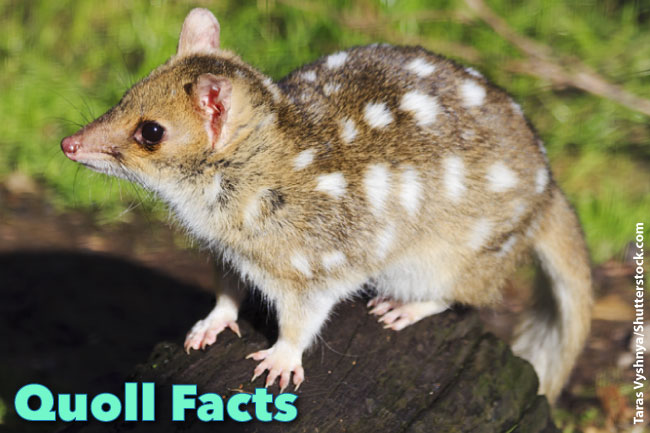 The Quoll is a carnivorous marsupial. It is easily recognised by its distinctive pale spots. The quoll is native to Australia and New Guinea. It is threatened by habitat loss and the spread of invasive species (in particular the Cane Toad). This page contains quoll facts for kids and adults, and is part of our Australian Animals series.

Read on to find out all about this sharp-toothed marsupial …

The quoll is around the size of a small cat. Its face is pointed, and its mouth is filled with sharp teeth. It has a moist, pink nose and bright eyes.

A quoll’s fur can range in colour from brown to black. Its coat is dotted with lighter patches. The spotted-tailed quoll is the only quoll species that also has spots on its tail.

The Quoll has ridges on the bottom of its feet to help it climb. It is unable to use its long tail to grip onto branches as monkeys do.

You can see an Eastern Quoll in the video below:

The Quoll is mainly nocturnal, and tends to stay in its den during the day.

Five of the six species are rated ‘Near Threatened’ on the IUCN Red List, and one is rated ‘Endangered’.

We’ll have a closer look at the 6 species of Quoll further down the page.

How Big Are Quolls?

Male Quolls are larger than females.

Marsupials are mammals that give birth to relatively undeveloped young. The young (called joeys) climb into their mother’s pouch immediately after being born. Here they continue to develop, while feeding on their mother’s milk, until they are ready to fend for themselves.

The only species of quoll to have a full pouch is the Tiger Quoll. The other species have folds of skin on their undersides which develop into a pouch during the breeding season.

Quolls give birth to more joeys than they can carry in their pouches, which can hold only six joeys. They other babies perish.

Quoll joeys spend around 2 months in their mother’s pouch. They are then carried around on her back for around 6 weeks. The young Quolls use their sharp teeth to cling on to their mother.

Quoll Facts For Kids: What Do Quolls Eat?

Quolls are threatened by the spread of poisonous Cane Toads in Australia.

Cane toads were deliberately introduced in Australia in 1935. Farmers hoped that the amphibians would control the number of Grey-Backed Cane Beetles damaging their crops.

The scheme was unsuccessful. There are now millions of Cane Toads in Australia, and they are spreading out from where they were originally introduced. Native predators such as the Quoll have no natural defences against the toad’s poison.

Sadly, Quolls are likely to be tempted by a nice juicy Cane Toad. Upon eating a Cane Toad, a Quoll will become very sick or die. Along with habitat loss, the Cane Toad is one of the main reasons that Quolls are becoming endangered.

Watch the video below to find out more about the effect Cane Toads have on Quolls.

You can find out more about Cane Toads here: Cane Toad Facts.

The Eastern Quoll is also known as an Eastern Native Cat. This medium-sized Quoll is now extinct in mainland Australia, but is widespread in Tasmania. Unlike all other Quolls, the Eastern Quoll only has four toes on its hind feet.

(Subspecies are very closely related species. Differences between them are minimal, and they usually live in different places.)

Little is known about the Quolls of New Guinea. The Bronze Quoll (Dasyurus spartacus) lives in the savanna and grasslands of southern New Guinea.

We hope that you have enjoyed learning about this fierce little marsupial. You can learn about more amazing Australian animals here: Australian Animals.