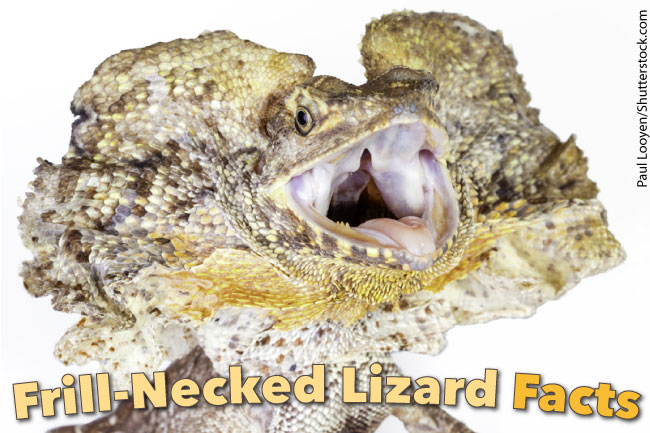 This page contains Frill-Necked Lizard facts for kids and adults, and is part of our Australian Animals series. Want to know what a Frill-Necked Lizard looks like, where it lives, what it eats … and what eats it? Read on to find out all of this and much more …

(Don’t forget to watch the video of a fierce Frill-Necked Lizard chasing a cameraman!)

Frill-Necked Lizards are also known as ‘Frilled Lizards’ and ‘Frilled Dragons’. These fierce-looking lizards are found in Northern Australia. They get their name from the frill of loose skin around their neck. When the lizard is alarmed or angry, it raises this frill. This makes the lizard look bigger than it actually is, and helps to scare off predators and rivals.

There are more lizards than any other type of reptile. Around 6,000 species of lizard have been discovered. Lizards are identifiable by their long bodies and tails, short legs, and scaly skin.

The scientific name for a Frill-Necked Lizard is Chlamydosaurus kingii. It is the only member of the Chlamydosaurus genus. (A genus is a group closely-related animals.)

Another well-known Agamid is the Bearded Dragon, which is a popular pet.

The Frill-Necked Lizard’s scaly skin is patterned, with patches of lighter and darker colours. Most have dark, plain colours. The lizard’s skin provides excellent camouflage against tree trunks and branches.

The most noticeable feature of the Frill-Necked Lizard’s appearance is its frill. This hangs loosely over the lizard’s back most of the time. However, when the lizard is agitated it raises its frill, making its head look much bigger. The lizard often hisses while doing so.

The frill is a lighter colour than the lizard’s body and is designed to startle predators. The frill is raised with lengths of cartilage (a soft, bone-like substance) attached to the lizard’s jaw bones.

You can see what a Frill-Necked Lizard looks like in the video below.

It is thought that the Frill-Necked Lizard’s frill is also used to control its body temperature.

Where Is The Frill-Necked Lizard Found?

The Frill-Necked Lizard likes a humid environment, and is found in the tropical rainforests and savannas of Australia and New Guinea. It is also found less frequently in desert environments further south in Australia.

The Frill-Necked Lizard is arboreal, which means that it lives in trees.

Frill-Necked Lizards only come down to bask in the sun, feed, and mate.

What Do Frill-Necked Lizards Eat?

Frill-Necked Lizards are carnivores (meat eaters), and feed on a variety of small animals such as insects (particularly butterflies and moths), mammals and other lizards.

A number of animals feed on Frill-Necked Lizards. Birds of prey, snakes, other lizards, dingoes and feral cats.

Frill-Necked Lizards are not endangered, but like many animals are threatened by habitat loss caused by farming and other human developments.

We hope that you have enjoyed learning about this awesome lizard. Visit the following pages to discover more about Australian animals and reptiles: