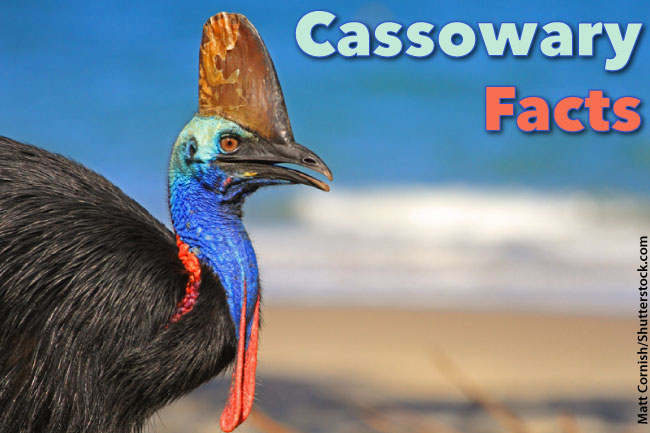 This article contains cassowary facts for kids and adults, and is part of our Australian Animals series.

On this page we’ll learn all about this large (and occasionally aggressive) flightless Australian bird.

Below are the 10 top Cassowary facts.

Cassowaries are large, flightless birds. Their bodies are covered with bushy black feathers that look like thick hair. Their legs are long and powerful, and their large feet are equipped with sharp claws.

Cassowaries are very distinctive birds. They are easily identified by bright blue and red colours of their heads and necks. They also have a large horn-like structure – called a casque – that grows from the top of their heads.

There are three species of Cassowary. The largest and most common of these is the Southern Cassowary.

* Strictly speaking, now that ostriches have been split into two different species, the Southern Cassowary is the third heaviest and fourth tallest bird.

Cassowaries are found in the rainforests of New Guinea and Australia. They are shy, solitary birds and are rarely seen in the wild.

The Southern Cassowary is the only Cassowary found in Australia.

Cassowaries are large, powerful birds, equipped with fearsome claws. When approached or cornered, cassowaries can act aggressively. Cassowaries have attacked – and even killed – humans in the past. However, this is extremely rare, and their bad reputation is largely undeserved.

When cassowaries attack they leap into the air, kicking out with their strong legs and slashing with their large claws.

See what a cassowary looks like – and how to deal with one if you meet one – in the video below!

Cassowary feet have three toes. Each toe has a claw, but the ones you need to watch out for are the dagger-shaped inner claws. These are the Cassowary’s main weapons, and can be up to 12.5 cm (5 in) long!

All Cassowaries have a helmet-like horn called a casque that grows on the top of their heads. There are several theories as to what the casque is for. Some scientists think that it helps the birds to push their way through the undergrowth. Others think that it gives the birds protection from falling fruit and branches. Another theory is that the casque is used to amplify the Cassowary’s low booming calls.

The Three Species Of Cassowary

There are three species of cassowary:

The Southern Cassowary grows up to 1.8 metres (5.9 feet) tall. It is also known as the Double-Wattled Cassowary on account of its two long red wattles.

The Northern Cassowary is found in northern New Guinea. It is only slightly smaller than the Southern Cassowary. It has a single, bright orange or red wattle.

See footage of a Northern Cassowary (taken in a zoo) below.

The Dwarf Cassowary may be the smallest cassowary, but it’s still very big for a bird. It grows up to 1.5 m (almost 5 feet) tall.

The Dwarf Cassowary is also slightly plainer than the other two Cassowary species. It has a blue neck, but lacks the colourful wattles of the Northern and Southern species.

The Dwarf Cassowary is found in New Guinea.

This rare forest bird is seldom seen. The photos in the video below were taken with a ‘camera trap’: a hidden camera deep in the forest that is triggered by heat and / or movement!

Cassowaries are forest birds. They are stocky and more heavily-built than emus and ostriches that live in deserts and grasslands.

Cassowaries are territorial, and spend much of their time alone. They only approach other cassowaries to breed.

Cassowaries hiss and whistle to communicate. They also produce loud booming calls. These are the lowest sounds made by any bird, and can barely be heard by humans. People say that the calls are so low and loud that it makes their insides feel strange!

It is thought that these booms may help cassowaries find each other in the forest. Some scientists believe that the Cassowary’s casque helps it to produce these booming sounds, and that dinosaurs with similar structures may have communicated with low booming calls in the same way.

What Do Cassowaries Eat?

Cassowaries are very beneficial to the ecosystem. They can spread seeds over one kilometre from where they were found in their droppings. The seeds of some plants have even been found to be more likely to germinate (sprout) after passing through a Cassowary!

Both the Northern and Southern Cassowary are rated Vulnerable on the IUCN Red List. Populations of both species are declining.