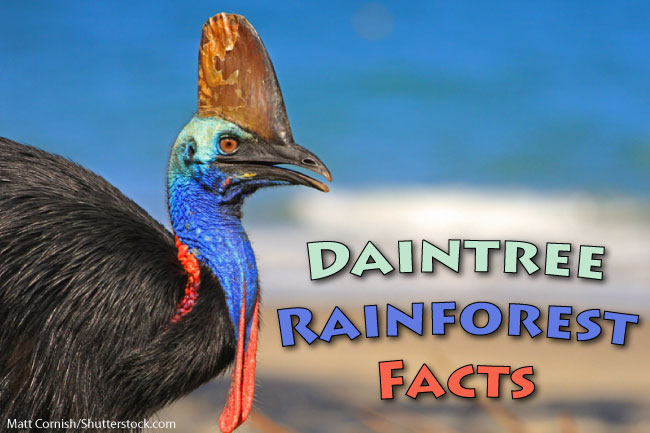 There is nowhere on Earth quite like the vast Daintree Rainforest. This glorious tropical rainforest sits on the north-eastern coast of Australia, in the state of Queensland. It runs from Mossman George in the south to the Bloomfield River north of the city of Cairns.

Covering around 1,200 square kilometres (463 square miles), Daintree Rainforest is the biggest continuous stretch of tropical rainforest in Australia. North of the Daintree River the forest grows right down to the sea.

The wonderful natural setting and the incredible diversity on show here have made it a top tourist attraction, as well as being an important conservation area. The Daintree Rainforest is included in the UNESCO recognised zone known as the ‘Wet Tropics of Queensland’ World Heritage site.

Watch the video below to see some of the animals and plants that live in Daintree Rainforest.

Daintree Rainforest is regarded as being one of the oldest and most complex rainforests on Earth, dating back to around 180 million years ago. This makes it millions of years older than the likes of the Amazon rainforest.

It is believed that other tropical rainforests also grew in Australia millions of years ago. While other parts of the island became more arid (drier) over time, the climatic conditions in the North East of Queensland allowed the rainforest here to remain.

Daintree Rainforest takes its name from English-born photographer and geologist Richard Daintree, who carried out a lot of important exploratory work in this region in the 19th century.

However, it was 1873 before the mighty Daintree River was discovered by European explorers. Scottish geologist George Elphinstone Dalrymple is credited with coming across the river and naming it after Richard Daintree, who was by then working in England promoting Queensland as an immigration destination. In 1933 a road was built to the area. Prior to this it was only accessible by river.

The long history of Daintree Rainforest means that it is an important site for scientists to study the evolution of different species of plants and animals. There are living examples here of plants that have evolved differently elsewhere and are now only seen here.

While much of the rainforest is part of the Daintree National Park, there are also privately owned sections as well. A government scheme to buy this land for conservation purposes has seen large chunks of the region bought in the last few years.

More than 12,000 species of insect have been found here, including 230 species of butterfly. Also resident are 663 species of vertebrate animals and well over 200 species of land snails.

Among the many species of mammal that live in Daintree Rainforest are: platypus, echidna, bandicoots, possums, wallabies and kangaroos.

The rainforest’s amphibians include the white-lipped tree frog and the northern barred frog (there are 54 species of frog in total).

430 species of birds have been recorded in the Daintree Important Bird Area. This region covers 2656 km2 (1025 square miles) and includes Daintree Rainforest. It is home to many endemic species. (‘Endemic’ means that they aren’t found anywhere else.)

Considering that there are 898 recorded bird species in the whole of Australia, you can see how important the rainforest and surrounding areas are – almost half of Australia’s birds are found here!

Birds found at Daintree include bowerbirds, honeyeaters and of course, the southern cassowary.

The plants in this rainforest include many ancient species of enormous scientific interest. Among the most important finds to be made here was the re-discovery in the early 1970s of the Idiospermum Australiense, more commonly known by the name of idiot fruit.

These flowering trees can be dated back to when dinosaurs lived in Earth but they were believed to have died out altogether. It is now known that they still exist in a few spots in this part of Australia.

Important research on the history of medicinal plants is carried out here, to understand how the human use of certain species has evolved over time. Among the edible plants found here is the so-called Chocolate Pudding Fruit, which is also known as the Black Sapote.

There are plants at Daintree from just about every stage in the evolutionary process, making it an extremely popular destination for botanists.

The spotted-tailed quoll and Bennetts tree kangaroo are rated ‘Near Threatened’ on the IUCN Red List. The southern cassowary is rated ‘Vulnerable’.

Apart from the outstanding flora and fauna, the varied landscape is another factor that makes Daintree Rainforest such a fascinating place. The area here is filled with dramatic gorges, waterfalls, mountains, granite outcrops, rivers and streams.

There is also the fact that the tropical rainforest reaches down to pristine white sandy beaches here, with reefs nearby. This unusual and exciting combination makes it an almost unique setting in the world.

Mount Pieter Botte and Thornton Peak are among the prominent mountains here that offer terrific walking routes and panoramic views.

We hope that you have enjoyed learning about the beautiful Daintree Rainforest. It’s an incredible place, and home to some amazing plants and animals. Australians are very proud of their wildlife, and after seeing some of the amazing species at Daintree you can see why.

You can find out more about the world’s rainforests at our Rainforest Facts For Kids page – the ultimate guide to rainforests and the animals, plants and people that call them home.