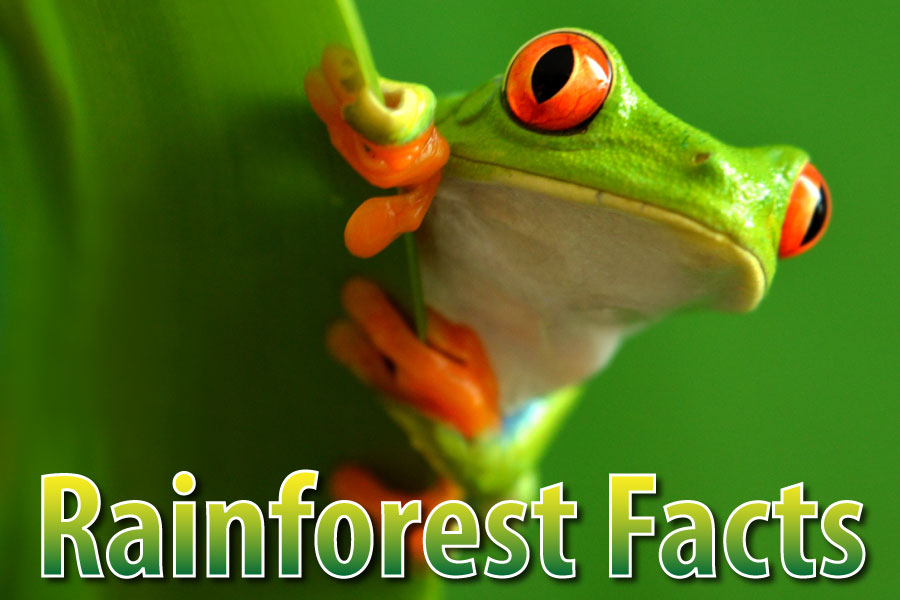 Welcome to Active Wild’s ultimate guide to rainforests and the animals, plants and people that call them home: rainforest facts for kids, students & adults. Read on to find out all about rainforests and why they’re so important…

Other Rainforest Articles at Active Wild

When you picture a rainforest in your head, you’ll probably be imagining a ‘lowland tropical rainforest’; just one of several types of rainforest.

If you picture a typical rainforest in your head then you’ll probably see huge green trees with leaves that are dripping with moisture. In their branches will be exotic birds such as toucans and macaws, and troops of monkeys will be filling the air with their cries. Beautiful but deadly predators will be on the prowl–perhaps a stealthy jaguar creeping through the undergrowth, or a magnificent harpy eagle gliding silently between the branches.

The scene above describes a lowland tropical rainforest. Lowland tropical forests are bursting with life of all colors, shapes and sizes; they’re among the most biodiverse* of all habitats. There are other types of rainforest; we’ll find out about them further down the page. All rainforests provide a home for a vast number of species.

* Biodiversity is the number of different species found in a particular area.

Even though rainforests only cover around 6 to 7 percent of the world’s landmass, they are home to more than half of its animal and plant species.

Many people also live in and around rainforests, and rely on them for food and shelter.

Despite this, rainforests are under threat, and many rainforest species are becoming endangered. The biggest threat to rainforests is deforestation for timber.

Rainforest Facts For Kids: All About Rainforests

What Is A Rainforest?

‘Rainforest’ is a term coined by German biologist Andreas Schimper in 1898, after he had studied forests in South America and Asia.

Fact: To be a rainforest, an area needs to have a high yearly rainfall: typically over 200 cm (79 inches) per year.

As the name suggests, rainforests are forests that grow in places in which there is a lot of rainfall.

If you can imagine two tall men, with one standing on the other’s shoulders, then that’s still not quite as high as the amount of rain that could fall in a rainforest in one year.

The moist and hot environment provides an ideal growing environment for trees and plants, which in turn provide food and shelter for a multitude of animal species.

Fact: There are two main types of rainforest: tropical rainforests and temperate rainforests.

Tropical rainforests are hot, as well as wet, and are found near the equator all around the world.

Temperate rainforests are found in cooler parts of the world, but where there is still high rainfall.

We’ll find out where in the world these two types of forest are found lower down the page.

There are several different types of tropical rainforest. Often, they merge into each other without definite boundaries.

Lowland rainforests are the ‘typical’ dense and humid rainforests that people imagine when they think about rainforests. They occur in non-mountainous regions.

Flooded, or swamp forests are found where there is poor drainage and / or seasonal flooding. Here, much of the land is submerged for at least part of the year.

Cloud forests and montane forests are found at high altitudes and are often shrouded in mist. They are cooler than tropical rainforests, and home to a different range of creatures and plants.

Rainforests have a number of different layers. Each layer provides a different habitat for a range of species.

The emergent layer is the highest rainforest layer. It is where the tops of the tallest trees break out from the surrounding vegetation. Eagles and other birds survey the forest from the highest perches, and blue morpho butterflies flutter over the trees.

The next highest layer is the canopy. It is the treetop layer, being formed by the branches and leaves of most of the trees that grow in the rainforest. It is around 30 meters (100 feet) high.

The canopy layer receives the most light of all the rainforest layers (up to 99% of the sunlight), and prevents light from reaching the lower layers.

Fact: Most of the species in a rainforest live in the canopy layer.

The canopy layer is home to most of the animals that live in the rainforest. It provides shelter and food for an incredible number of species.

Plants in the canopy layer tend to have broad, waxy leaves with pointed tips. This encourages rainwater to run straight off, preventing harmful algae and fungi from growing on them.

The understory is made up of bushes and shorter trees. It is a dark, hot place. The plants here tend to have large leaves to capture what little sunlight gets through.

Jaguars may laze around in its branches, and boa constrictors lay in wait here, ready to pounce on unsuspecting prey below.

Fact: The biggest rainforest animals live on the forest floor.

Covered by a layer of dead leaves, the forest floor is home to the rainforest’s biggest animals and also to many insects.

Here tapirs wander between the trees, using their snouts to rummage through the soil. Lines of leafcutter ants form between their huge nests and the trees whose leaves they harvest.

Rivers and streams often run through rainforests, draining excess water away and providing yet another habitat for many kinds of animal. Many animals come to the waterside to drink, and green anacondas slip through the water using their natural camouflage and excellent swimming skills to capture their prey.

Where Are Rainforests Found?

Fact: Tropical rainforests are found near the equator.

Tropical rainforests are found near the equator, which is an imaginary line that circles the middle of the globe.

Most of these rainforests are located between the tropics of Cancer and Capricorn, which are two other imaginary lines that run parallel to the equator above and below it. The area is known as ‘The Tropics’ – hence tropical rainforest.

Near the equator there is very little variation in temperature and day length throughout the year. It is hot all year round. However, many places in the tropics have rainy seasons, during which there is even more rainfall than at other times of the year.

Fact: The Amazon Rainforest is the world’s biggest (and most famous) rainforest.

Temperate rainforests are found further away from the equator, in cooler climates. They are usually located in coastal regions.

Animals That Live In The Rainforest

The rainforest is an extremely important environment, being home to a vast number of animal and plant species. Mammals, amphibians, reptiles, birds and invertebrates are all present in great numbers.

Fact: More than 1.5 million species have been discovered living in the rainforest.

Fact: There may be millions more species in the rainforest that are still to be discovered!

Let’s take a look at a few of the animal species we do know about.

In South and Central American rainforests, howler and spider monkeys roam the branches, feeding on the abundant fruit growing in the canopy. Harpy eagles hunt in the trees, taking prey as large as sloths and monkeys. Toucans hop from branch to branch, and brightly coloured macaws catch the eye.

On the forest floor, anteaters mop up ants and termites, and predatory mammals such as ocelots and jaguars roam through the trees.

Larger mammals such as deer and tapirs are also present, as are reptiles, including boa constrictors and anacondas.

A similarly large range of animals live in other regions. In the rainforests of India, tigers are apex predators. Large animals such as sambar (a type of deer) and sloth bears live on the forest floor, while birds, including parakeets and the impressive great hornbill share the trees with Macaques, gibbons and lorises.

In African rainforests, you might see gorillas, elephants and okapi.

The rainforests on the islands of Borneo, Sumatra and New Guinea are home to several notable endangered species, such as orangutans, proboscis monkeys, clouded leopards and elephant, rhino and tiger subspecies.

Native tribes live in rainforests in Brazil, New Guinea and Central Africa. These tribes live deep in the forests, away from modern life. However, their way of life is under threat from outsiders who are gradually encroaching on their traditional home.

Why We Need Rainforests

Rainforests provide a habitat for a huge number of species, including some of the world’s most endangered animals.

Rainforests provide us with ingredients for many medicines.

Provided they are harvested responsibly, rainforests can provide food, timber and other products useful to man.

Rainforests help to regulate the world’s climate and rainfall. They also store large amounts of carbon. If the rainforests are destroyed and left to rot, the carbon can be released as carbon dioxide – a harmful greenhouse gas.

Here’s a quick question: When you think about being in the rainforest, wandering around under the green canopy and seeing toucans and macaws flying around over your head, do you feel happy and contented, or sad and angry?

Thought so! Just thinking about rainforests improves your mood!

Rainforests are beautiful places, and our quality of life is improved by their presence. Even if we never actually get to walk in a rainforest, we can see pictures of them, and learn about the animals and plants that live in them. Because this benefit cannot be measured, it is often overlooked, but it is another important reason that rainforests – and all wild places – are important.

Fact: Rainforests used to cover 14% of the land on the Earth. Today they cover around 6%

Sadly, rainforests are under threat all over the world. More than half of the world’s rainforests have been destroyed since 1945.

Every second, an area of rainforest the size of a football (soccer) pitch is cut down.

Most of the trees are cut down for timber. This is used in building, and also for power production and for paper.

Rainforests are also destroyed to make way for farms. The trees are cut down to make fields, in which crops such as sugar cane and oil palm trees are grown, and livestock kept. Predatory rainforest animals are sometimes hunted by farmers wishing to protect their livestock.

In this article we have found out all about rainforests. We have found out what they are, where they are located, the animals and people that live in them and why we need to protect them. We’ve also learned about the threat of deforestation.

If you found this article useful then tell your friends about it, link to it, and share it on social media using the buttons provided!