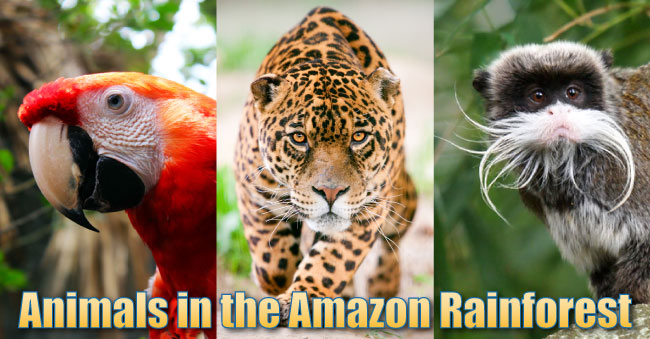 The number of animals in the Amazon Rainforest is huge. It is estimated that the region is home to one tenth of all of the Earth’s species. On this page you’ll find information, pictures and facts about just some of the amazing animals that live in the world’s biggest rainforest.

The Amazon Rainforest is home to many incredible species, including Leafcutter Ants, which eat more vegetation than any other rainforest animals, and mammals such as the fearsome Jaguar, top of the Amazon food chain.

This page contains a list of animals in the Amazon Rainforest, with information about each species.

Alphabetical list of animals that live in the Amazon Rainforest.

The Amazonian Manatee is a freshwater aquatic mammal that lives in the rivers of the Amazon Basin. It has flippers on either side of its cylindrical body, and a flat paddle to propel it through the water. The Amazonian Manatee’s closest relative is the elephant.

There are four species of anteater: the Giant Anteater, Silky Anteater, Northern Tamandua and Southern Tamandua. They are all in the suborder Vermilingua, which means ‘worm-tongue’. This name comes from their long, sticky tongues, which they use to eat many thousands of ants in a day.

The Anaconda, also known as the Green Anaconda, is the world’s largest and heaviest snake, although not the longest. One of the most feared animals in the Amazon Rainforest, the anaconda is an expert swimmer and never found far from water.

‘Blue Morpho’ is a name for several blue-coloured butterflies of the morpho genus. The Blue Morpho’s wings are so bright that they can be seen by pilots flying over the rainforest. One of the most beautiful animals in the Amazon Rainforest.

The Bullet Ant gets its name from its painful sting: victims say it’s like being shot! Some rainforest tribes use the ant’s sting as an initiation test to become a warrior.

Caimans are carnivorous reptiles that live in the rivers, streams and swamps of the Amazon Rainforest. There are six species of caiman. The most common caiman is the Spectacled Caiman, and the biggest is the Black Caiman.

The capybara is the world’s biggest rodent. Never found far from water, they use the rivers and streams of the rainforest to find food and as a refuge from predators.

The electric eel is one of the most unique animals in the Amazon Rainforest. It is able to generate an electric charge from its body, used both to stun its prey and for self-defence. Although generally non-lethal to humans, the shock is extremely painful. Electric eels aren’t actually eels: in fact they’re ‘Knifefish’, an order of South American fish.

The giant otter is a carnivorous mammal in the weasel (Mustelidae) family. It can grow up to 1.7 metres in length. The giant otter hunts fish and other animals (including small caimans) in the Amazon River. It is itself hunted for its smooth pelt, and due to this and to habitat loss is now endangered.

The harpy Eagle is a large bird of prey that hunts in the Amazon Rainforest canopy. It is the heaviest and most powerful raptor in the Americas. Sloths and monkeys form part of its diet.

The Hoatzin is a pheasant-sized bird that lives in swamps, mangroves and other habitats near water. It has an enlarged crop, in which food is digested. This gives the bird an unpleasant smell, leading to its nickname of ‘stinkbird’. Hoatzin chicks have claws on their wings that are used to climb trees.

Jaguars are apex rainforest predators (they don’t have any natural predators). They are the third biggest of the big cats (only tigers and lions are bigger), and masters at stealth and ambush hunting.

Leafcutter Ants may be some of the smallest animals in the Amazon Rainforest, but they are among the most incredible. They are responsible for consuming more vegetation than any other animal. Leafcutter ants live in huge colonies: sometimes of several million members.

Macaws have bigger bills, longer tails and paler faces than other parrots. Several species of macaw are found in the Amazon Rainforest, including the Scarlet Macaw (whose coat is red, blue and yellow), the Blue and Yellow Macaw, and the Hyacinth macaw (one of the largest species of parrot).

The Amazon Rainforest is home to many species of monkeys. They range in size from the miniature pygmy marmoset (the world’s smallest monkey) to the large – and very noisy – howler monkeys. Howler monkeys are the loudest animals in the amazon Rainforest. Other species of monkey in the region include Bald Uakaris, Capuchins, Spider Monkeys, Squirrel Monkeys and Tamarins.

One of the most feared animals in the rainforest, the piranha is actually just as likely to be the prey as the predator. This big-toothed fish lives in shoals in Amazon rivers and lakes. Piranhas can have ‘feeding frenzies’, in which the fish swarm around their prey, stripping it of flesh in minutes.

Tapirs are large land mammals. Of the five species of Tapir, only the Malayan Tapir is not found in South America. (The Malayan tapir is found in Asia.) The Lowland Tapir (also called the Brazilian Tapir or South American tapir) is the largest land animal in the Amazon region. Tapirs are instantly recognisable by their flexible snouts, which look like miniature elephant trunks.

Macaws are familiar rainforest birds. They are known for their large, often colourful bills. The rest of their plumage (feathers) is also often colourful. These fruit-eating birds are usually found in the canopy layer of the rainforest.

Animals In The Amazon Rainforest Conclusion

We hope that you have enjoyed finding out about just a few of the many animals in the Amazon Rainforest.

You can find out more about rainforests at our main rainforest page.

Or, learn more about the Amazon Rainforest here.

There are many charities that help preserve and protect the Amazon Rainforest. One of these is the World Land Trust; there are many more. Why not find a charity whose work you believe in and see what you can do to help?